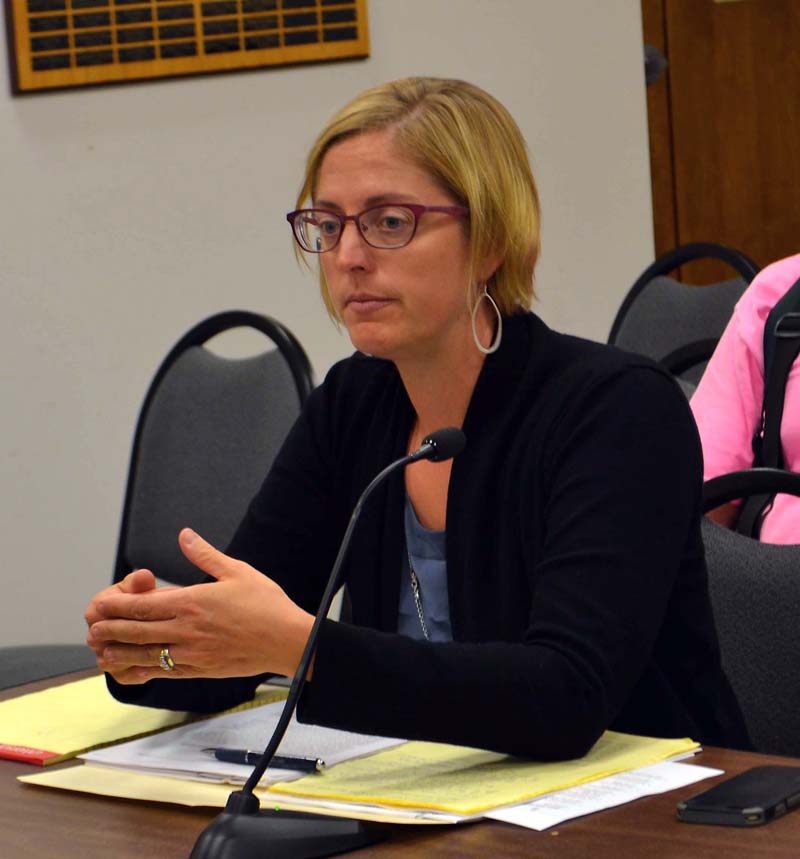 Damariscotta town attorney Jenny Villeneuve discusses a petition for a moratorium on commercial development during the Damariscotta Board of Selectmens meeting Tuesday, Sept. 19. (Maia Zewert photo)

Damariscotta voters will consider a moratorium on retail development during a special town meeting by referendum Nov. 7.

While the Damariscotta Board of Selectmen voted to place the moratorium before voters after a discussion with town attorney Jenny Villeneuve and Town Manager Matt Lutkus Tuesday, Sept. 19, members of the board expressed legal concerns about the vague language in portions of the petition.

The petition, which was initially submitted to the town Aug. 7 , calls for a temporary ban on new retail buildings of larger than 2,500 square feet and on any new construction, expansion, or use that requires approval under town ordinances. Residents submitted the petition to the town days after the selectmen decided against pursuing a moratorium on commercial development.

After receiving questions about whether it was a conflict of interest for planning board members to circulate a petition for a development moratorium during the review process for development applications, the town contacted the Maine Municipal Association’s legal services department for an opinion.

In an email response, MMA staff attorney Breana Gersen said the rest of the planning board can vote to decide whether a member who has chosen not to voluntarily recuse themselves has a conflict of interest in a matter before the board.

In light of the MMA’s response, town officials will recommend to the planning board that the member and alternate who collected signatures for the moratorium petition recuse themselves “from planning board activities and decisions that deal with retail development,” Damariscotta Board of Selectmen Chair Robin Mayer told the audience.

The planning board is currently reviewing a proposal from a Portland developer to build three commercial buildings with room for a total of six businesses at 435 Main St.

In his notes to the selectmen, Lutkus said the petition appeared to have been prepared using a 1997 ordinance from another town as a template, resulting in the need for clarification from Villeneuve. One issue is whether the circulators intended for the moratorium to apply solely to retail development or to all zoning-related actions, including those affecting residential projects.

While summarizing Villeneuve’s memo to the selectmen about the petition’s language, Lutkus said the wording was “very confusing,” but both Villeneuve and an attorney from MMA have concluded that the petition points to retail development as the moratorium’s focus.

“The portion in question does not have an adjective for retail in there, so a strict view of that would say that this is a pretty open-ended phrase, but in our consultation with legal counsel at MMA and Jenny, the perspective is that this is pretty much restricted to retail development,” Lutkus said.

If the selectmen feel the petition is too vague, they could put forth an alternate ordinance for voters to consider, Villeneuve said.

But Mayer said the town would not have time to develop an alternative by Nov. 7, due to the time constraints of holding public hearings, making absentee ballots available, and providing adequate notice.

Another concern expressed by the board was whether the moratorium language demonstrates a “statement of emergency,” which is required by state statute, Villeneuve said.

Mayer read a portion of the petition that states the town is “suddenly under threat of increased development pressure from large-scale retail development.”

“Development is not a threat,” Mayer said.

Selectman Mark Hagar also said he does not agree that retail development poses a threat to the public health, safety, and welfare of residents, another statement in the petition.

Damariscotta Planning Board alternate Dana Orenstein asked if there would be any legal ramifications if the moratorium prevents a developer from moving forward with a project.

After a half-hour closed-door session to consult with Villeneuve about possible legal risks to the town, Mayer made the motion to schedule the special town meeting by referendum concurrent with the statewide referendum Nov. 7. Selectman Amy Leshure, who was one of the circulators of the petition, seconded Mayer’s motion.

Selectmen voted 4-1 to schedule the special town meeting with Hagar opposed. Later in the meeting, Hagar said he voted against putting the moratorium ordinance before the voters due to the way the petition was written.

“We really need this commercial growth. I understand the need to look nice, and the developer was open to it, but personally, I would really like to see people get involved with this process,” Hagar said.

The town will hold public hearings on the moratorium Oct. 16 and Oct. 17. Absentee ballots will be available starting Oct. 6.

The proposed moratorium will be posted on the town website, Lutkus said. Copies will also be available at the town office.