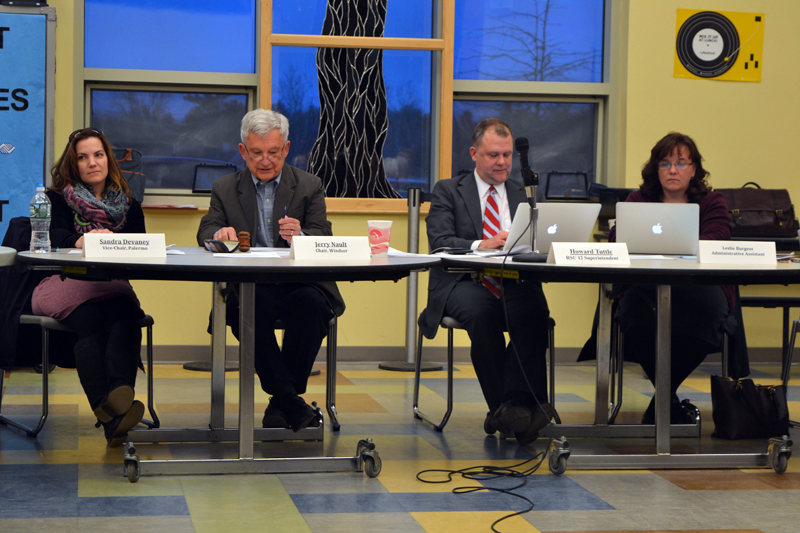 A discussion of Alna’s petition to amend the RSU 12 Reorganization Plan to restrict K-8 school choice in Alna dominated the RSU 12 Board of Directors meeting at Chelsea Elementary School on Thursday, April 12.

Alna’s petition seeks to amend a section of the reorganization plan to reflect Alna voters’ recent decision to limit K-8 school choice to public schools. The change would not apply to children living in Alna as of June 30.

All six people who signed up for the public-comment period – including Alna resident Ralph Hilton, who submitted the original petition for the town referendum on school choice, and Alna Third Selectman Doug Baston – spoke on the topic of Alna’s petition.

“Careful deliberation and study would avoid those pitfalls,” Villeneuve said, adding that the financial impact to each of the RSU 12 towns needs to be determined.

Shanon Cotta, also of Alna, spoke of “the potential of dividing families and siblings.” Cotta expressed concern that some family members – those born after June 30 – would not be able to attend the same school as their siblings.

Hilton said he would like to see the board vote yes on the first reading of the petition.  “Therefore, it will be here next month for the second reading … Or it won’t get a fair hearing. It’ll die,” he said.

“The purpose here is to honor the citizens of Alna and their vote,” Baston said.

A lengthy discussion among board members ensued when it was time for them to weigh in on the first reading.

Board member Christopher Johnson, of Somerville, expressed concern about the impact the Alna school-choice change might have “on students in the other schools, in other towns.”

Johnson also voiced concern about “down-the-road effects” of the change, including “costs that could be incurred because of legal challenges.”

Board member Richard DeVries, of Westport Island, questioned how residency would be determined for potential private-school students living in Alna up to and including June 30.

RSU 12 Superintendent Howard Tuttle said residency would be established if the parent and child are living and sleeping in Alna.

“We are just trying to determine, do they actually live there?” Tuttle said. Documents such as a voter registration, a rental agreement, and a car registration are among those that would be accepted, Tuttle said.

“I feel that Alna has done its job,” Johnson said. “We owe them an answer … I’d like to see us have a subcommittee to identify questions and find answers.” 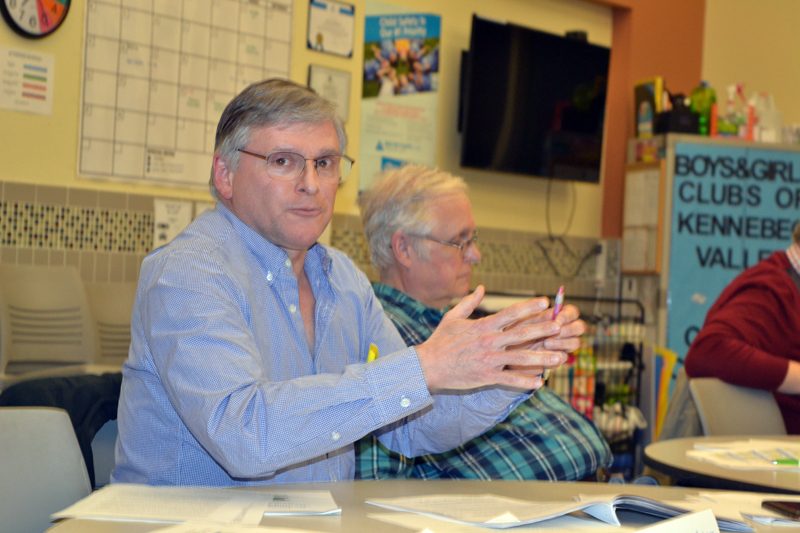 From left: RSU 12 Board of Directors member Christopher Johnson, of Somerville, addresses the audience at the board’s meeting Thursday, April 12 as board member Tom Birmingham, of Windsor, looks on. (Christine LaPado-Breglia photo)

The first reading of the petition, which needed 7,406 weighted votes to pass by the necessary two-thirds majority, passed with 7,943 votes. The weighted system is based on the population of the district’s seven towns.

The board formed a five-member ad hoc committee to research the Alna school-choice question, with a two-week turnaround time to come up with its conclusions, as RSU 12 board Chair Jerry Nault pointed out.

Board member Keith Marple, of Whitefield, said, “It seems like two weeks is unreasonable to do that work,” calling such a time frame “a rush job.”

The ad hoc research committee had its first meeting Monday, April 16 at the RSU 12 central office in Somerville.

“It was obvious that we had not provided enough background information to the board,” said RSU 12 board member Barbara Baston, of Alna, in a phone interview Friday, April 13. “I think we made assumptions that they understood more than they apparently do about the referendum from Alna’s point of view.”

In May, said Baston, “the entire board … will vote again on sending Alna’s referendum question to all the voters in the RSU 12 in June … This is the procedure for change to the consolidation agreement.”

“We thought it would be smoother approval than it turned out to be,” Baston said. “I hope that the committee process will clarify things for the rest of the board so that people will feel comfortable voting in May.”

In other business, the board accepted the amount of the finance committee’s recommended 2018-2019 general education budget, $22,223,292.38, with the stipulation that certain changes be made in how the money would be allotted.

Marple stressed the importance of writing a math coach into the budget, as Whitefield Elementary School students have had “flat math results” for some time. “I’d like to see that number move,” he said.

Others on the board, including Terri Blair and Tara DeLisle, also of Whitefield, agreed with the desirability of a math coach.

“I honestly missed the boat on everyone wanting a math coach last time (we discussed the budget),” said Tuttle.

“The board passed the dollar amount as presented, but indicated a desire to add a math coach, remove the amount for the food service director, and to reduce the pre-K local funding requirement by $30,000,” Nault said in a recent phone interview. “It’s a reasonable budget — and in a year where the state has shifted more funding to the local towns. The increase per student is somewhere in the neighborhood of 1.6 percent.”

Nault said the next RSU 12 Board of Directors meeting is currently scheduled for Thursday, May 10, “but it may shift earlier depending on warrant signing and posting requirements.”