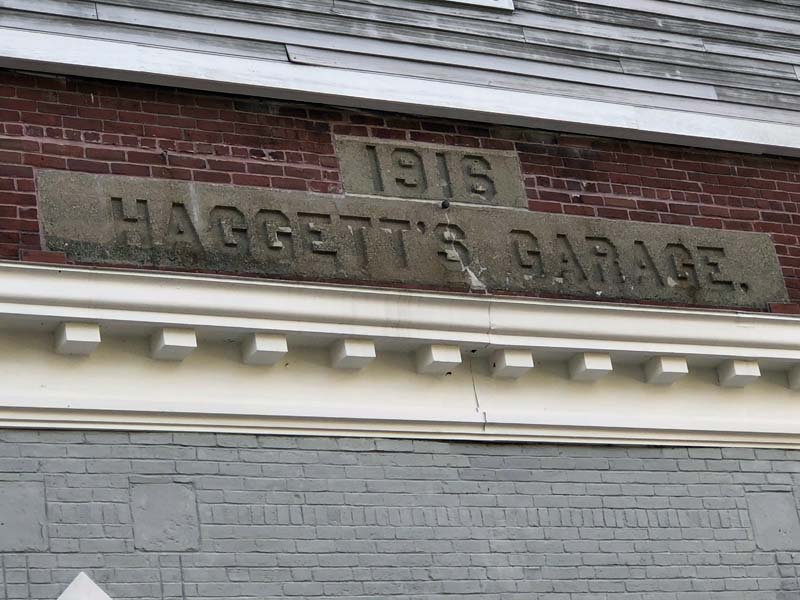 A subcontractor will remove the Haggett’s Garage sign and the bricks around it before it demolishes the 1916 building to make room for a parking lot. (Charlotte Boynton photo)

The Maine Department of Transportation expected a subcontractor to start work on the demolition of Haggett’s Garage in Wiscasset on Wednesday, Sept. 5.

The demolition had been scheduled to begin Tuesday, Sept. 4, but was delayed because the subcontractor, St. Laurent & Son Inc., did not have a certificate of insurance, according to DOT spokesman Ted Talbot.

St. Laurent & Son Inc. is a subcontractor of Pike Industries Inc., the contractor for the DOT’s downtown project.

The DOT expects St. Laurent to first remove the historic Haggett’s Garage sign and the bricks around it. When the demolition of the building starts will depend on how long it takes to remove the sign, according to Talbot.

Haggett’s Garage, at 36 Water St., was built in 1916 and was reportedly New England’s first Ford dealership. On Tuesday, Craig Haggett, a descendant of the building’s original owner, was taking photos at the building.

Because of the building’s age and location in a historic district, the DOT faced opposition to the demolition. The DOT plans to turn the property into a parking lot to replace spaces it will remove from Main Street.

The fate of the building was a factor in lawsuits against the DOT by the town and a downtown property owner, leading the DOT to remove the demolition from its plans for the downtown project.

However, after Wiscasset voters chose to abandon the town’s lawsuit in April, town officials asked the DOT to restore the construction of the parking lot to its plans.