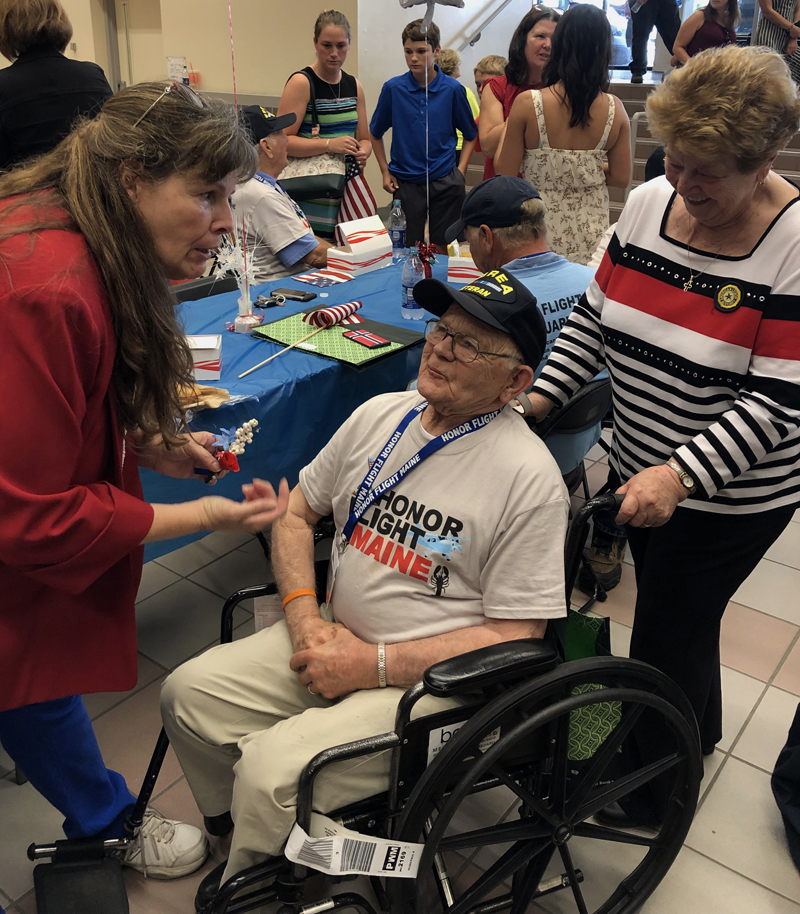 American Legion Auxiliary State President Virginia Chaput greets Robert Fairfield, a U.S. Army veteran of the Korean War, with Charlotte Boynton upon Fairfield’s return to the Portland International Jetport on Sept. 22. Chaput presented Fairfield with a red poppy, a symbol that honors the sacrifices of veterans and those who died in war. (Photo courtesy Kathleen Onorato)

A local businessman and former Wiscasset selectman was one of 33 veterans to receive a hero’s welcome upon his return from a trip to Washington, D.C. with Honor Flight Maine.

Robert Fairfield is a U.S. Army veteran of the Korean War. Fairfield operated restaurants and other businesses in Damariscotta and Wiscasset and served the town of Wiscasset in various roles. He now lives in Woolwich.

Fairfield called the Honor Flight Maine experience the trip of a lifetime.

“We felt like royalty from the time we got to the airport until we landed in Portland Sunday afternoon, with our every need taken care of,” Fairfield said. “They really took good care of us.”

The veterans left the Portland International Jetport the morning of Friday, Sept. 20, each with a guardian. The guardians must pay $500 each to cover their own expenses.

An affiliate of the national Honor Flight Network, Honor Flight Maine flies veterans to D.C. at no cost to visit memorials. The nonprofit gives priority to aging and terminally ill veterans.

William Cressey, of Wiscasset, was the guardian for Fairfield. Cressey, a veteran of the Vietnam War, has visited the Washington memorials many times with his family.

“I would make the trip again,” he said. “Spending time with these veterans and witnessing their emotions at their memorials is something I will never forget.”

The veterans arrived at the Baltimore airport and boarded buses, which received a police escort with lights and sirens to their destinations throughout Baltimore and Washington, D.C., ending at Fort Meade, where they ate dinner before going to their hotel, the Hilton Baltimore.

Early Saturday morning, after breakfast, the group began its tour. The veterans watched the changing of the guard at the Tomb of the Unknown Soldier at Arlington National Cemetery; saw a wreath-laying ceremony; visited the World War II, Korean War, and Vietnam War memorials; went to the U.S. Marine Corps War Memorial and the Lincoln and Washington memorials, and many more.

During the tour, people greeted the veterans and thanked them for their service, shaking their hands and requesting photos. “Everyone made us feel like we were very important people,” Fairfield said.

The weekend was topped off with a homecoming parade through the Portland airport. A bagpipe band led the parade, followed by several marching units, veterans organizations, and young children carrying the service flags for each military branch, all in an airport terminal filled with family and friends clapping, waving flags, and shouting out as the veterans passed by. 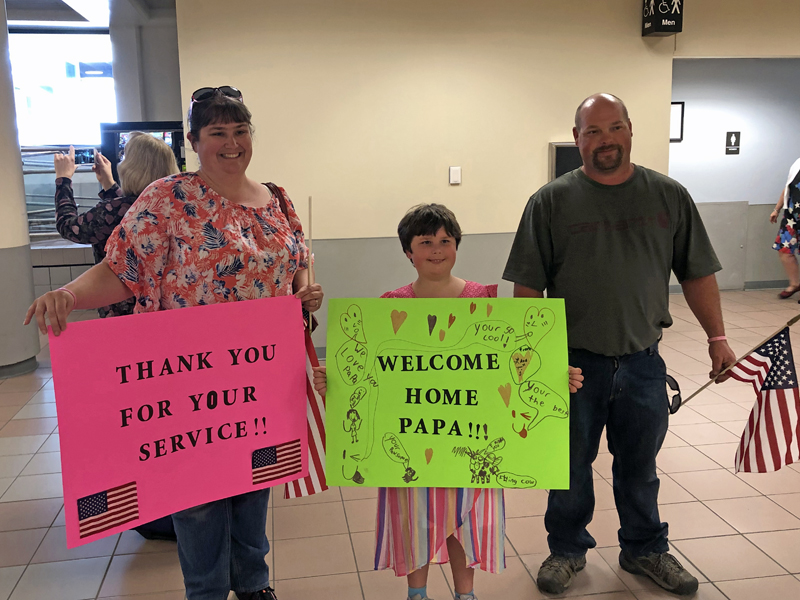 After the parade, Honor Flight Maine hosted a reception at the airport for family members and friends to greet their veterans.

Fairfield is a 1950 graduate of Wiscasset Academy. When he came home from the service, he married Kathleen “Kay” Bronson. They were married 52 years until she passed away in 2007.

Many people have enjoyed Fairfield’s cooking and his friendly personality. He opened his first restaurant on Water Street in Wiscasset, The Homestead Restaurant, in the mid-1950s. Later he moved to Damariscotta and opened The Diner, followed by The Diner’s Restaurant in the present-day location of the Skidompha Secondhand Book Shop.

In the early 1970s, he decided to move back to Wiscasset, where he had lived since he was 10. He operated the Quik Stop on Gardiner Road, then the Village Cafe next door.

After selling the Quik Stop, he worked for a couple of years as the chef at the Bath Memorial Hospital before opening Fairfield’s Restaurant on Route 1 in Wiscasset. After finally retiring from the restaurant business, he cooked and delivered Meals on Wheels to people in the area.

His volunteer service to the town includes time on the budget committee, ordinance review committee, and planning board. He was twice elected to the board of selectmen. 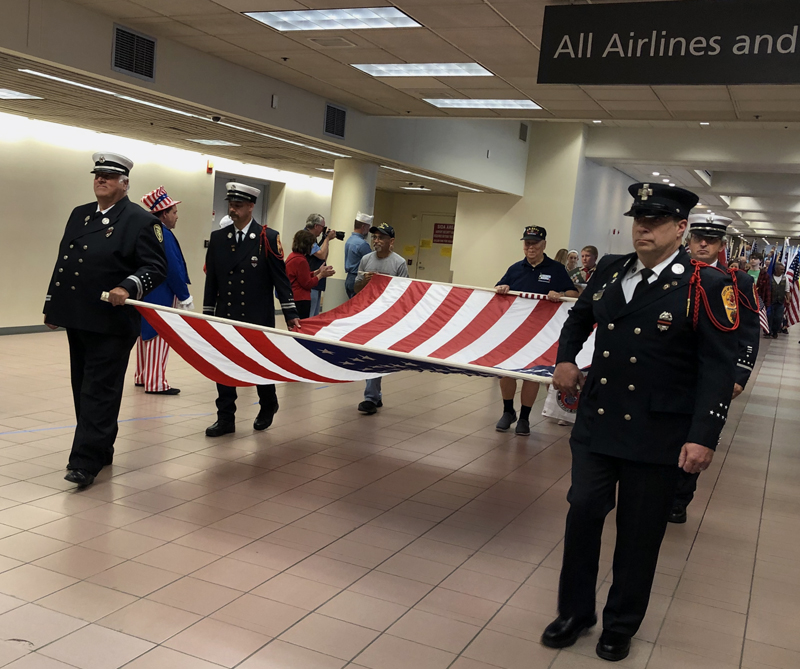 Honor Flight Maine not only looks out for veterans on the flights, but also for family members who want to attend the homecoming ceremonies. Arrangements are made for visitors to park at no cost and take buses to and from the airport.

The next Honor Flight Maine trip is scheduled for Oct. 27, with Honor Flight Network co-founder Earl Morse on the flight.

News Center Maine, Channel 6 in Portland, will hold a telethon to raise funds for Honor Flight Maine from 5 a.m. to 7 p.m. Nov. 21.

“The trip was an experience of a lifetime,” Fairfield said. “I am so thankful for being given the opportunity to go. It is something I will always remember.”

(Editor’s note: The reporter, Charlotte Boynton, is the partner of Robert Fairfield and mother of William Cressey.)