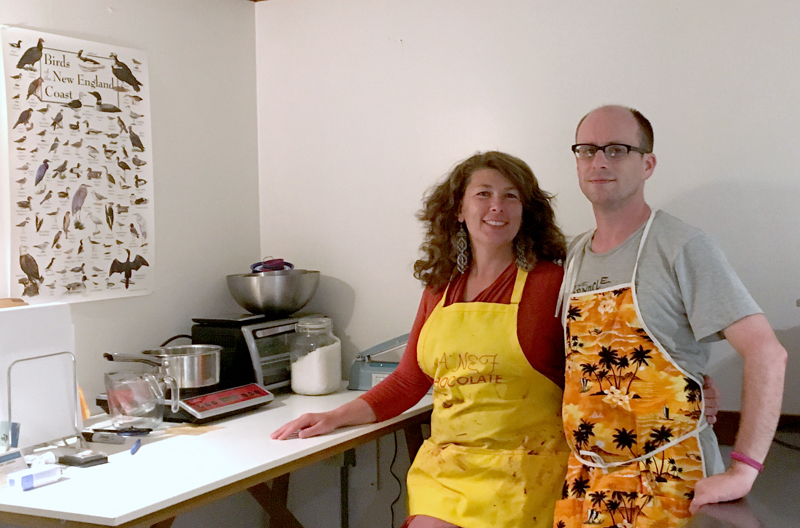 The idea for the business grew out of a desire to find year-round work, Dylan said. Dylan works at The Barnacle Cafe during the summer, while Mandy is the teacher at the island’s school. Both had been seasonal visitors to the island before moving to Monhegan year-round a few years ago.

The couple was inspired by Monhegan Brewing Co. owners Matt and Mary Weber and the success the brewery found on the island. Another island couple, Mott Feibusch and Carley Mayhew, were starting their new business, Monhegan Coffee Roasters.

“Both the brewery and the coffee were such brilliant ideas and it got us thinking, ‘What can be our beer or our coffee?’” Dylan said. “Chocolate is something most people love, it’s something that hasn’t been made on the island before, and it’s something we could be infinitely creative with because there are endless possibilities. … It was such a great idea that if we didn’t do it, someone else would.”

Dylan, an artist and a musician, has always been “entrepreneurial and endlessly creative,” Mandy said. “This was right in his wheelhouse.” 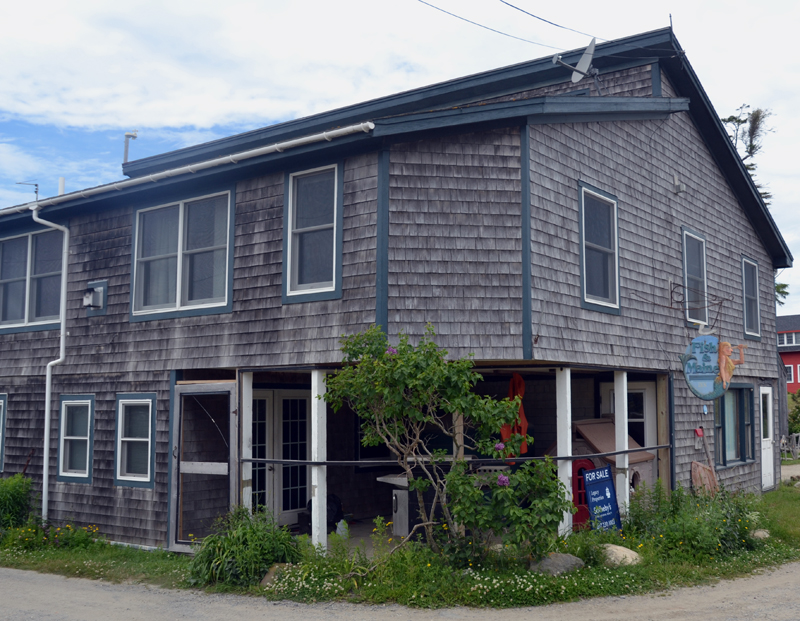 The exterior of the Fish & Maine building, at 225 Monhegan Ave. on Monhegan Island. Both La Nef Chocolate and Monhegan Coffee Roasters are on the first floor. (Maia Zewert photo)

Over the winter, Dylan completed a course through Ecole Chocolate to become a chocolatier. While chocolate makers create chocolate, a chocolatier makes chocolate candies, Mandy said. “What we’re doing is taking really nice chocolate and turning it into something new,” she said.

The name of the business dates back to 1605, when explorer Samuel de Champlain named Monhegan “Isle La Nef,” Dylan said. “La Nef” was intended to mean “the ship” and is believed to have been a reference to the shape of the island, Dylan said.

“We thought it was a way to connect the name to Monhegan and tie it into the island’s history and it still sounds fancy and French, as chocolate should,” Dylan said.

After considering and rejecting the idea of renovating their home kitchen to accommodate the business, Dylan and Mandy started looking for space on the island that met their needs.

Around the same time, they learned that Feibusch and Mayhew were facing the same obstacle finding space for Monhegan Coffee Roasters.

“When we got to talking about it, we realized it made sense for us to go in on the space together and share the cost,” Mandy said. “It really helped to reduce the upfront costs and we were able to help each other with our different skill sets.”

Monhegan Coffee Roasters and La Nef Chocolate share space on the first floor of John and Winnie Murdock’s Fish & Maine building, at 225 Monhegan Ave. La Nef uses the space for production and does not plan to use it as a retail space, Mandy said. 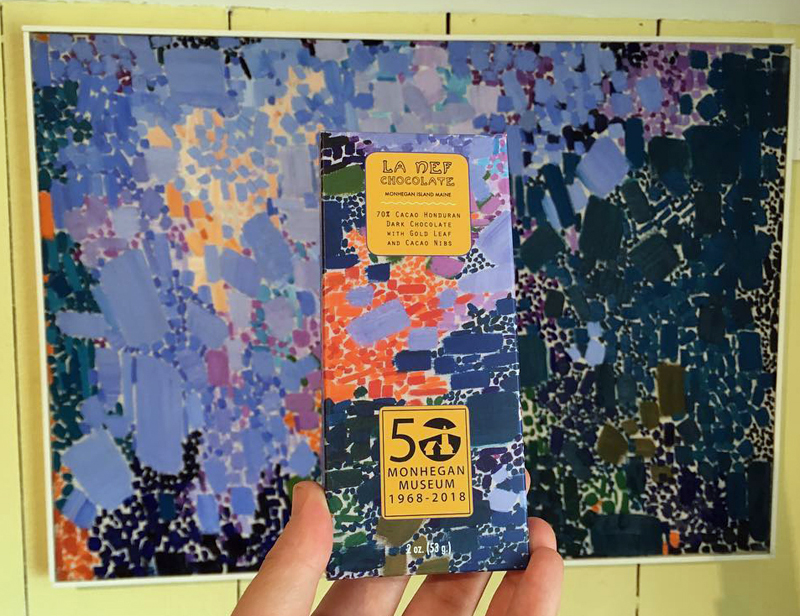 “As far as growth, our philosophy is to start small and grow into a larger company,” Mandy said. “Right now, we’ve got other jobs and responsibilities, so when we’re in there, we need to be focused on production.”

Working with chocolate poses a unique set of obstacles.

“Chocolate can be very temperamental. There are so many things that can go wrong between the humidity and the temperature,” Mandy said. “There are all of these variables – the temperature of the room, the bowl, the fridge – they’re all hard to control out here. It’s hard work, but we’re making it work the best we can.”

La Nef Chocolate debuted its first chocolate bar in late July to celebrate the Monhegan Museum’s 50th anniversary. The bar, a Honduran dark chocolate with cacao nibs and gold leaf, is wrapped in packaging based on a 1962 painting by the late Monhegan artist Lynne Drexler. 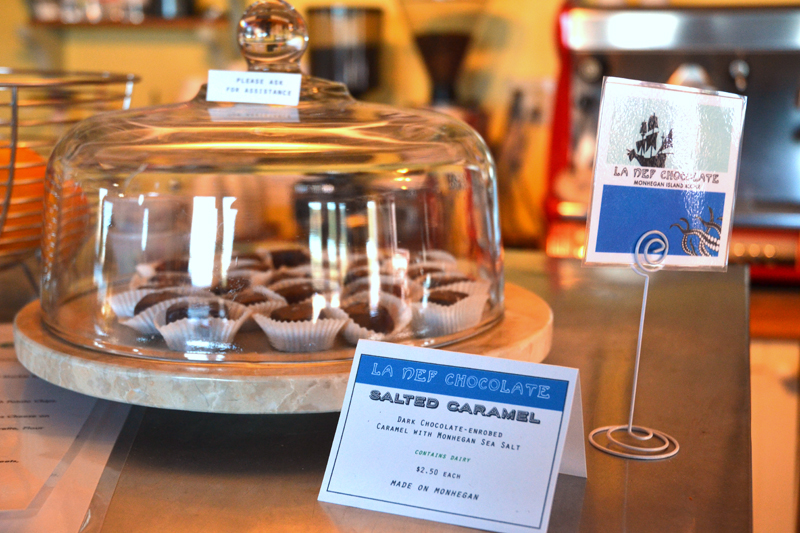 Building on the success of the first chocolate bar, La Nef Chocolate recently introduced two new bars: a white chocolate bar with roasted pistachios and dried cherries and a milk chocolate with toasted almonds. The couple plans to use paintings by local artists for the packaging, Mandy said.

La Nef Chocolate is available at three locations on the island. Monhegan Brewing Co. carries truffles, the Monhegan Museum has bars, and The Barnacle Cafe sells bars, truffles, and “Sea Legs,” dark chocolate-covered candied ginger “for people who might be a little shaky getting off the boat,” Mandy said.

While high temperatures in the summer prevent La Nef Chocolate from sending bars and truffles off the island, Dylan said the couple hopes to start shipping chocolate in October.

“We won’t have very many people to sell to on the island at that point, so we’ll start concentrating on wholesaling to places on shore,” Dylan said. “There are a few phases to this and right now making stuff for Monhegan is the first phase. We’re still new and we don’t want to bite off more than we can chew.”

So far, the chocolate has received a positive reaction from both islanders and visitors.

“(Monhegan) is such a beloved place and people want to support the year-round community and help young entrepreneurs thrive,” Mandy said. “We’ve gotten positive feedback so far, and we hope to keep that going and build on it.”

For more information about La Nef Chocolate, go to lanefchocolate.com or find the business on Facebook and Instagram.