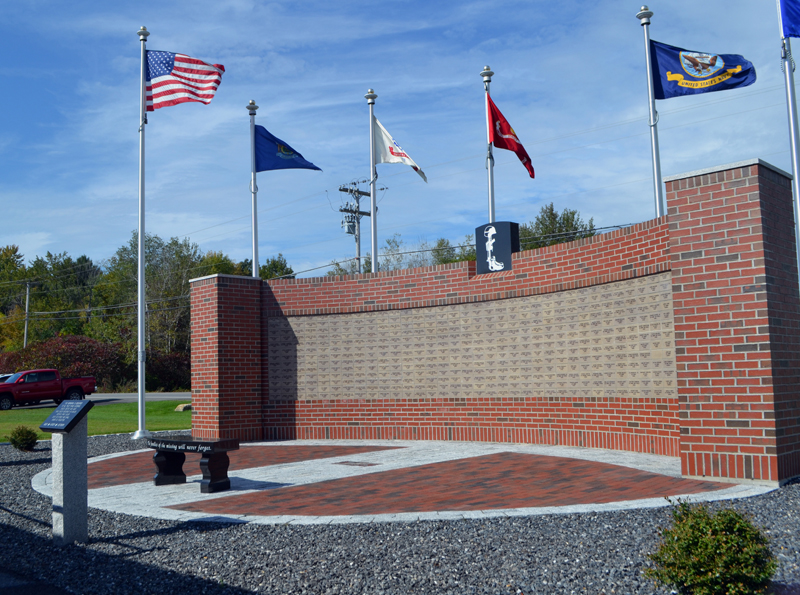 The new POW/MIA memorial at American Legion state headquarters in Winslow bears the names of Maine service members who are prisoners of war or missing in action, including six from Lincoln County. (Charlotte Boynton photo)

Representatives of the American Legion and Maine’s congressional delegation gathered at the Legion’s state headquarters in Winslow on Saturday, Sept. 28 to dedicate a new memorial to service members from Maine who went missing in action or were taken as a prisoner of war and remain unaccounted for.

There are 480 bricks on the memorial wall, with just one star so far. The star is on the brick for Pvt. Alberic Blanchette, of Caribou, a U.S. Marine Corps veteran of World War II whose remains were returned home the weekend of the groundbreaking ceremony. He had been missing in action for 74 years.

The dedication of the memorial was emotional for those in attendance. Several family members of those whose names are on the wall were there, shedding tears, kissing a brick with the name of their family member, and expressing appreciation to the Legion for providing a place for them to visit and honor their loved ones.

U.S. Rep. Jared Golden, D-Maine, a Marine Corps veteran of the Afghanistan War, spoke on the thoughts of a service member going into combat and the responsibility they have to their country and family.

Golden said he was more afraid of being taken prisoner than of being killed. The family of a service member who dies knows his or her fate and has closure. For the families of prisoners of war and those missing in action, there is no closure. 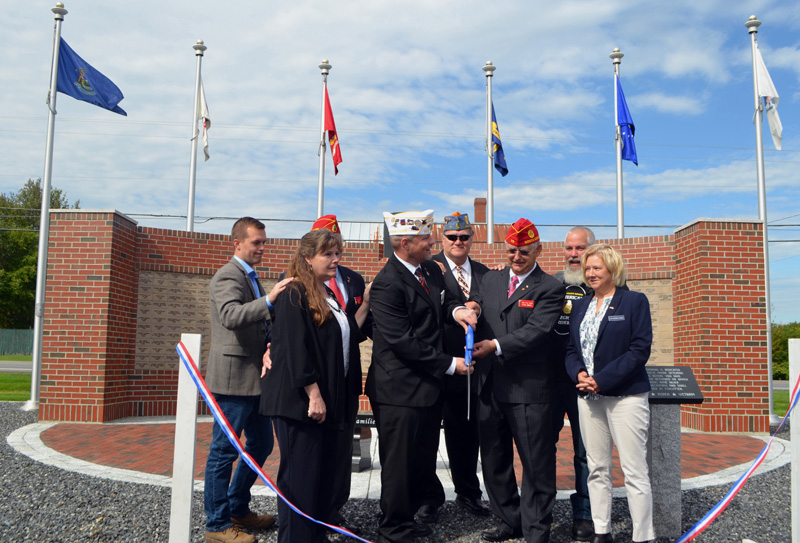 One of the most emotional times during the ceremony was when Golden read the six articles in the code of conduct signed by members of all branches of the U.S. military.

“Article I: I am an American, fighting in the forces that guard my country and our way of life. I am prepared to give my life in their defense.

“Article III: If I am captured, I will continue to resist by all means available. I will make every effort to escape and aid others to escape. I will accept neither parole nor special favors from the enemy.

“Article IV: If I become a prisoner of war, I will keep faith with my fellow prisoners. I will give no information nor take part in any action which might be harmful to my comrades. If I am senior, I will take command. If not, I will obey the lawful orders of those appointed over me and will back them up in every way.

“Article V: Should I become a prisoner of war, I am required to give name, rank, service number, and date of birth. I will evade answering further questions to the utmost of my ability. I will make no oral or written statements disloyal to my country and its allies.

“Article VI: I will never forget that I am an American fighting for freedom, responsible for my actions, and dedicated to the principles which made my country free. I will trust in my God and in the United States of America.”

In closing, Golden said, “Our goal is to someday have a star on each one of these veterans’ names that are on this memorial to indicate they have come home to a hero’s welcome they so much deserve.”

The memorial bears six names of veterans from Lincoln County, all of whom served in World War II. 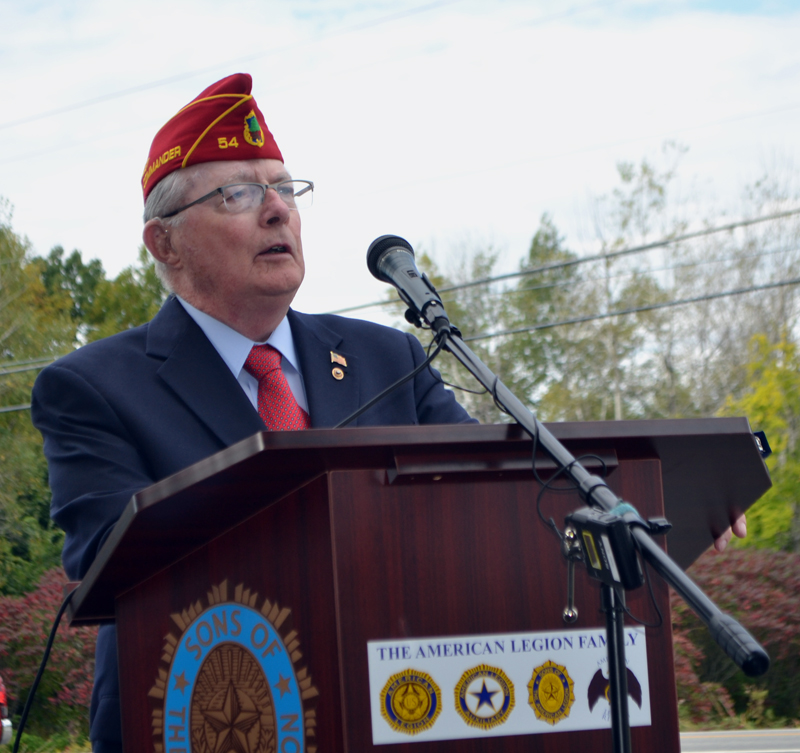 Past American Legion National Cmdr. Anthony “Tony” Jordan delivers a welcome during the dedication of the new POW/MIA memorial at Legion state headquarters in Winslow on Saturday. Sept. 28. Jordan is a member of Bradford-Sortwell-Wright Post No. 54 in Wiscasset. (Charlotte Boynton photo)

The following information about those veterans is from the website honorstates.org and other sources, such as newspaper articles and obituaries.

U.S. Army Air Forces Sgt. Adelbert E. Barter, of Lincoln County, served in the 24th Pursuit Group, 20th Pursuit Squadron. He was reported dead while on a Japanese ship transporting American prisoners on what became known as a “voyage to hell.”

On Oct. 24, 1944, the ship Arisan Maru was carrying approximately 1,781 American prisoners of war and 100 civilians in its cargo holds. The USS Shark, unaware that American prisoners were on board, fired three torpedoes that hit the ship, breaking it in two pieces. The entire crew, all but nine of the prisoners, and all the civilians died.

A cenotaph at the Dresden Mills Cemetery honors Barter.

Sgt. Malcolm W. Carter, of Boothbay Harbor, was a gunner with the 7th Bomber Group, Heavy, 9th Bomber Squadron, of the U.S. Army Air Forces. He was declared dead Dec. 1, 1943.

In May 1946, Carter’s remains were among those of 40 Americans exhumed from sites across Asia to take off on a C-47 plane on a routine flight from Burma to India.

The plane crashed in severe weather conditions. The three crew members and eight passengers, including seven American Grave Registration Service personnel, were lost, along with the 12 wooden crates holding the remains of the 40 missing service members.

The crash site has been located and many families of the men still hope to see their return. 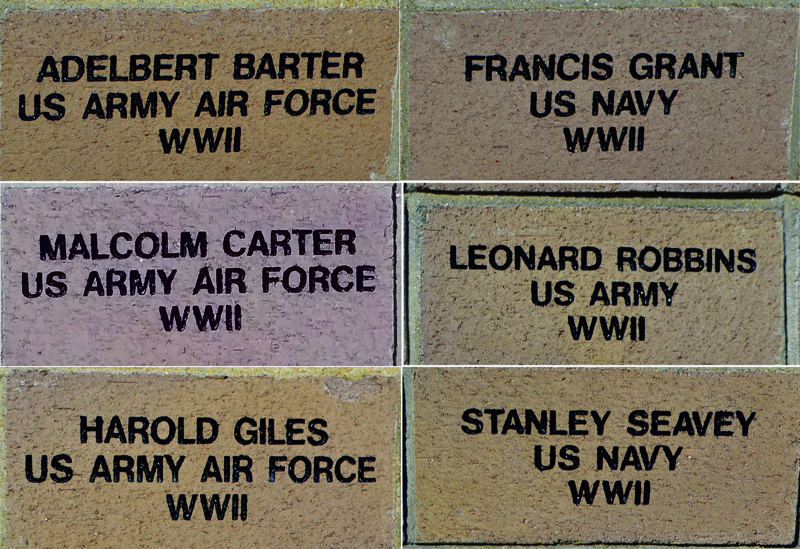 After basic training, Giles became a nose gunner and was assigned to the 392nd Bomber Group, Heavy, 579th Bomber Squadron. On Oct. 4, 1943, during the fifth mission of his unit, they were to deconcentrate the German defenses. Thirty-two aircraft were dispatched for the mission. The unit encountered enemy aircraft and three aircraft were lost. Giles was one of 31 crewmen to become missing in action when the aircraft he was in fell into the sea. He was awarded the Air Medal and a Purple Heart.

U.S. Navy Petty Officer 2nd Class Francis W. Grant, of Wiscasset, died on the USS Turner on Jan. 3, 1944. He was the son of Frank and Bridget M. Grant, a 1941 graduate of Wiscasset Academy.

He joined the Navy in October 1942. After basic training, he was assigned to the USS Turner.

The destroyer did not sink in battle; it sunk while anchored in New York Harbor the morning of Jan. 3, following a series of explosions from within the ship.

There is a memorial stone for Grant at the Woodlawn Cemetery in Wiscasset. He was the older brother of the late Shirley Grant Hill, who served in the Navy during the Korean War.

U.S. Army Pfc. Leonard Robbins, of Lincoln County, has been missing since May 31, 1942, lost in the Philippines. Robbins served in the 31st Infantry Regiment. He enlisted in the Army on Nov. 22, 1939, prior to the war.

Robbins was one of the few members of the 31st Infantry who did not surrender to the Japanese with Maj. Gen. Edward King on April 9, 1942. According to biographical information from Russell W. Pickett, Robbins continued fighting the Japanese and was killed in action. He was awarded the Bronze Star and Purple Heart.

U.S. Navy Seaman 1st Class Stanley M. Seavey, of Boothbay Harbor, has been missing since April 24, 1945. He was serving on the destroyer escort USS Frederick C. Davis. He was the son of Milton and Ella Seavey.

The Davis was patrolling and guarding the Atlantic coast about 570 miles east of Cape Race, Newfoundland, when it was hit by a German submarine on the port side and sank within five minutes. Seavey was one of 115 men who died. The German submarine that attacked the Davis was sunk the same day by other U.S. destroyer escorts.

“Amazing Grace” was played by Michael Loudin, pipe major of the Maine Public Safety Pipe and Drum Corps. Marcia Gallagher, a professor of music at the University of Maine at Augusta, sang the national anthem.

After the ribbon-cutting, a volunteer band played all the service songs and a wreath was laid at the foot of the memorial wall by Oxford, Jabaut, and Chaput.

The benediction was given by American Legion Auxiliary Chaplain Audrey L’Heureux.

(Correction: An earlier version of this article online and on the front page of the Oct. 3 print edition incorrectly reported the last name of the late U.S. Marine Corps Pvt. Alberic Blanchette. It is Blanchette, not Blanchard. The Lincoln County News regrets the error.)