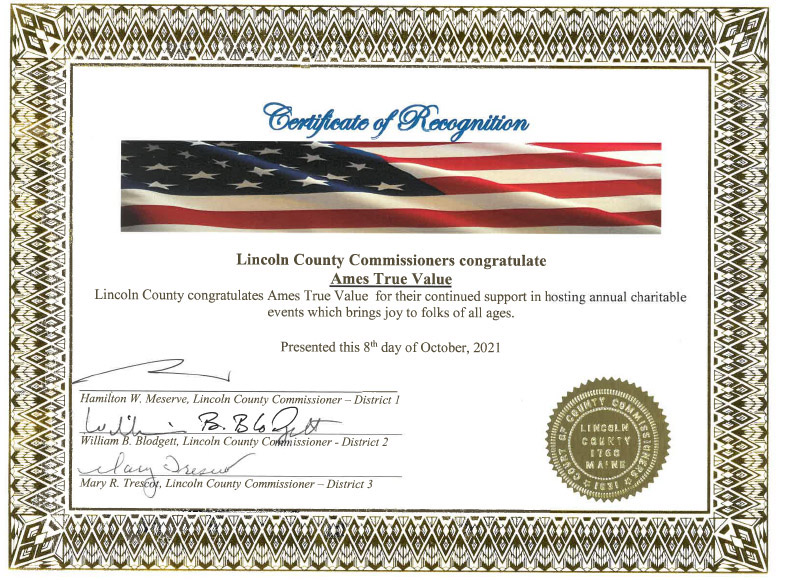 Lincoln County Commissioners will send a certificate like this to recipients of the Spirit of America Awards. (Courtesy photo)

The annual Spirit of America Awards in-person ceremony was canceled for the second year in Lincoln County, due to the COVID-19 pandemic. To honor the volunteerism of the recipients nominated by their town officials, Lincoln County Commissioners voted, at their meeting Oct. 19, to send awards and letters of congratulations to the recipients of 12 towns participating in the program this year.

The awardees include: John Hargreaves, Ed Harmon, and Arthur Richardson, from the town of Boothbay, who established a Veterans’ Emergency Temporary Shelter to aid homeless veterans. The group converted a cargo trailer into a temporary shelter. It was insulated with heat, lights, microwave, refrigerator, and a commode.

The town of Bremen’s award recipient is the broadband committee appointed by selectmen in September 2019 with the goal of bringing high speed internet access to every home in the town.

The committee worked with Tidewater Telecom to obtain a ConnectME grant of $120,000. Due to the efforts of the committee, every home in Bremen now has access to high speed broadband service.

The town of Bristol Spirit of America Award is awarded to Phil and the late Candy Congdon. Candy passed away in February 2021, and was the Bristol correspondent for The Lincoln County News. She and her husband Phil were the chair people of the Bristol Broadband Committee in promoting the rollout of 100% broadband coverage in the town.

The town of Damariscotta honored Jane Oliver-Gravel who through her Main Street Grocery led a number of activities to help the Damariscotta community during the pandemic.

The town of Dresden awarded Allan Moeller, Sr. for his decades of service to the town, by serving as the town selectmen and road commissioner over the years. He is known as giving people the opportunity to speak, and treating their opinions with respect.

Jefferson recognized the outstanding volunteer work and generosity of Marie and Jim Lindsey during the pandemic. The Jefferson Village Community Center was unable to raise funds to purchase a building; the Lindseys donated space of the LeBarn, an event center for social events such as weddings, and other special events.

During the pandemic the facility was used for 14 weeks of a healthy meal program, an Easter egg hunt, a book signing to heal a veteran, community yard sale, a food truck and more. In addition to providing the space for these activities, Marie Lindsey also helped cook the meals, and raised funds for Christmas gifts.

The town of Newcastle recipient is Brian Footer for his many years of volunteer service to the town.

According to his nomination from town officials, Footer was not born in Newcastle, “but he had the good sense to move here in the 1980s.” He was an active member of the Newcastle Fire Department for many years, and served as a town selectmen for 11 years.

The Somerville Volunteer Fire Department is the recipient of a Spirit of America Award. In addition to responding to emergencies no matter the size of the call, the conditions of the roads, or location, they give extra support to those in need. During the pandemic, they helped with pop-up food pantries, check-ins on locals, and distributing PPE to town people.

The town of South Bristol’s recipients are Cecil Burnham and Ellen Shew. Burnham has been the town’s harbormaster since 2004. He balanced the commercial and recreational users of the water surrounding South Bristol, assisted by assistant harbormasters over the years.

Burnham also interacted with state and federal officials on various issues, including replacement of the bridge, and addressing requests from the aquaculture industry on interaction with the U.S. Coast Guard.

Shew has been a behind-the-scene supporter of the work by the harbormaster, by sending out mooring permit applications and updating the list of moorings for the town. She also serves as a member of the Thompson Ice House Committee; she became the Rutherford Library head librarian in the early 1980s and still holds the position.

Westport Island’s Spirit of America awardees are the Westport Island History Committee and the Westport Island Wright House and Ferry Landing Committee. The award is given to the history committee for its dedication to advising the town selectmen on the pursuit, preservation and promotion of the island’s proud history and rich cultural heritage.

The award is given to the Westport Island Wright House and Ferry Landing Committee who transformed the former Ferry Landing and Wright Property into a community landmark.

The town of Whitefield honored the Whitefield Library volunteers. A letter from a second grader signed “your Citizen Quinn” to the town selectmen in 2017, asking on behalf of the children in town to open the Library during the summer, because, according to the letter, there is nothing to do during the summer in town.

The letter prompted the number of volunteers to the library to over 100, and now has created a year-round library.

Ames True Value was awarded Wiscasset’s Spirit of America Award for hosting many events at the business, and helping charitable organizations.