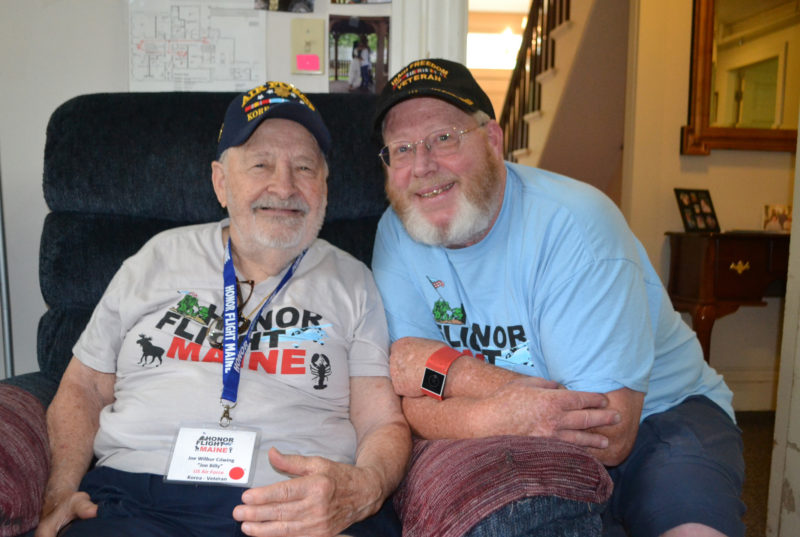 A local father and son with 62 years of service to the U.S. military between them visited veterans memorials in Washington, D.C. with Honor Flight Maine last month.

Retired U.S. Air Force Maj. Joe Wilbur Cowing, of Wiscasset, was one of more than 90 veterans along on the flight. His son, Iraq War veteran Joe Woodward Cowing, of Dresden, accompanied his father to assist him during the June 24-26 trip.

An affiliate of the national Honor Flight Network, the nonprofit Honor Flight Maine flies veterans to D.C. to visit memorials. The organization exists “solely to honor America’s veterans for all their service and sacrifices,” according to honorflightmaine.org.

Maj. Cowing was in the Air Force for four years and the Air Force Reserve for 32 years, including several more stints of active duty.

During a recent interview, Cowing said neither he nor his son would have been able to see the veterans memorials if not for Honor Flight Maine.

Cowing was in the military from 1951-1987. He served as a radar operator in Okinawa, Japan during the Korean War. After his tour of duty in Japan, he returned to the U.S.

His unit was sent to a base in Dallas Center, Iowa, which had a population of about 550 people at the time. According to Cowing, there was not much going on for a group of Air Force men returning to the states.

He said the guys heard about a dance at the local Veterans of Foreign Wars post and invited him to come along. He was not much of a dancer, but he went anyway.

While he was at the dance, just standing around, he saw a pretty young lady with reddish-blonde hair. Her name was Donna Mae. He said to himself, “I’m going over there and ask her to dance.” They courted for over four years before getting married.

Cowing credits the military for two important things in his life. First, he got to meet his wife, the love of his life, in Iowa, and second, the military helped him to find himself and make up his mind about what he wanted to do with his life.

Cowing, while in the reserves, went first to Michigan State University for his teaching certificate, then to Wayne University to become a social worker.

The Air Force used the skills he gained while in the reserves and commissioned him as an intelligence officer. His duties included teaching survival skills to recruits and counseling veterans and their families through difficult times.

“That was my calling,” Cowing said. “Helping people and teaching.”

He and Donna Mae were married in 1957. Both became educators and together they became the parents of four sons. All four sons have served in the military, something Cowing is proud of. At the time of Donna Mae’s passing in 2017, the couple had been married 59 years.

Cowing, 85, is writing an autobiography. He has selected a title: “The Journey of a Dinosaur.”

His grandchildren call him a dinosaur because he doesn’t use email or other means of electronic communication. He likes to handwrite letters, read the print edition of the newspaper, and read paper books. His favorite book is the Bible, which he said he has tried to live by all his life.

Cowing described the Honor Flight as the “trip of a lifetime.”

“The Honor Flight was carried out like a military mission, executed brilliantly, with precision, every move planned to ensure the safety of the veterans,” he said. “Our flight was accident-free and we had a wonderful three-day free flight.”