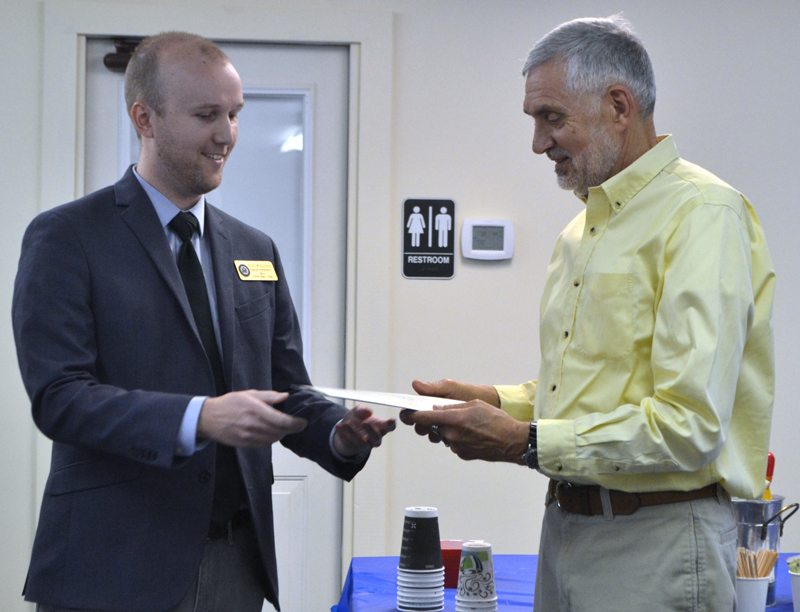 The Lincoln County Regional Planning Commission hosted the party. Faunce has served as county planner since 1998.

Last July, Faunce said he would retire in March of this year. According to Lincoln County Regional Planning Commission Executive Director Mary Ellen Barnes, he essentially did so at the end of April, but continues to help with a few matters.

Faunce, a resident of Hebron in Oxford County, has dedicated his career to land use planning, coastal resiliency planning, environmental permitting, and resource economics.

For the past 20-plus years he has provided planning services for the 18  towns in Lincoln County, in recent years as a consultant to the Lincoln County Regional Planning Commission.

Over the years he has worked as a planning consultant for many Maine communities and state agencies. With grant funding, he has investigated the impacts of a changing climate on Lincoln County’s coastal communities.

At the retirement party, it was apparent that Faunce’s work in Lincoln County and throughout Maine has not gone unnoticed.

Dick McLean, chair of the Lincoln County Regional Planning Commission Board of Directors, opened the retirement ceremony by telling guests Faunce was the best planner in the state, to loud applause.

“For 20 years your work has stood as a shining example of public service and you have undoubtedly earned the respect of your colleagues and community alike,” King said in a message to Faunce. “Your tireless efforts have resolved problems for countless people throughout the years and I am confident that your experience and knowledge will serve as inspiration to those who follow in your footsteps. Thank you for your tremendous service to Lincoln County and the great state of Maine.”

State Sen. Dana Dow, of Waldoboro, presented Faunce with a sentiment from the Legislature.

Faunce “has been a tireless advocate for Lincoln County and an integral part of addressing the county’s natural resources, environment, community growth, and economic development,” the sentiment reads. “We extend our congratulations and best wishes.”

Dow described Faunce as a man with “common sense” who is always moving forward with a positive attitude. Dow said he had known Faunce since 1990, when Dow was a member of the Waldoboro Planning Board.

Lincoln County Commissioner Hamilton Meserve said to Faunce, “I don’t know how we will ever replace you.” 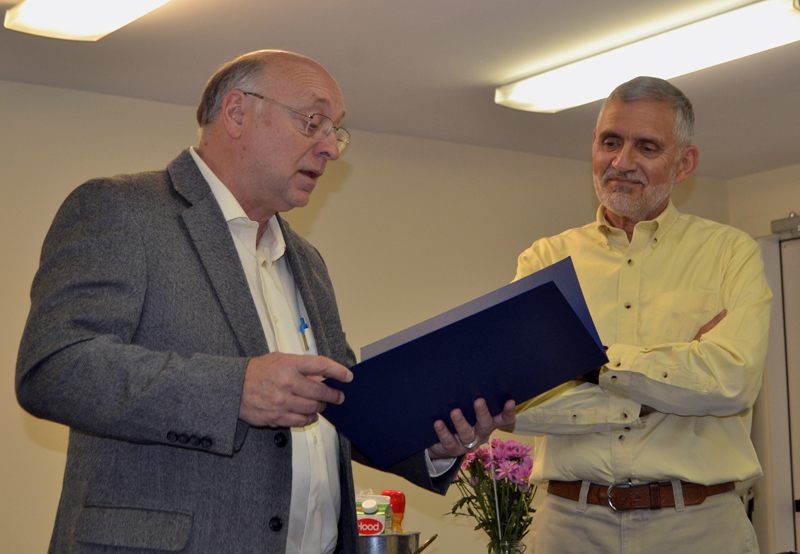 Kathleen Leyden, director of the Maine Coastal Program at the Maine Department of Marine Resources, said Faunce’s leadership in his field has provided a model for others to follow.

Barnes, director of the regional planning commission, presented Faunce with a selection of gifts from towns in Lincoln County.

Although Faunce is retiring as county planner, he is not retiring from planning or from his interest in the environment.

“I am providing some planning assistance to a couple of towns in the county and I am hoping to be asked to participate in the state-level climate adaptation planning that Gov. Janet Mills has proposed,” Faunce said of his future plans.

On a personal level, he and his wife are planning a trip to South America. They have traveled quite a bit already, around the country and to Europe. His favorite destinations are closer to home: northern Aroostook County, where they go on a camping trip each year, and the Bangor Folk Festival, which they attend faithfully.

Faunce accepted all the recognition with smiles and quiet thanks. In his remarks, he acknowledged the outstanding work by Barnes, whom he has worked with for many years.

“She is a force to be reckoned with,” he said. “And we have never even had a disagreement,” he added with a chuckle.

He has provided planning and administrative services for the Maine Department of Transportation, prepared bicycle-pedestrian plans for Cape Elizabeth and towns in Lincoln County, and worked with the Maine State Planning Office to conduct a series of land use training seminars for code enforcement officers.

In 1971 he joined the U.S. Navy, attaining the position of medical laboratory director. After completing his military service in 1975, he accepted a position as medical technologist at the Kennebec Valley Medical Center in Augusta while pursuing studies in resource economics and land use planning.