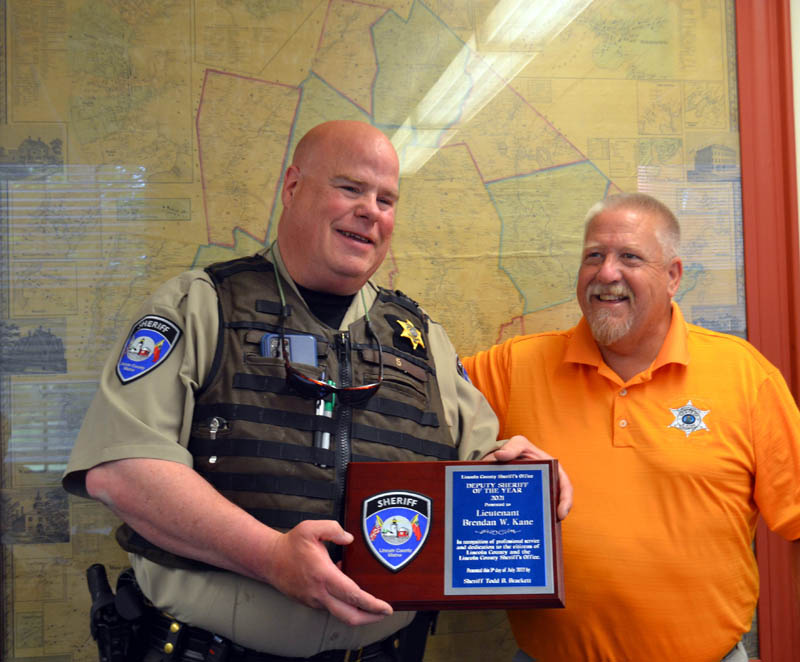 Sheriff Todd Brackett (right) presents Lt. Brenden Kane, of the Lincoln County Sheriff’s Office, with the 2021 Deputy of the Year award during a brief ceremony at the Lincoln County Board of Commissioners meeting on Tuesday, July 5. (Charlotte Boynton photo)

Lincoln County Sheriff Todd Brackett announced the selection of Lt. Brendan Kane as 2021 Deputy of the Year at the Lincoln County Board of Commissioners meeting on Tuesday, July 5.

In his presentation to the commissioners, Brackett said Kane managed the Patrol Division during some very difficult times, like during the COVID-19 pandemic when deputies were out sick and when the sheriff’s office was down 10 people last year.

“He worked a lot of hours, managing the division and being a patrol officer at the same time,” Brackett said.

Kane has spent his entire law enforcement career working within the Patrol Division of the Lincoln County Sheriff’s Office. He began working full time in 1992 and was promoted to sergeant in 2002 before becoming the patrol lieutenant in 2017. Kane is also the office’s lead firearms instructor as well as a frequent instructor at the Maine Criminal Justice Academy.

He currently serves on the board of directors of Healthy Kids, a nonprofit organization located in Damariscotta that works to improve the lives of children by providing programs designed to help parents, caregivers, and professionals in raising healthy children.

Kane’s two adult children, Griffin and Riley, were at the meeting for the presentation to their father.

In other department business, Brackett received the commissioners’ approval to offer conditional employment to Jordan Jandreau, a five-year veteran of the Rockland Police Department. Brackett told the commissioners he is only down one position, and he believes this is due to the hiring incentive the county now offers to new hires.

The population at Two Bridges Regional Jail as of July 5 was 123 inmates, 16 women and 96 men, from the following jurisdictions: Penobscot County, 58; Lincoln and Sagadahoc counties, 27 each; Knox County, seven; and Cumberland,  Androscoggin, and York counties and federal government, one each.

County Administrator Carrie Kipfer informed the commissioners the county had received information from the Maine Department of Transportation of taking of property on Atlantic Avenue in Boothbay Harbor, near Lobster Cove, and the States Claims Commission has scheduled a meeting on Wednesday, July 27.

The county also received a letter from the DOT regarding a public meeting to discuss the rehabilitation of Southport Bridge. The meeting, which will consist of videos and information about the project, can be viewed at mainedot.gov/vpi.

The commissioners authorized the payment of the sewer district grants of $200,000 from the America Rescue Plan Act funds to the Waldoboro sewer district and Wiscasset’s wastewater treatment plant. The board also approved microfilm digital conversion of 60,000 images of Lincoln County historic documents form 1938-1950 for a cost of $11,497.47.