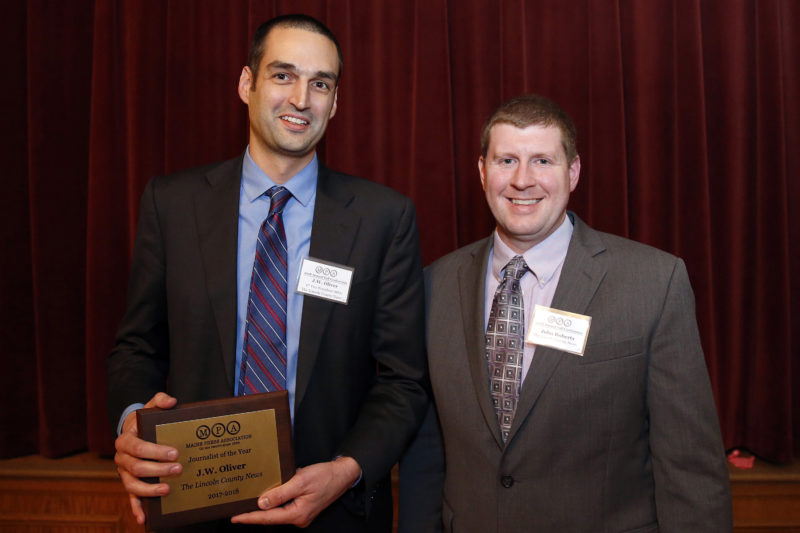 The editor of The Lincoln County News, J.W. Oliver, has been named the Maine Press Association’s 2017-2018 Journalist of the Year.

Oliver is the first LCN journalist to earn the distinction and the first from any weekly newspaper since A.M. Sheehan and Matt Hongoltz-Hetling, of the Advertiser Democrat, shared the honor in 2012.

The Maine Press Association Board of Directors selects the Journalist of the Year from nominations by its members, daily and weekly newspapers and online-only publications across the state.

The title honors “an exceptional news employee whose work has been truly distinguished over the previous year or a period of years,” according to the nomination guidelines.

Oliver’s selection involved an elaborate ruse by the newspaper’s ownership and the association’s board. Oliver sits on the board and normally votes on the recipient.

In order to nominate Oliver without his knowledge, LCN Associate Publisher John Roberts contacted Maine Press Association Executive Director Diane Norton for assistance. The board, minus Oliver, voted on the nominees and selected Oliver. Afterward, Oliver participated in a staged vote in which the board selected a different recipient.

Oliver did not know any of this until Roberts stood up to introduce him during the ceremony.

“There is no one article, editorial, or photograph that makes J.W. the ideal nominee for this award. Rather, it’s a series of events spanning his tenure at the newspaper that necessitated his nomination,” Roberts said.

Roberts spoke about Oliver’s fulfillment of his many duties as editor, as well as his leadership inside the newsroom.

“One of the truest testaments of J.W.’s leadership is the growth and development of the editorial staff,” Roberts said. “We are proud that two Lincoln County News reporters have received the Bob Drake Young Writer’s Award, in 2016 and 2017, during his tenure as editor.”

Those awards “would not have been possible (without) J.W.’s mentorship and encouragement in their development as journalists,” Roberts said.

“Enough cannot be said about the dedication and commitment J.W. has for our newspaper, nor do words capture how much his presence, work, and effort are appreciated by the staff and our family,” Roberts said. “There are many skeptics out there on the future of news, professional journalism, and newspapers. I am confident and optimistic our collective future is bright and promising with journalists like J.W. at the helm.”

“J.W. brings the qualities of a great journalist – honesty, curiosity, fairness, balance, and a love of the industry – to his work with the MPA and we as a board are better for it,” Holmes said.

Oliver, 34, joined the staff of The Lincoln County News in May 2010 as a general assignment reporter. He was promoted to deputy editor in May 2014 and editor in February 2016.

“I am grateful to the Roberts family and my fellow Maine Press Association board members for this great and unexpected honor,” Oliver said.

“Maine newspapers have a wealth of journalistic talent, including the past and future recipients of this award,” he said. “To become a member of this group, with some of the journalists I most admire, will only make me work harder as a representative of both the LCN and Maine journalism.”

“I think this honor, as much as it recognizes my work, recognizes the importance of weeklies and their work to inform their readers about goings-on in their communities, particularly in local government,” Oliver said. “We cover news no one else covers and no one will cover if we go away.”

As editor, Oliver manages the news staff. He assigns and edits staff work, edits the editorial page, and writes the editorials. He remains active as a reporter, particularly with courts coverage.

He lives in Bristol with his wife, Rachael, and their 3-year-old son, Harrison. The family expects to welcome a baby girl in December.