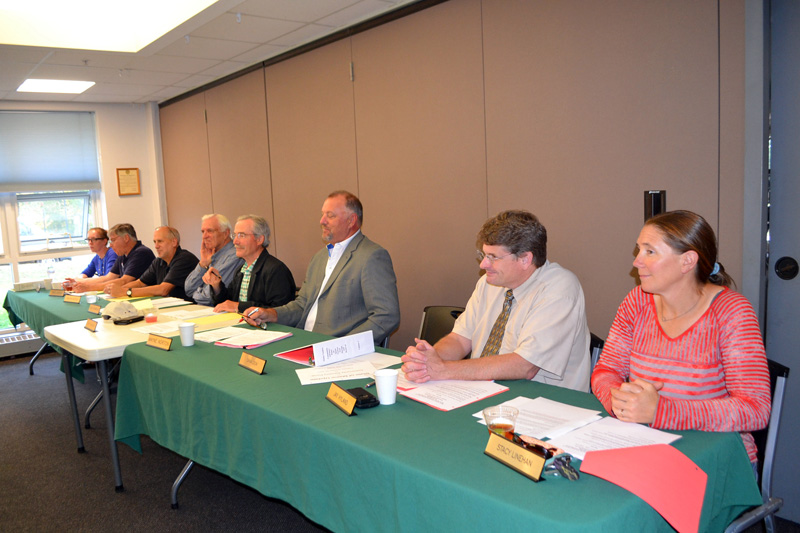 The Maine Yankee Community Advisory Panel on Spent Nuclear Fuel Storage and Removal received updates on the Independent Spent Fuel Storage Installation in Wiscasset and the prospects for removal, as well as a state inspector’s update, during its annual meeting at the Wiscasset Community Center on Tuesday, Oct. 10.

Maine Yankee Atomic Power Co. operated a nuclear power plant in Wiscasset from 1972-1997. The CAP exists to enhance education, open communication, and public involvement regarding the storage installation and to advocate for the removal of the waste there.

The Independent Spent Fuel Storage Installation is an 11-acre open-air facility with an adjacent security and operations building, according to the Maine Yankee Atomic Power Co. website. The facility contains 60 airtight steel canisters of spent nuclear fuel and four of “Greater than Class C” waste, or irradiated steel removed from the plant’s reactor vessel.

The CAP’s first order of business was to approve former state Sen. Chris Johnson, of Somerville, as a public representative to the panel.

Independent Spent Fuel Storage Installation Manager J. Stanley Brown said a 20-year license on the dry cask storage canisters will expire in 2020. Efforts are ongoing with the Electric Power and Research Institute to address issues such as potential corrosion of dry storage components and long-term weathering of concrete structures.

According to Brown, the Electric Power and Research Institute has created a subcommittee to handle repairs in the event of issues with the canisters.

Maine Yankee has been selected as a host site to test corrosion coupons to evaluate the effects of typical dry storage environments on canister materials. The Colorado School of Mines, with funding from the U.S. Department of Energy, will conduct the testing. The coupons have been installed on four casks at Maine Yankee. Brown said the school will leave them there for at least a year. Corrosion coupons measure corrosivity to provide information about the life expectancy of materials, according to a manufacturer’s website.

The Maine Department of Environmental Protection oversees groundwater monitoring at Maine Yankee and takes samples three times every fifth year on 21 wells. In August, the DEP and Maine Yankee agreed to abandon 14 of those wells. The next sampling of the seven remaining wells will begin in 2018.

August marked a safety milestone of 500,000 safe hours or 12 years without a loss-of-time accident. The last such accident occurred in late 2005.

In April of this year, Maine Yankee had three events involving the Independent Spent Fuel Storage Installation security systems. One of the issues involved an equipment failure and the other two involved human performance.

According to Brown, an evaluation of the causes has been completed and good progress has been made to  prevent the incidents from reoccurring. Brown did not indicate that there was any danger to the environment or to the public as a result of the incidents.

Dostie said he has performed quarterly field replacements of thermoluminescence dosimeters around the Independent Spent Fuel Storage Installation and Bailey Cove. The dosimeters measure background exposures to estimate the detection limits for radiation. He expects to report on their findings in the first half of 2018.

Maine Yankee Atomic Power Co. Director of Public and Government Affairs Eric Howes gave the CAP some encouraging news, reporting that bills on nuclear waste are expected to be introduced in Congress.

The leaders of the U.S. Senate Appropriations Committee’s Energy and Water Development Subcommittee are expected to reintroduce a bipartisan, comprehensive nuclear waste reform bill aimed at implementing several of the recommendations of the Blue Ribbon Commission on America’s Nuclear Future, including the establishment of a pilot consolidated interim storage facility for decommissioned nuclear plants.

Another issue is a proposed amendment to the Nuclear Waste Policy Act to move the licensing process forward for the Yucca Mountain repository, a remote site long studied as a potential permanent geologic repository for high-level radioactive byproducts.

According to Howes, the amendment would authorize the energy secretary to begin developing a single interim storage facility. The bill would not allow the transportation of fuel to the interim storage facility until there is a final U.S. Nuclear Regulatory Commission decision on the Yucca Mountain construction. The U.S. House of Representatives Energy and Commerce Committee passed the bill 49-4 on June 28. A vote of the House is expected soon.

License applications have been submitted to the Nuclear Regulatory Commission for consolidated interim storage facilities in New Mexico and Texas.

The decommissioned nuclear power plants continue to litigate with the federal government regarding its failure to provide a location for the storage of spent fuel. In spring 2016, Maine Yankee was awarded approximately $23.6 million for the years 2009-2012.

A Phase IV case was filed in May 2017 in the U.S. Court of Federal Claims. Maine Yankee is asking for damages for the 2013-2016 years in the amount of approximately $35 million, according to Howes.