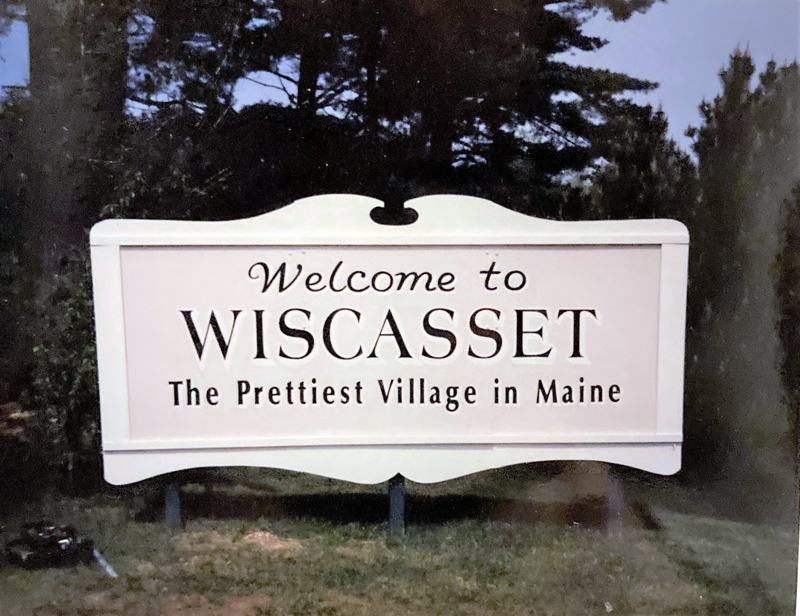 One of Schuyler Fairfield’s signs is located on outside the village on Route 1, where it welcomes people to Wiscasset. (Photo courtesy Fairfield family)

On Saturday, Nov. 26, the family and friends of the late Schuyler Leroy Fairfield gathered to celebrate his life at the First Congregational Church of Wiscasset.

Fairfield, a longtime Wiscasset artist, businessman, and a prominent member of the Wiscasset community, passed away Nov. 19 at the age of 92. Fairfield owned and operated Fairfield of Wiscasset Signs for more than 55 years, producing thousands of custom-made signs for boats, businesses, and community groups.

Many Fairfield signs remain in use today, one of the most prominent being the “Welcome to Wiscasset: The Prettiest Village in Maine” sign, seen by thousands of motorists on Route 1 each year.

Fairfield was born in Skowhegan, Sept. 10, 1930 and moved to Wiscasset with his parents, George Washington Fairfield Sr. and Daisy House Fairfield, brothers, Bob and Richard, and sister, Madeline, in 1941. Little did he know, he would become one of Wiscasset’s most well-known citizens whose contributions to the town remain for future generations to enjoy.

Fairfield served his community in many ways over the years he lived in Wiscasset. After graduating from Wiscasset Academy in 1949, he attended Wagner School of Art in Boston, Mass. He worked as a dishwasher in a restaurant to help support himself while attending college.

On March 14, 1960 he married the love of his life, Marguerite Bailey, from Dresden. The couple had five children: Donald, Elizabeth, Marita, Cindy, and Schuyler Jr. Marguerite Fairfield passed away Nov. 8, 2013, a loss Schuyler Fairfield felt until his last days, speaking of her often when family would visit him.

During the celebration of his life at the church Schuyler Fairfield attended as a boy, each of Fairfield’s five children and a granddaughter spoke of Fairfield’s hard work and the guidance he provided. 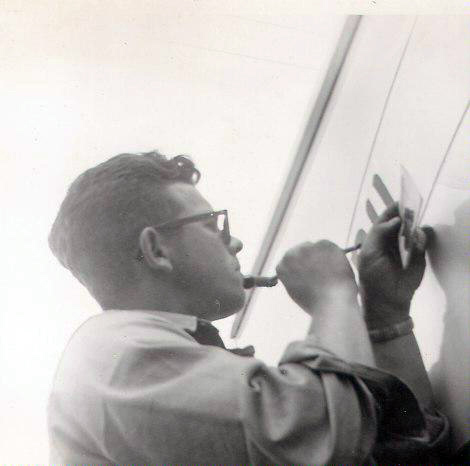 A younger Schuyler Fairfield Sr., doing what he became known for, painting a sign, on a building, free hand. (Photo courtesy Fairfield family)

Donald Fairfield thanked his father for the life he and his mother had given him; for showing the family the importance of a good work ethic, not being afraid of hard work; for always being there when he was needed, and for setting an example for his children to follow.

Elizabeth Fairfield Brown spoke of her father’s work ethic. She said he told her it didn’t matter how long it took to do the job, the important thing is to get the job done right. Displaying a wooden paint stirrer during her comments, Elizabeth Fairfield said the first thing she learned to do, working with her father in his shop, was stir paint.

“Easy as one would like, but my dad wanted it done right and it didn’t matter how long it took,” she said.

“Whenever I smell paint thinner or see paintbrushes and paint rollers I think of my dad,” she said. “He lived so much of his life around color and artistic perspective, and truly loved his art. I will always remember all the hours I spent working with him”

“Dad didn’t give us this good life by greasing the wheels for any of us,” Marita Fairfield said. “I don’t remember him doing things for us, making it easier for us, or buying lots of things. With Mom at his side he gave us something priceless that I know each of us strive to impart to our children: the values of a strong work ethic, integrity, honesty, creativity and independence.”

Schuyler’s youngest daughter, Cynthia Seigars, talked about how blessed and grateful she felt to have Schuyler Fairfield Sr. as her father.

“My mom always said, ‘if your father has some advice for you, you had better listen to him. He isn’t a man to have a lot to say, so when he speaks it is important,’” Cynthia Seigars said. 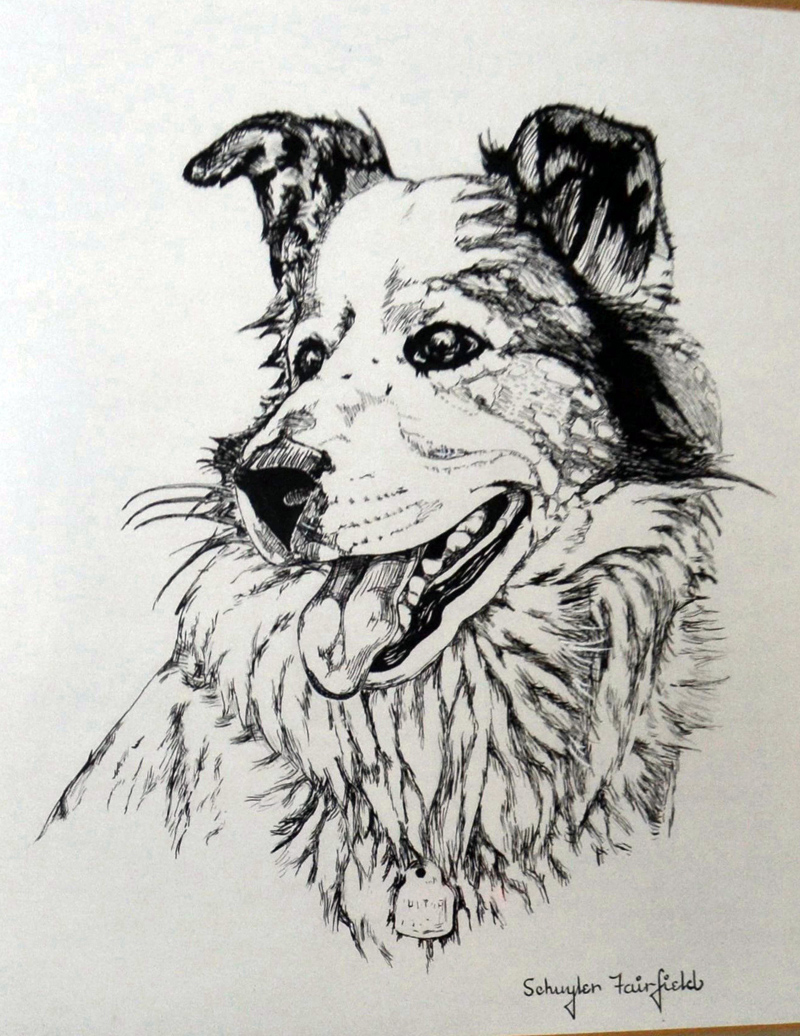 A talented artist, Schuyler Fairfield produced this charcoal drawing of the family dog before he graduated from high school. (Photo courtesy Fairfield family)

Schuyler Fairfield Jr. spoke of his father taking him fishing and always catching all the fish.

“He had some kind of a system going for him,” he said.

Fairfield’s granddaughter, Marguerite, the daughter of Marita, said her grandfather taught her about art and painting and showed her different techniques he used in his work. Sometimes her grandfather would ask her to copy one of his landscapes, giving her pointers along the way. After the painting was completed, Schuyler Fairfield would critique her work.

“He was actually very hard on me, but this wasn’t to hurt my feelings or discourage me in the slightest,” Marguerita Fairfield said. “He wanted me to succeed.”

Marguerita said she did not realize until she was older the art lessons were not just about art. He was teaching the aspects of life. She recalled the last time she showed her grandfather one of her paintings when she was 15 or 16 years old. Schuyler Fairfield looked at it thoughtfully for a moment and said, “It needs more light.”

“I have never stopped looking for that light because that is the way he taught me to live,” Marguerita Fairfield said. “To strive for the light and the beauty in the world and make it happen; to not just paint on a canvas; but to see my life as a canvas and myself as the brush.”

“My grandfather was a very wise man and I am forever grateful to him for teaching me to paint, but also how to live,” Marguerita Fairfield said.

Closing the service, Fairfield’s children went to the podium and asked those gathered to join them in singing their father’s favorite song, “You Are My Sunshine.”