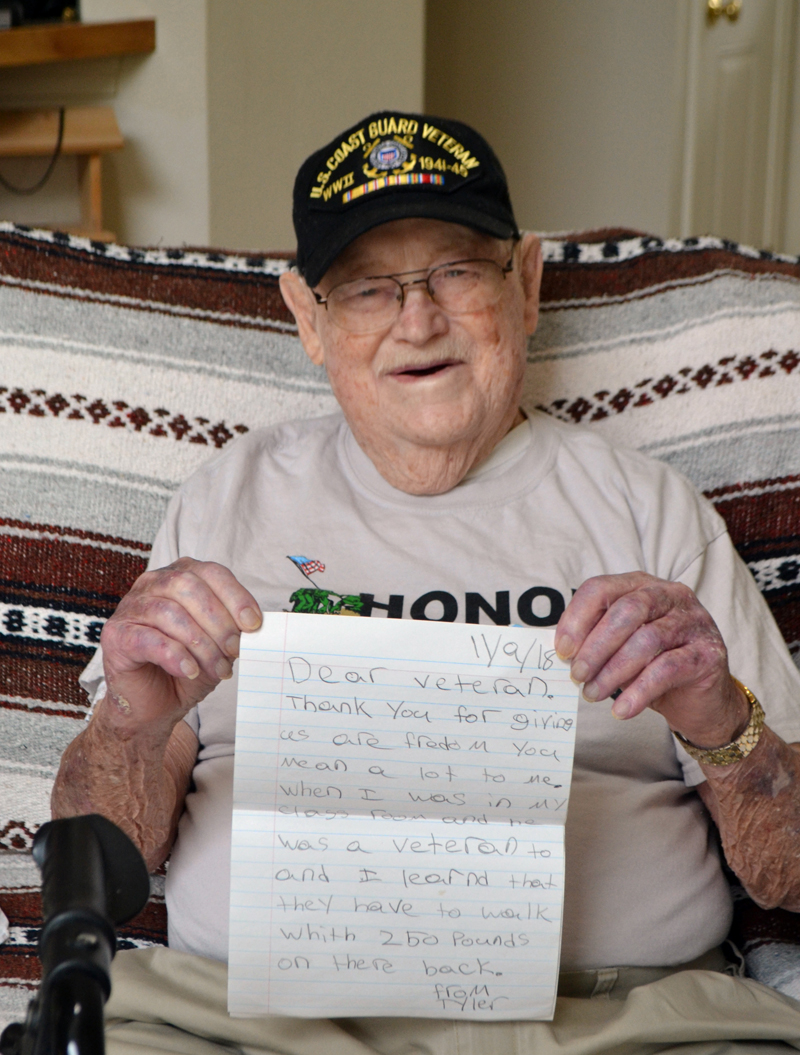 World War II veteran Eugene Walsh, 102, of Newcastle, holds a letter from a student thanking him for his service. He received the letter upon his return from an Honor Flight Maine trip to Washington, D.C. (Charlotte Boynton photo)

Walsh, a 32-year military veteran, was born Feb. 23, 1917. After returning from the nation’s capital April 28, he described the trip as “fabulous.”

Laurie Sidelinger, chair of the Honor Flight Maine board, said Walsh is the oldest veteran that has participated in the program. “It was a thrill to have him on the trip,” she said.

Back when he was on active duty, Walsh took his family to Washington, where they visited monuments and museums. But he retired in 1973, before the construction of the war memorials. The trip with Honor Flight Maine was his first to the memorials.

Walsh’s son, Dennis, traveled with him. The group of 47 veterans and their guardians left Portland the morning of Friday, April 26 and landed at Baltimore, Md., with dinner planned for them at Fort Meade.

The veterans and their guardians stayed at a Hilton hotel near the airport. “They took care of our every need,” Walsh said. “Everyone treated us wonderful.”

On Saturday morning, after a buffet breakfast, the veterans and their guardians boarded buses to begin a busy day of sightseeing: visits to veterans memorials, monuments, and Arlington National Cemetery.

Walsh said the artists and sculptors who designed and carved the memorials deserve recognition for their work to remind future generations of the service and sacrifice to preserve their freedoms.

According to Walsh, another group of people is being forgotten and also deserves a memorial: the people who built the ships, planes, tanks, vehicles, and other equipment used by U.S. servicemen and women at war.

“We must never forget the many ‘Rosie the Riveters’ during World War II,” Walsh said. “They should be remembered. Without their support, we would not have been able to do our job.” 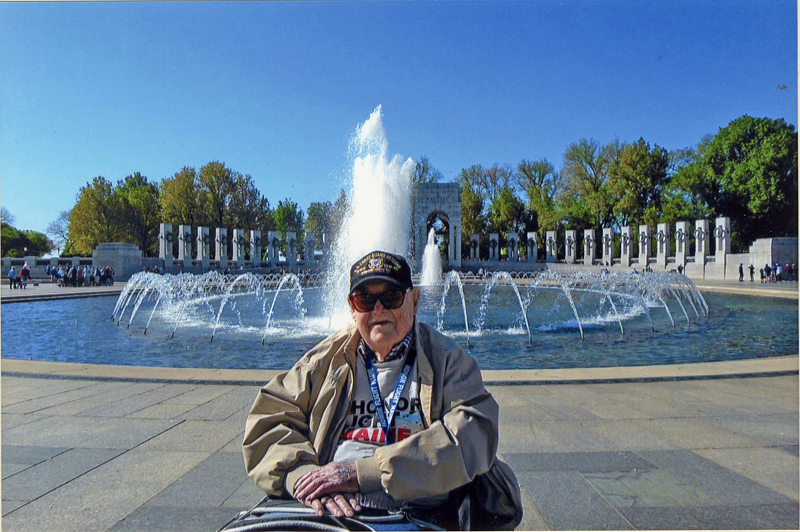 The visit to Arlington National Cemetery was the most memorable event of the trip, Walsh said, describing it as “very emotional.”

An unplanned occurrence during the trip will also be remembered by the veterans, according to Walsh.

While the veterans were visiting one of the memorials, a group of students from Michigan and Wisconsin saw them, approached them, shook their hands, and asked questions about their service.

“These students were not even born when most of the wars and conflicts occurred, yet they treated us with deep respect and a sincere interest in what we did. They visited us for over a half-hour,” Walsh said.

Walsh said he could not say enough good about the Honor Flight Maine program, a wonderful opportunity for older veterans who would never otherwise see the memorials.

An affiliate of the national Honor Flight Network, the Maine nonprofit organizes and funds the trips to honor U.S. veterans. It gives priority to World War II veterans and terminally ill veterans of all conflicts. 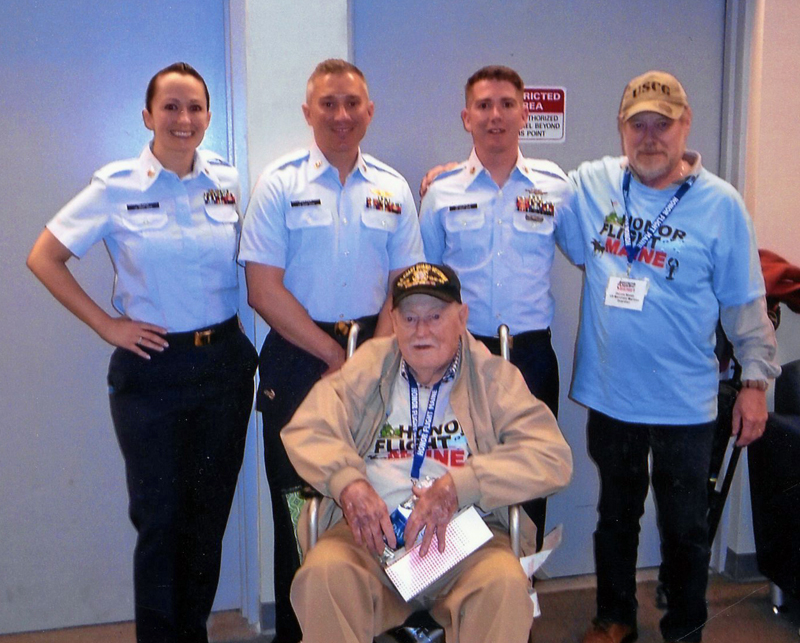 “They took care of our every need at no cost to the veteran,” Walsh said.

The pace of the two-day trip is ambitious. “Some of the veterans are old, in their 80s and 90s, and they got tired,” Walsh said.

Walsh, at 102, did not say he was tired. He was excited to see the sights and to share the trip with the other veterans.

Walsh shows no signs of slowing down. He will soon attend a reunion of the Coast Guard cutter USS Campbell, commissioned in 1936 and decommissioned in 1982. The Campbell was at sea during World War II and the Korean and Vietnam wars.

Walsh joined the Coast Guard in April 1941, before World War II began. After boot camp, he was assigned to the Campbell.

The U.S. had enacted the lend-lease program to supply vital goods to allied countries. The supplies were carried by merchant marine ships in convoys escorted by U.S. Navy and Coast Guard ships. 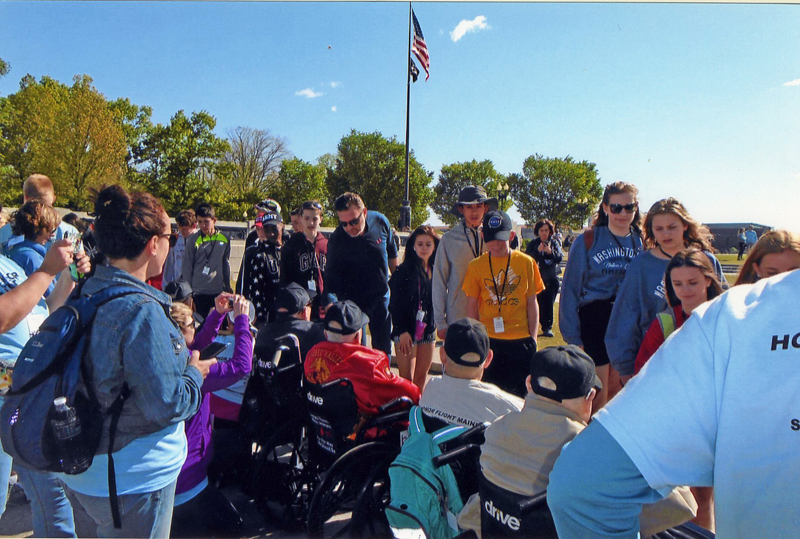 Walsh started out as a seaman and went up through the ranks to become a commander and then a captain. His first duty after becoming an officer was an assignment to the USS Bibb.

In 1972, he became the chief of staff for Coast Guard District 9, responsible for activities on the Great Lakes. He retired in 1973 and, in 2007, moved to Newcastle, into a home next door to his son, Dennis.

The town of Newcastle presented him with its Boston Post Cane in 2015, recognizing him as the oldest resident of the town.