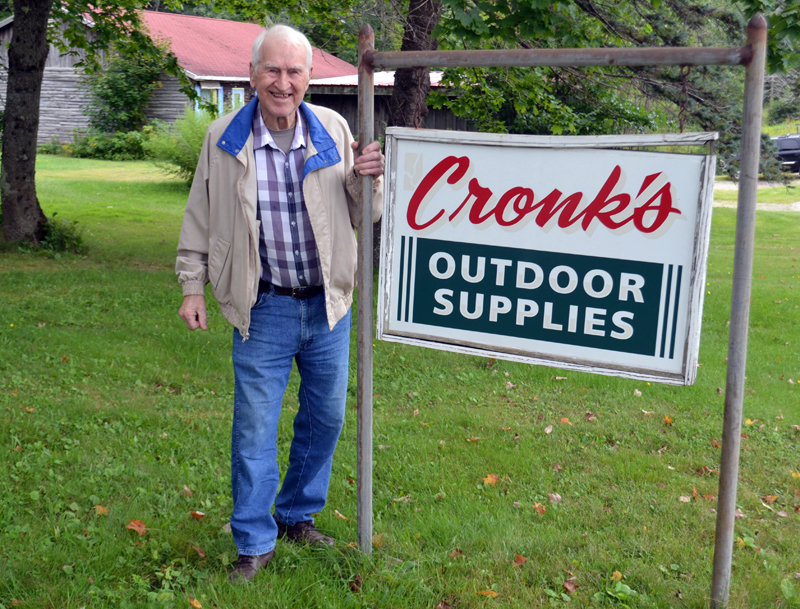 Oscar Cronk stands by his sign on the Gardner Road. “Cronk’s Outdoor Supplies” will be coming down since he recently sold the business, and announced he will retire after nearly 60 years. (Charlotte Boynton photo)

The Cronk Outdoor Supply sign, at 133 Gardner Road will soon be coming down after 60 years. Oscar Cronk, Jr. at the age of 91, announced recently he is retiring and sold his business to Pete Rickard Co. of Galetan, Pa., a supplier of hunting accessories.

Cronk is a legend in Wiscasset, and over the years he has worn several hats, many at the same time. He is the son of the late Oscar and Susie Cronk, who started their lives together in Aroostook County, later moving to Bucksport, then to Newcastle. In 1942, the Cronk family moved to Wiscasset when Oscar Jr. was 12 years old.

Among the many hats worn by Cronk was worm digger. He pointed out the town of Wiscasset was once known as the Worm Capital of the World. After serving in the U.S. Army from 1948 to 1950, he came home and began digging sand and blood worms.

Cronk became a nationally-known outdoorsman over the years, with many articles written about his accomplishments in hunting, trapping, dog training, and his development of animal scents and trapping lures.

During a recent interview, Cronk said one of the first things that sparked his interest in trapping and hunting was when he was five years old. A Native American friend of his father, Sapuel, who lived on the Old Town reservation, would stop by the house on his way to Haynesville to trap.

One day while Sapuel was visiting, Cronk said he was playing with a toy gun. Sapuel was carrying a 22 single-shot hand gun, and Sapuel said, “Let’s trade guns.”

According to Cronk, when Sapuel put the real, unloaded gun in his hand, he never forgot the excitement he felt. He began hunting with his father when he was 12.

Cronk’s success in life is not due to a college degree, or even a high school diploma. He quit high school after completing his sophomore year, at the age of 17. He said, “I thought I was smart enough I did not need to go any further.”

Apparently, from the many successes he achieved during his life, he was right.

Cronk married Edith Pickering on Sept. 3, 1950, a partnership, not only in marriage but also in business pursued for over 60 years, until her death this past February.

“I was very fortunate, I had a wife that worked right along with me. She could skin a beaver as quickly as I could, and she allowed me to pursue doing the things I enjoyed and wanted to achieve,” he said.

Shortly after they were married, they purchased a business from Walter Arnold, a well-known Maine hunter and trapper that manufactured trapping lures and scents.

The business was first opened in a small garage next to their home on the Gardiner Road in 1963; in 1971 a larger building was erected on property a few feet from their home. The new building allowed the Cronks to display hunting and trapping supplies along with many scents created by Cronk. Edith often managed the store while Oscar was hunting and trapping.

One day while Edith was manning the store, a newspaper reporter was assigned to do an article on the unusual business. When entering the building, the scent from the room was very strong, and the newspaper reporter questioned the strong obnoxious odor.

Edith said, “If it don’t smell, it is spoiled.”

The Cronks operated the store until 1980, then continued their business at their garage.

Cronk has trapped and hunted mink, beaver, bobcats, fox, mountain lions, and other animals throughout his life and is also known for being a houndsman, training bobcat hunting dogs.

In the family room of the Cronk home is a large bobcat mounted on the ceiling beams of the room. Cronk said that bobcat was killed by his dog Fly, a Bluetick hound dog.

According to Cronk, he was training Fly, getting ready for the hunt, and she had great wind. While in the woods, he saw the bobcat, as did Fly. The bobcat started to go up a tree, and Fly jumped up and grabbed her by the neck and killed her.

“I just had to have the bobcat mounted because of it being killed by my dog,” Cronk said.

What is referred to as a “dream hunt” by Cronk is a trip to Colorado when he shot a mountain lion with one shot from a 44-magnum.

“I do not regret it for one minute,” Cronk said.

Cronk’s mountain lion is displayed at L.L. Bean’s flagship store in Freeport. Cronk said that L.L.Bean has been selling his lures and scents for many years, and he thought the mount should be shared with other hunters. There was no better place for it to be displayed.

Cronk is also the author of two books he was commissioned to write: “They Called Him Wildcat,” a story of the life of V.E. Lynch, a hunter and sportsman who spent most of his life in Maine, specializing in hound dogs and bobcats.

In fact, Cronk will pass his scents and lures on to the Pete Rickard Co., so his customers will still have the opportunity to purchase them in the future. Customers can continue to call the Cronk Outdoor Supply at 882-7032, and those calls will be automatically transferred to the Rickard Company to place an order for Cronk products.

A spokesperson for the Rickard Company said during a brief telephone interview recently, the company is considering adding a website for Cronk Outdoor Supplies, in addition to its two websites that are currently available, protektor.com and peterickard.com.

At the age of 91, Cronk credits several things to his longevity: Good genes he got from his parents, healthy eating habits, never smoking, and the time he spent in the outdoors.

He is moving on to the next journey in his life.

He may even consider writing his biography.