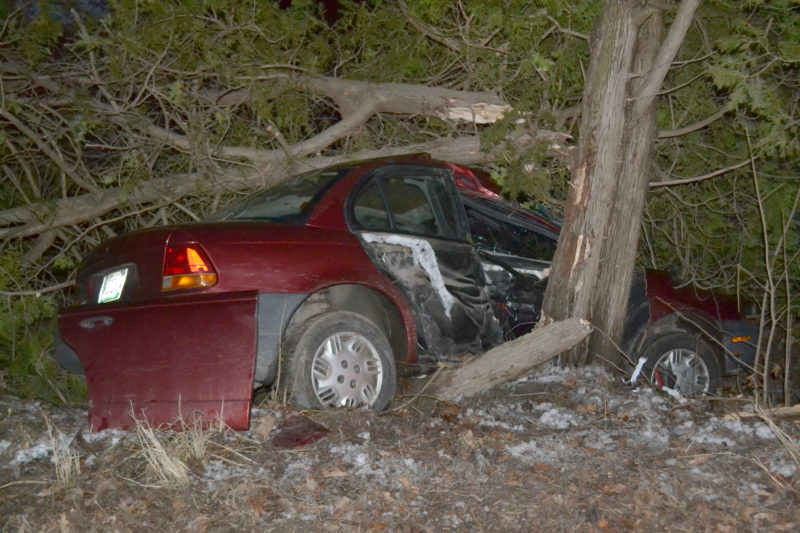 A Saturn crashed into trees the late afternoon of Sunday, Jan. 1 after hitting a patch of black ice on Route 32 in Waldoboro that contributed to an accident two days before. (Abigail Adams photo)

A patch of black ice contributed to a single-vehicle accident on Route 32 in Waldoboro the late afternoon of Sunday, Jan. 1, two days after a car was totaled just feet away after it hit the same patch of ice.

Steven Rackliff, 55, was operating a Saturn southbound on Route 32 when he hit a patch of black ice, lost control of the vehicle, swerved into the embankment on the northbound lane, and hit a patch of trees, Waldoboro Police Sgt. Jamie Wilson said.

He was transported to an area hospital with minor facial injuries, Wilson said.

The northbound lane of Route 32 in the vicinity of the accident, just south of Old County Road, was closed for about an hour and a half as the scene was cleared.

The same patch of black ice on the southbound lane of Route 32 contributed to a single-vehicle accident the evening of Friday, Dec. 30.

The Maine Department of Transportation has been called to sand the area, Wilson said. With the fluctuations in temperature, “no matter what you do (the roads) are going to freeze up,” Wilson said. He encouraged motorists to slow down and use caution.