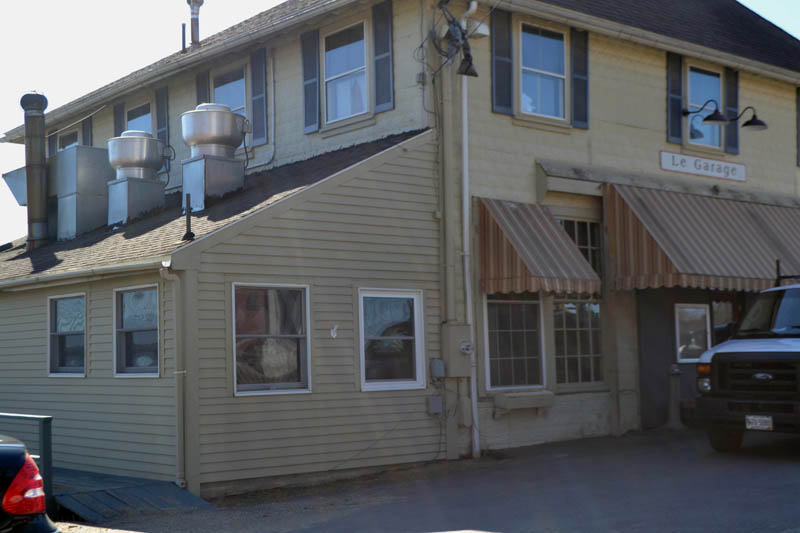 An architect for the new owner of the former Le Garage aims to conceal condensing units on the lower roof of the building’s Main Street side. The Wiscasset Historic Preservation Commission is reviewing an application for these and other changes to the building’s exterior. (Charlotte Boynton photo)

The Wiscasset Historic Preservation Commission wants more information before it approves a certificate of appropriateness for work to the exterior of the former Le Garage, which will soon reopen as the Water Street Kitchen and Bar.

Southport chef Edward Colburn bought the building at 15 Water St. on Feb. 15 with plans to complete some work to the interior before opening. Now he plans to also make some changes to the exterior.

The building is in the Village Waterfront Historic District, so any work on the exterior requires a certificate of appropriateness.

Julien Jalbert, an architect with the Knickerbocker Group, submitted the application on Colburn’s behalf.

The exterior work will include the construction of a wood-frame stairway on the side of the building. According to the application, the design of the stairway will emulate the existing decks off Water Street and the color will blend with the building’s existing deck and railings.

Colburn also proposes to create a new entry to the restaurant and replace existing canvas awnings with a permanent awning. 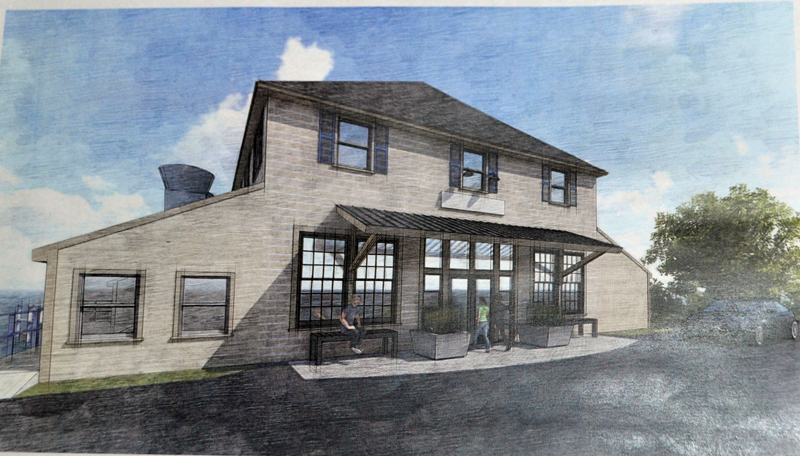 A rendering shows possible changes to Le Garage in downtown Wiscasset. The Wiscasset Historic Preservation Commission is reviewing an application for a certificate necessary to do the work.

According to the application, the Knickerbocker Group is exploring a design that will provide an attractive way to conceal several condensing units on the lower roof of the building’s Main Street side.

After reviewing the application, the commissioners asked for more information, such as the location of the outside stairway.

During a brief telephone conversation Monday, March 25, Colburn said he had received an email from the commission requesting additional information, which he will provide.

He said the Maine State Fire Marshal’s Office asked him to build the outside stairway.

The Wiscasset Board of Selectmen approved a liquor license for the new restaurant March 19.

Colburn’s application is tentatively scheduled to be on the commission’s agenda Thursday, April 4.

In other business, the commission approved a certificate of appropriateness for Dion West to enclose a porch at 5 Evergreen St.

The commission had reviewed West’s application March 7 and requested information regarding the windows he plans to use in the project.

West provided the requested information March 21 and the commission approved the certificate without opposition.

In other business, the commissioners discussed Maine’s bicentennial, which is coming up in March 2020. Commissioner Leslie Roberts briefed the commissioners on grant opportunities for planning special events in the community. Any grants would require matching funds.

The town of Wiscasset will submit applications for certificates of appropriateness to replace the fences at the Ancient and Greenlawn cemeteries.