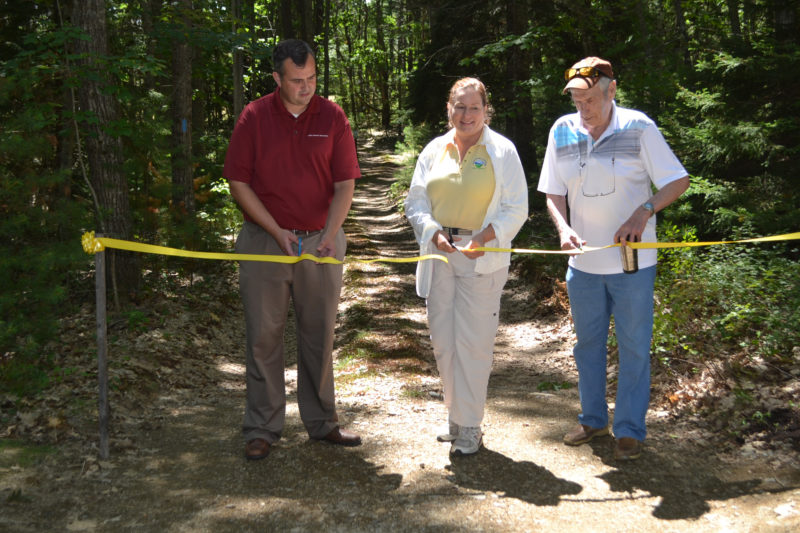 From left: David Seavey, Carrie Kinne, and George Richardson cut the ribbon at the Carl and Barbara Segerstrom Preserve at Squam Creek on Sunday, Aug. 6. The preserve on Westport Island is now open to the public. (Charlotte Boynton Photo)

Descendants of the Segerstrom family and representatives of the Kennebec Estuary Land Trust and the town of Westport Island gathered for a ribbon-cutting ceremony to open the Carl and Barbara Segerstrom Preserve at Squam Creek to the public Sunday, Aug. 6. 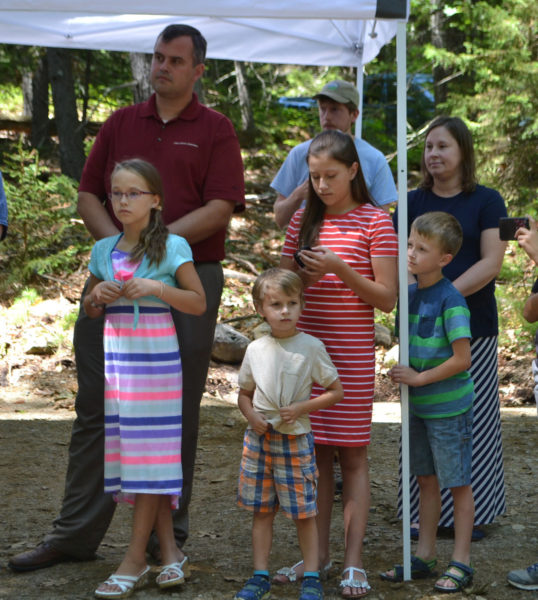 David Seavey, with his wife and six children, traveled from Michigan to represent the Segerstrom family at the ribbon-cutting ceremony for the Carl and Barbara Segerstrom Preserve at Squam Creek. (Charlotte Boynton photo)

The Segerstroms’ grandson, David Seavey, traveled from Michigan with his wife, Michelle, and their six children to represent the family at the ceremony, which marked the permanent preservation of his grandparents’ property.

After a brief presentation by Kennebec Estuary Land Trust Executive Director Carrie Kinne about how the conservation of the 144-acre preserve was made possible, the ribbon was cut by Seavey, Kinne, and Westport Island First Selectman George Richardson.

Seavey was then asked to speak on behalf of the Segerstrom family. He began his remarks with a little background. His grandfather, Carl Segerstrom, was an engineer trained at the Massachusetts Institute of Technology, and his grandmother was an accomplished cellist.

Carl and Barbara Segerstrom married in 1941 and settled in Winchester, Mass., where they raised their five children, three sons and two daughters. In the late 1950s, the Segerstroms purchased the historic house and property on Westport Island as a retreat, a place for them and their children to get away from their busy life in the Boston suburbs.

The family loved the property. “It was a place for them to come and enjoy God’s creations,” Seavey said.

Some of Seavey’s earliest memories are of coming to the island with his parents. He remembers fresh-baked apple pie with apples from the apple tree in front of the house and blueberry pies with blueberries from the backyard. “I believe the apple tree is still there,” he said.

“My grandmother had a beautiful flower garden and vegetable garden here,” he said. “She loved the wildlife here. She was known for running for her camera if she saw a deer or moose in the front yard.”

Carl Segerstrom died in 1993, when Seavey was 15. When speaking of this time in his life, Seavey became emotional. 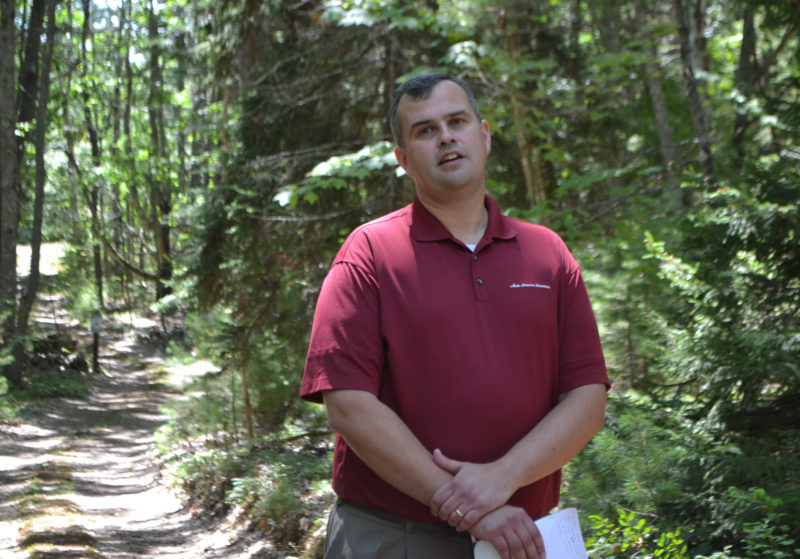 David Seavey speaks at the ribbon-cutting ceremony for the Carl and Barbara Segerstrom Preserve at Squam Creek on Sunday, Aug. 6. Seavey is the Segerstroms’ grandson. (Charlotte Boynton photo)

“I wanted to spend more time with my grandmother, so she invited me to spend six weeks with her that summer. We spent the summer between Winchester and Westport Island. We spent more time on the island. I believe the only thing we went back to Winchester for was to do the laundry,” he said with a smile.

He said she tried to teach him to drive a truck with a standard transmission on West Shore Road. “I still can’t drive a stick shift,” he said.

“I enjoyed myself so much that summer, when my fiancee Michelle and I were planning our honeymoon in 2000, I said, ‘I know just the place.’ We honeymooned here for a week,” Seavey said.

During one visit with his grandmother, she told him she was going to sell the property when she was 90 years old because she and her husband had bought it from a woman who was 90 and she thought it was the right thing to do. She told him someday he would have to say goodbye to it.

Seavey said that did not happen and he was very pleased, because the property could have been sold to a private owner instead of preserved for the public to enjoy for generations to come.

“I know my grandparents would be pleased with the conservation effort,” Seavey said. “On behalf of my mother Joan, my aunt Carol, and uncles Carl, Peter, and Paul, thank you for all the hard work you’ve done to make this a reality.”

“When I think of my kids bringing their children here, it really puts a smile on my face to know that they will have the opportunity of enjoying and appreciating the land as much as I did,” Seavey said.

The guests were invited to participate in tours of the preserve, which includes hardwood forest, wetlands, historic cellar holes, and cemeteries.

The property is the site of one of the first settlements on Westport Island, dating back to 1740, when Timothy Dunton and his family settled there. The southern portion of the property was settled by the Hodgdon family a short time after.

The land trust purchased the property in March with a grant from the North American Wetland Conservation Act, gifts from foundations and community members, and a donation from the town of Westport Island. “We used every tool in our toolbox to purchase this land,” Kinne said. 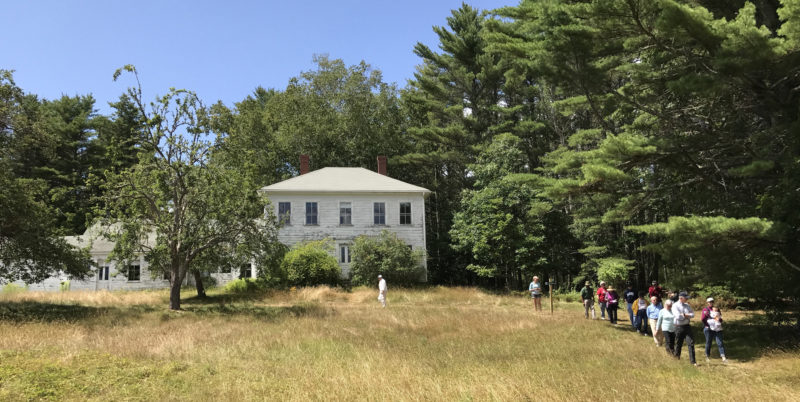 A tour passes by the old house on the Carl and Barbara Segerstrom Preserve at Squam Creek on Sunday, Aug. 6. The Kennebec Estuary Land Trust plans to remove the house, built between 1850 and 1860, due to its poor condition. The organization hopes to find someone who will move the house to another location. (Photo courtesy Kennebec Estuary Land Trust)