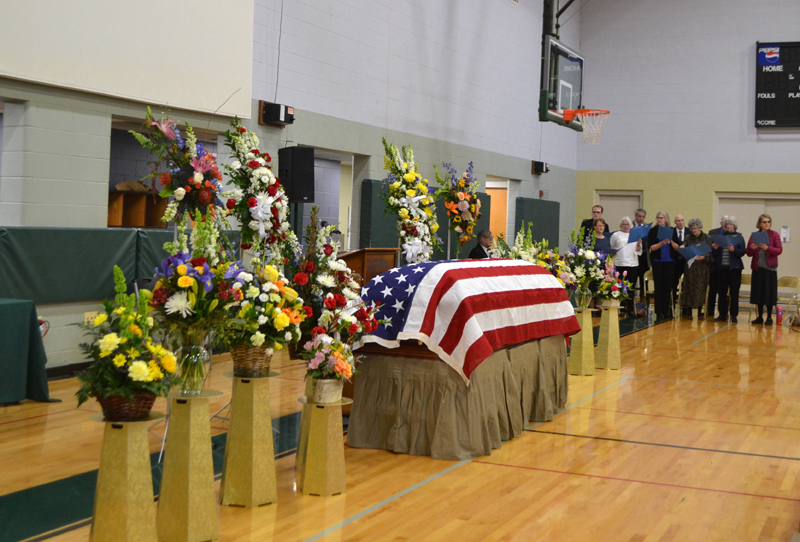 Flowers surround Roy Farmer’s flag-draped casket during a memorial service at the Wiscasset Community Center on Sunday, April 7. Farmer, a local businessman and public servant for many years, died March 26 at the age of 91. (Charlotte Boynton photo)

The family and many friends of longtime Wiscasset businessman and public servant LeRoy E. “Roy” Farmer gathered at the Wiscasset Community Center on Sunday, April 7 to honor Farmer and reminisce about his life.

Farmer died March 26 at his home in Wiscasset. His funeral service was conducted by the Rev. Marcia Richardson, of St. Philip’s Episcopal Church, with a Scripture reading by the Rev. Joshua Fitterling, of the First Congregational Church of Wiscasset.

The service included full military honors, a Masonic memorial service, American Legion recognition of his membership of 70 years, and a choir singing old hymns, including “The Old Rugged Cross” and “How Great Thou Art.” It was a fitting tribute to a man who had served his country and his community throughout his life.

Farmer is known, and has been recognized, throughout the state for his success in business, his kindness, and his generosity to others. Through comments from family members and friends at the service, the community got a deeper look into the private life of a man who had been in the public view for over 50 years.

His son-in-law, Robert Haeberle, shared some information that may not have been told previously.

Farmer was the oldest of four children and adored his mother. He worked second shift at Bath Iron Works while going to high school to help with the family finances.

While attending the University of Maine at Orono, he would come home weekends to work in his father’s grocery store, so his mother would not have to.

His contributions to civic duties include time as a selectman, a member of the town’s budget and school committees, Lincoln County register of probate, county treasurer, county bail commissioner, and much more.

“He was not a perfect man, despite what many of you think,” Haeberle said. “He and Joanne both smoked cigarettes, but quit on a bet with Dave and Mulley Soule about 50 years ago after losing a dear friend, Emily Sherman, to lung cancer.”

Haeberle said Farmer liked to have a drink now and then, but in the roughly 39 years he had known him, he rarely had more than one drink and never more than two.

“So, Roy was imperfect, just like us,” Haeberle said. “Anyone who met him quickly realized he was a regular guy. But he was more than that. You will notice that all his private and public business provided services to people. He’d sell you a house, then insure it and your car; he’d safeguard your estate in the probate office, serve the state, county, and town on all the boards he belonged to.”

Farmer was in the insurance and real estate businesses for more than 60 years. He was president and co-owner of Carl M.P. Larrabee Agency Inc., of Wiscasset, at the time of his death.

Haeberle brought laughter from the people gathered when he said, “For 30 years he bailed you and your loved ones out of jail, often at all hours of the evening, at $5 per call-out. Later it became $15.

“Roy had a special savings account where he put all his bail commissions. This account not only paid for four years of college for Kim, but also paid for Kim’s and my wedding. We had 300 people at that wedding! So I have to take this moment to thank all you lawbreakers for the wonderful things you did for our family.”

Roy was often referred to as a soft-spoken man. “He was a great listener and didn’t talk too much, so when he did say something, people listened,” Robert Haeberle said.

Farmer’s wife, Joanne Farmer, in a brief conversation, said, “Roy loved the world, and the world loved Roy.” She and Roy had been married for 67 years.

David Haeberle, Farmer’s grandson, spoke of his love for his grandfather and the positive influence he has had on his life. “He is gone, but not forgotten,” David Haeberle said in his closing remarks.

Shelia Sawyer, a longtime friend and co-worker of Farmer’s, told of her life being enriched by having known and worked with him for many years.

Robert Haeberle said the family went out to eat at a Chinese buffet in Brunswick days before Farmer passed.

“Midway through dinner Roy had severe back and leg pain, and we got him back to the car so he could adjust the seat, which relieved the pain,” he said. “As we collected ourselves and paid the bill so we could follow, I picked up a slip of paper Roy left behind from a fortune cookie, and so help me, it said, ‘Service to many leads to greatness.’ That was Roy.”

Farmer was remembered as a man who did not seek greatness, but achieved greatness through his unselfish service to others.

Following the funeral service, a reception was held in the senior center, followed by his interment at Woodlawn Cemetery.