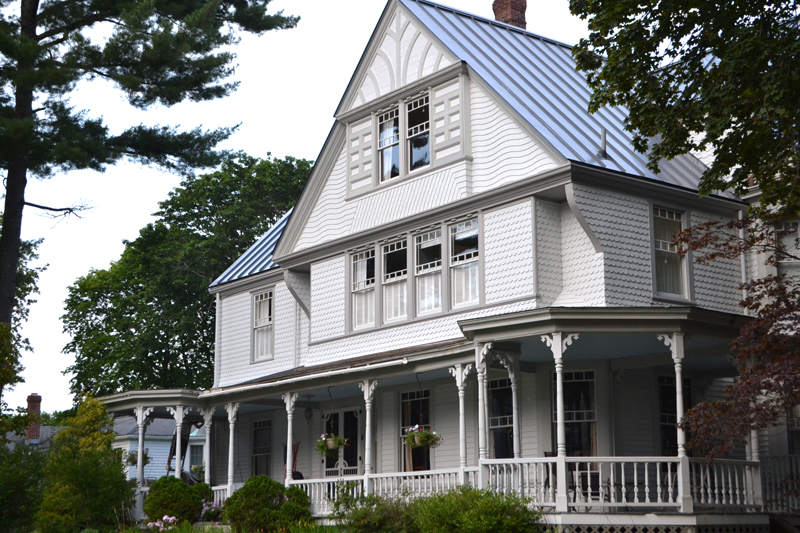 Jacqueline Pierce plans to transform a home at 15 High St. in Wiscasset into a bed-and-breakfast. (Charlotte Boynton photo)

The Wiscasset Planning Board heard about plans for a new tavern on Main Street and a new bed-and-breakfast on High Street on Monday, Aug. 27.

The planning board also reviewed an application for a subdivision on Cushman Point Road and requested a new site plan for a brewery on Wood Lane.

Dan Dyer presented plans for a tavern at 63 Main St. Dyer and his partners, Mike Collins and Dana Long, will lease the building from Wawenock LLC.

The trio also owns the former Musical Wonder House on High Street and Wild Burritos, a restaurant on Congress Street in Portland.

Dyer told the board he appreciates the beauty and history of Wiscasset and the town’s work to preserve its history.

According to his application, he and his partners plan a full-service bar and restaurant. They plan to call it the Village Tavern and hope to open for business in two to three months.

Board member Deb Pooler said the town has needed such a business since Le Garage closed in April 2017.

Board members said they did not see a problem with the proposal, but the next step is for the businessmen to provide the board with a full application. They will have to apply to the state for other permits.

Dyer is expected to be on the agenda for the planning board’s next meeting to submit the full application. He thanked planning board Chair Ray Soule for his help getting the process started.

Jacqueline Pierce, of Beverly, Mass., got the OK to move forward with the purchase of a house at 15 High St. for a bed-and-breakfast. The planning board determined the bed-and-breakfast would be a home-occupation business, since Pierce will live in the house.

Pierce plans two phases of her project. The first is to have four guest rooms in the main house. The second, to come a year or two later, is to remodel a cottage in the rear of the house. The two-bedroom cottage will be available for rent as one unit.

After the meeting, Pierce said she will move forward with an inspection of the home and other details involved in the purchase.

The planning board reviewed Joseph Gagnon’s request to divide a 2-acre parcel on Cushman Point Road. Gagnon agreed to add certain information and resubmit the plans to the board at its next meeting.

The planning board allowed Zachary Labbay, a partner with Christopher Juntura on the brewery project, to present changes to the partners’ plans, although the application was not on the agenda.

Labbay apologized to the board for errors in the presentation of the plans for the project and asked for information on what the partners need to do to move forward.

Board member Karl Olson said that, due to the changes in the project, the partners no longer need to submit a subdivision application. However, the application will need a site plan review, which could take place at the next board meeting, scheduled for Sept. 10.

Before adjournment, Pooler said the town needs a planner and asked if the board should send the selectmen a letter asking them to consider the matter.

Soule suggested that a planner who would work as needed, instead of full time, might be preferable.

The board did not take action on either suggestion.

(Correction: An earlier version of this article online and on the front page of the Aug. 30 edition incorrectly identified the building where three businessmen plan to open a tavern. They plan to open the tavern at 63 Main St., not 65 Main St. Neither 63 nor 65 Main St. are the former Key Bank building, which is 55 Main St. The Lincoln County News regrets the error.)