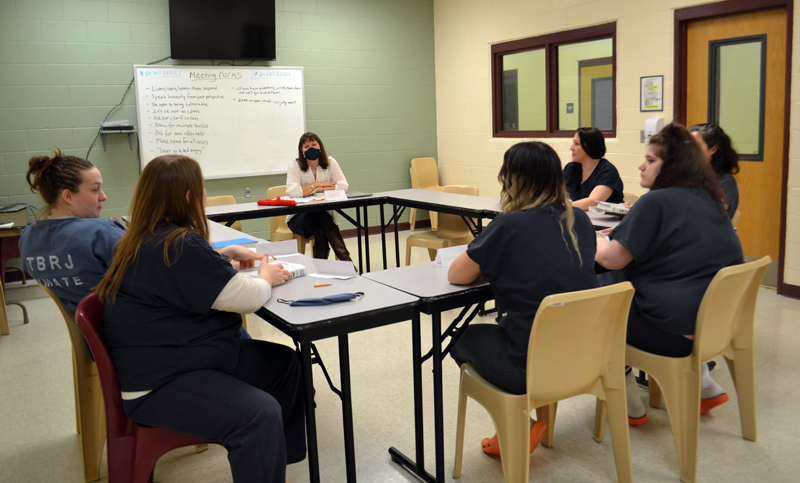 Thanks to the efforts of Dawn Wheeler, coordinator of Merrymeeting Adult Education’s RSU 1 program, who applied for a grant from the Maine Humanities Council, inmates at the Two Bridges Regional Jail are participating in a book club this fall.

The book club is part of Maine Humanities Council’s Discussion Project, a program designed to support projects serving those who are isolated from each other and the community.

It has been a six-week program at Two Bridges Regional Jail, beginning Oct. 28, and will conclude Dec. 16. The participants are reading “American Dirt,” by Jeanne Cummins, a book that has become very controversial.

A hard copy of the book was given to each participant to read. It is a story about a Mexican woman, Lydia and her son Luca, as they make their way to the United States as refugees following the murder of her husband and family by a local cartel.

During the book club meeting Thursday, Dec. 2, at the Two Bridges Regional Jail, with facilitator Anne Schlitt, from Maine Humanities Council, and six female inmates, it became very clear: “American Dirt” was interesting reading to them and created unlimited discussion from the participants.

During the meeting the discussion from the participants was controlled by a little red stuffed lobster, brought by the facilitator to be passed or tossed to the person who is going to speak next.

Two Bridges Regional Jail Book Club facilitator uses a stuffed lobster to control discussion on the book, “American Dirt,” that is being read by the club. The lobster is tossed across the table from a member to the next member to speak. The little red lobster traveled across the table several times during the book club meeting Dec. 2. (Charlotte Boynton photo)

The discussions were lively with all the participants engaged and bringing their own experiences into the discussion, as well. They discussed owning the choices they made. One participant said, “If something bad happened to me, I had a hand in it.”

Other topics discussed included how to balance the responsibility of keeping family safe with living your ideals, even if they are dangerous; how decisions by certain characters are portrayed in the story, and the portrayal and perception of the United States in the story.

Throughout the 90-minute meeting, participants appeared to enjoy reviewing what they had read, expressing their views on the story, and having fun while doing it, at times supporting the comments made by other book club members. It was clear they were interested in the book, and had their own ideas what they would have done differently than the decisions made by the characters in the story.

According to Wheeler, some of the participants in the book club group will be joining the Merrymeeting College Transitions class at Two Bridges Regional Jail. The purpose of the program is to help people that need a brush-up on writing and math skills to prepare for college when they are released. The programming is completely free to all participants.