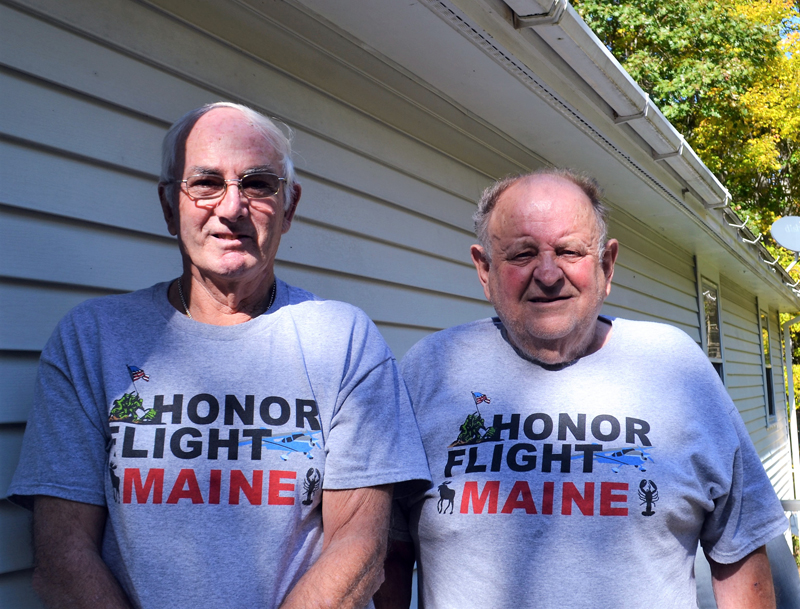 Two Lincoln County veterans were among the honorees treated to a free round trip to Washington D.C. Sept. 23-25, courtesy of Honor Flight Maine.

Lifelong friends Jack Frey, of Newcastle, and Stanley Benner, of Bristol, were drafted at the same time in 1966, went to basic training together at Fort Lewis, Washington, and were later assigned to the same infantry division.

They served side by side in Vietnam and came home around the same time in 1967. Fifty-five years later, they had the opportunity to travel to Washington D.C to visit the capital’s war memorials together. Today the old friends say it was a trip they will never forget.

During a recent interview, Frey and Benner said their welcome home last month was very different from the welcome they received returning home from Vietnam in 1967. This time, after their plane landed in South Portland, returning veterans were greeted with ceremonies arranged by Honor Flight Maine including a band and a small parade, and celebrated by supporters and family members.

Frey said the Vietnam War was not a popular war. When he came home in 1967 he was told not to wear his uniform, and there were no welcome home parties. At that time he didn’t care, he said. He was just so happy to be home. 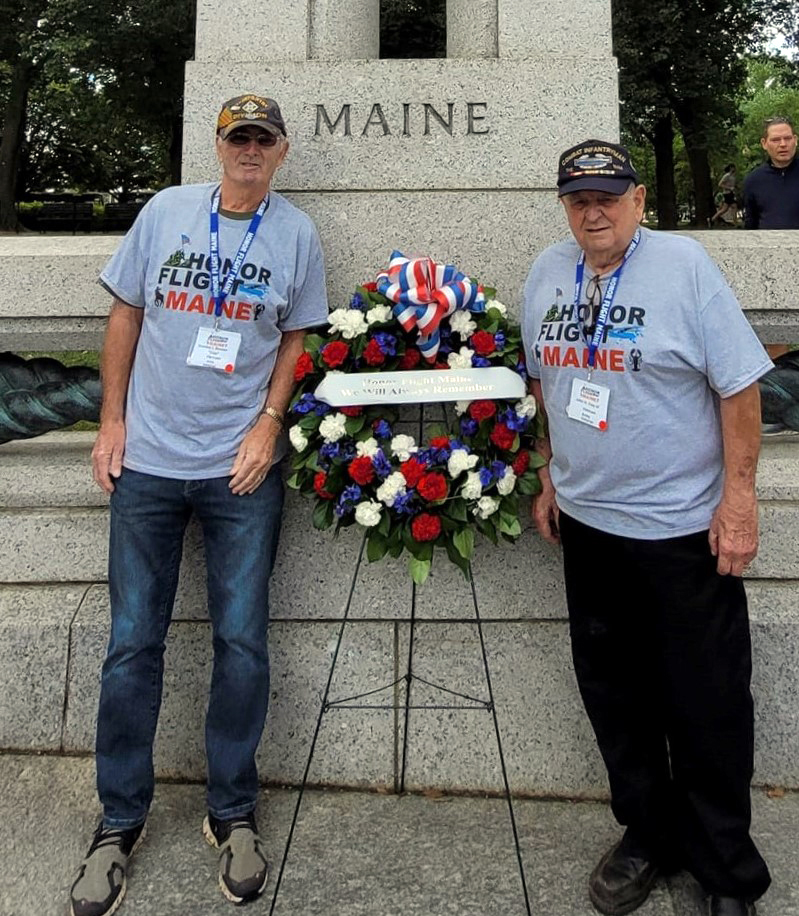 Asked if he thought it would have helped if he had been able to talk about his service, Benner said he thinks it would have. Benner and Frey both suffer from Post Traumatic Stress Disorder related to their combat experiences.

Founded in 2005, the Honor Flight Network is a national nonprofit network of independent hubs working together to honor America’s veterans with an all-expenses paid trip to the memorials in Washington, D.C. One of those hubs, Honor Flight Maine is based in Portland.

Each veteran on an Honor Flight is required to have a guardian, usually a person younger than the veteran, who is able to push a wheelchair and the veteran, together weighing up to 200 pounds, at least four miles.

Benner and Frey, both in their 70s, were guardians for each other. They were given one wheelchair, which neither of them used. Instead, they took turns in pushing the empty wheelchair around.

Frey said Benner tried to get a photo of him being pushed in the wheelchair but Frey refused to accommodate Benner’s request. There was a lot of walking required at several war memorials, as well during the trip to see the changing of the guard at the Tomb of the Unknown Soldier. Benner and Frey admitted their legs got very tired and they were ready for bed when the day ended.

However, they said, the trip was worth every ache and pain they said. The highlight for the friends was the visit to the Vietnam Memorial. Both men said it was an emotional time with many tears flowing as they looked at the names of men they served with in Vietnam on the memorial’s wall.

During their visit, they witnessed an emotional event for a fellow veteran. A Vietnamese tour guide, who was assisting people at the memorial, had his two young sons with him that day. The boys walked up to the veteran and said, “Thank you for your service, sir.”

According to Frey and Benner, the veteran became very emotional after receiving the “thank you” from two Vietnamese children. Their appreciation overwhelmed him and those who witnessed it.

Benner and Frey said they particularly enjoyed talking with other veterans during the trip and sharing stories of their military service. Some of these stories they have never told before. Some could only be shared with fellow veterans: men lived through some of the same kind of events Frey and Benner remember all too well.

Vietnam was a different type of war, Frey and Benner said. Rather than uniformed militaries moving soldiers and equipment against each other like chess pieces on a board, Vietnam was fought against an irregular enemy in a tropical jungle setting. It was hard to tell Vietnamese friend from foe and there was no way of knowing when and where the enemy would attack.

Where Benner and Frey were stationed, there were no barracks, no beds, no showers, no cooked food; and the only transportation in or out of camp was provided by helicopter. Their barracks were two raincoats snapped together to make a tent for shelter. Their bed was the ground.

Discussing the hardships they had to deal with in Vietnam, Frey and Benner vividly recalled they were either drenched with water, or drenched by sweat from the heat. 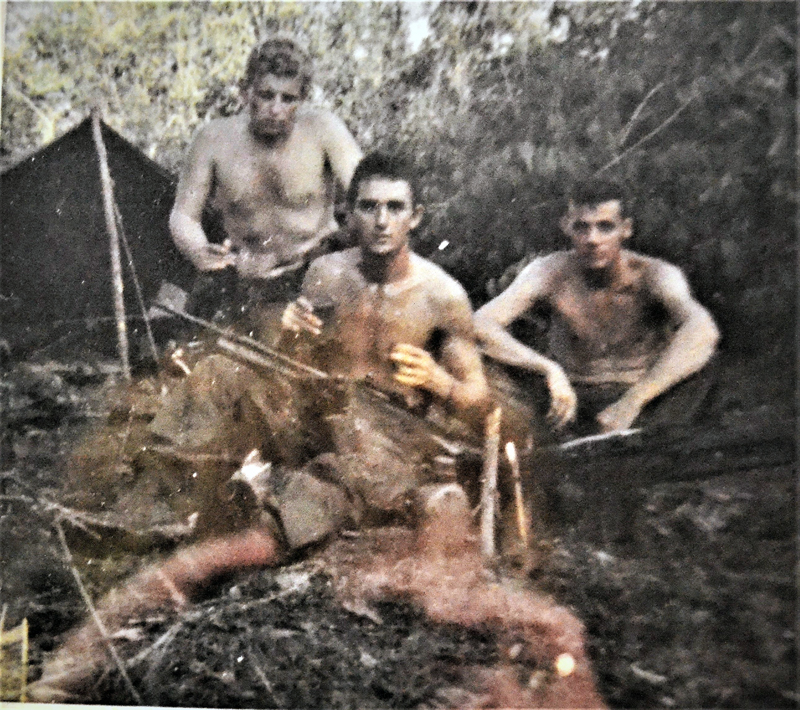 This photo was taken in Vietnam in 1967. From left, Jack Frey, from Newcastle, Stanley Benner, of Bristol, and John McDonough, of Dorcester, Mass. (Photo courtesy Jack Frey)

Frey told a story about his 21st birthday, June 8, 1967. The mailman knew Frey and knew it was his birthday, so he put a case of beer in a mail bag, and dropped it from the helicopter.

When the case hit the ground, it sounded like a bomb had gone off Frey said. “Watching that beer go into the ground was a hardship to me that hot day,” Frey said with a chuckle.

Frey and Benner said they not only fought the enemy, they fought the many elements of the country: heat, monsoon rains, insects, malaria, and jungle rot on their legs and feet, created by having to wear the same wet stockings and boots on their feet for days at a time.

Frey and Benner, and their company were transported many times by helicopter. On at least one occasion they were transported to an ambush site to retrieve the wounded and the dead, while still being attacked by the Viet Cong. During their time in-country Benner and Frey said they witnessed sights they have never forgotten.

The two friends were scheduled to return home at the same time. Benner was treated for malaria earlier than Frey, and was able to come home on schedule. Frey contacted malaria just before leaving Vietnam and was sent to a hospital in Japan for treatment.

Three days after he left Vietnam to be treated for malaria, Frey said he received word his entire company had been wiped out. That is something he has lived with ever since.

“If I hadn’t gotten malaria, I wouldn’t be here today,” he said.

After returning to civilian life, the two worked at a variety of jobs before ending up with their own businesses. Jack Frey became a contractor, founding Jack Frey Builder, Inc., in Newcastle. Benner became an oil burner technician and started Benner Burner Service in Bristol.

Benner is one of 14 children. He has three brothers and 10 sisters. A graduate of Bristol High School, Benner and his wife, Patricia, have been married for 40 years. The couple has two children and two grandchildren.

Frey is a graduate of Lincoln Academy. He and his wife Sylvia have been married for 44 years. The couple had four daughters, one of whom passed away in 2016. The Freys have nine grandchildren and one great-grand child.