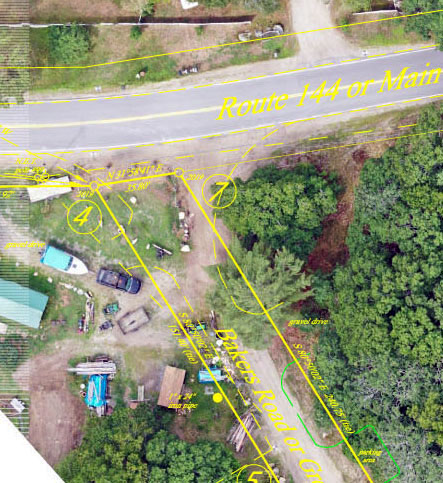 A photograph of a recent georectified aerial survey of Route 144 and the Baker Road on Westport Island shows objects encroaching in the town’s right of way. The Westport Island Select Board have sent the property owners notice the objects must be removed. (Photo courtesy Westport Select Board)

A long simmering road dispute in Westport Island has bubbled up again as the Westport Island Select Board has sent a letter to two Baker Road residents demanding the residents remove obstructions in the town’s right-of-way or face legal action.

Acting in response to recent citizen’s complaints, on Monday, Oct. 31, the select board voted to send the letter to Albert and Barbara Greenleaf, giving them notice obstructions allegedly placed in the town’s right-of way, along the Greenleafs’ property line, need to be removed within 15 days of the Nov. 1 letter, or the town may take legal action.

The Baker Road dispute has been an ongoing issue for the town. In August 2015, Westport Island filed suit against the Greenleafs in Lincoln County Superior Court, asking the court to order the Greenleafs to remove debris obstructing the right-of-way and to prohibit future obstruction of the road.

According to the select board, the town has received several complaints from residents, reporting the obstructions are back in the town’s right-of-way, creating safety problems for vehicles.

In the Nov. 1 letter sent to the Greenleafs, the select board said the obstructions, which include metal debris, pipes, poles, a snowplow blade, boulders, electrical lighting, large logs installed upright into the ground, and a connecting rope, prevent safe passage for vehicular traffic and create a danger during the winter season. Specifically, the snowplow requires unobstructed passage along the edge of the road.

Town officials also demanded at least five days notice of plans to remove the debris, so town officials could observe the removal.

Further, the letter states if the obstructions are not removed, the town may exercise its right under Maine law to remove them and bill the Greenleafs for expenses accordingly.

During a telephone interview Tuesday, Nov. 8, Albert Greenleaf said Westport Island, the town, has been infringing on his property for many years, and he will continue to fight for what he considers to be his land.