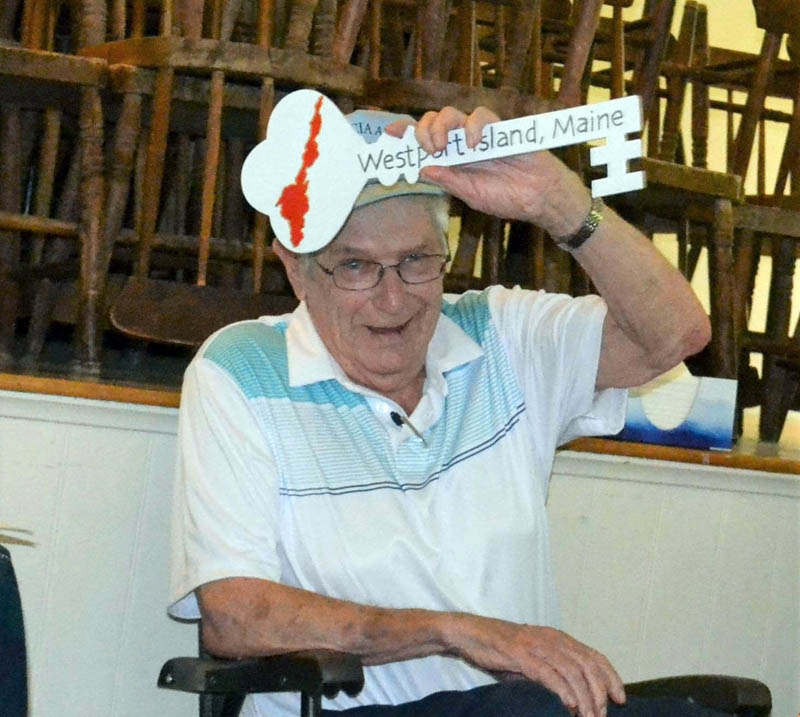 Former Westport Island First Selectman George Richardson Jr. displays a wooden key to the town presented to him by Town Clerk Julie Casson during the celebration of his service on Sunday, July 31. (Charlotte Boynton photo)

Westport Island’s old town hall was busting at its seams on Sunday, July 31 when people gathered to thank longtime First Selectman George D. Richardson Jr. for his decades of service to the town. During the event, Richardson received praise from state, county, and local officials, as well as from the residents of Westport Island.

Richardson decided, after serving as selectman for 32 years, and chairman of the board for the past 24 years, to retire and to pass on the mantle of leadership to others to take care of the town he loves, a town he has worked to make better for its citizens.

Richardson has always lived on Westport, with the exceptions of when he attended Maine Maritime Academy and two years he served in the U.S. Navy.

He and his wife, Marcia, have been married over 60 years. The couple raised five children on the island, three sons and two daughters.

Richardson was the only son of George Richardson Sr. and Teresa Richardson, being raised with two sisters. After being discharged from the U.S. Navy, Richardson came home and worked with his father fishing and lobstering, a career he continued on his own until 2005.

Over the years Richardson has been called many things by many people. On the island he was often referred to as the “Mayor of Westport Island,” “Captain,” “King George,” “a character,” and most often, a friend.

Chris Cooper, of Alna, served as the master of ceremonies for Richardson’s retirement party. Cooper, who is noted for his humor and one-liners, has also served as the moderator at the annual town meeting on the island for the past few years. 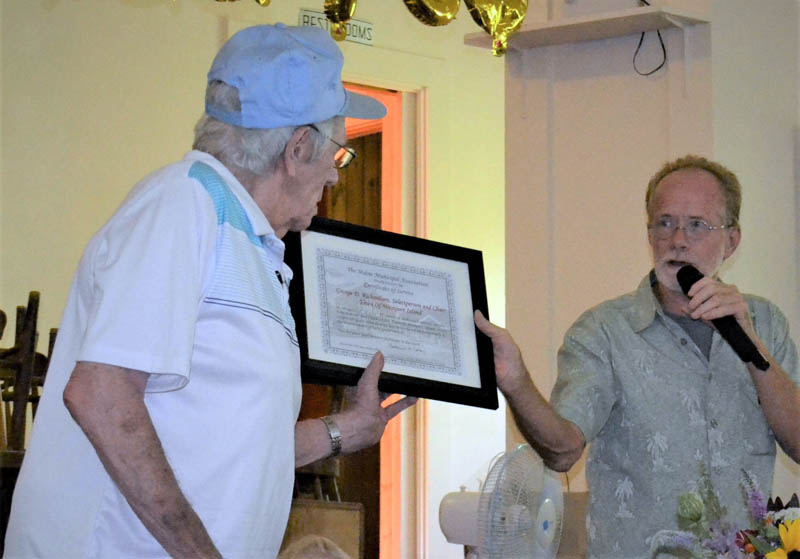 Cooper opened the ceremonies by paraphrasing a quote from a play written by William Shakespeare about the funeral of Julius Caesar, “I come to bury Caesar, not to praise him.” Cooper reversed the quote, saying, “We are not here to bury George, we are here to praise him.”

Throughout the afternoon, praise and recognition brought laughter and tears to many of the guests, and the presenters.

Maine Department of Administration & Financial Services Commissioner Kirsten Figueroa read a letter by Gov. Janet Mills congratulating Richardson for his many accomplishments to his community. The presentation by Figueroa was made all the more special as she is the daughter of the late Ben and Sandra Crehore, both of whom were very active members of the Westport Island community. Ben served as a selectman and Sandra represented Westport on the RSU 12 Board of Directors.

Wright Landing Committee Chairman Richard DeVries thanked Richardson on behalf of the committee and for the support and work he put into making it possible for the town to have a public landing at the Ferry Landing.

Westport Island Third Selectman Ross Norton said he had learned a lot about Richardson while serving the select board with him. He also said he found some interesting items in Richardson’s desk while looking for papers, such as dog treats, cookies, and a variety of other treats; he wasn’t sure if they were for Richardson or the dogs.

Second Selectman Jeff Tarbox said when he moved to the island in 1980, he met Richardson, who took him fishing. Before they got into the boat to go fishing, Richardson let off a round from his gun. 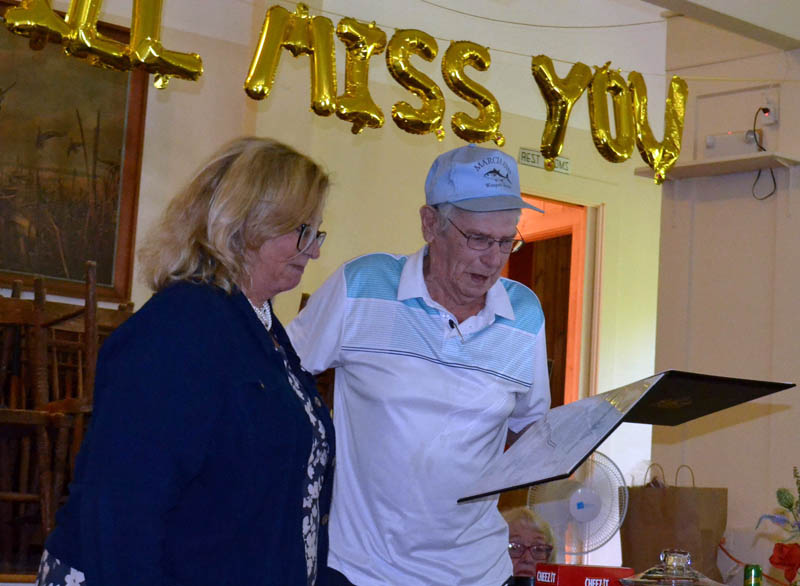 “We did not catch any fish that day,” Tarbox said.

Town Clerk Julie Casson’s two unique gifts brought laugher to Richardson and guests. Casson first presented him with a wooden key to the town. The second gift Casson presented to Richardson was a replica of a large explosive painted red with a long wick.

Richardson has often said he liked Westport Island the way it is, and did not want to see it change drastically, sometimes blaming the Westport Island Bridge for making easy access to the town, because before the bridge a ferry was the transportation for getting on and off the island. He sometimes would jokily say he would like to blow up the bridge.

When receiving the gift, Richardson added to the laugher by asking for a match.

Westport Island resident Dan Bradford said he was Richardson’s sternman nearly 60 years ago and added “It’s a good thing the statute of limitations has run out.” His comment also received applause and laugher.

“I will challenge anyone here to say they have known George longer than I have, we have been friends for many years,” Trudy Harriman Metzger said. She was not challenged.

Richardson’s grandson Caleb said his grandfather is a great husband, a great father, a great grandfather, and all in all just a great man.”

In closing the ceremony, Cooper pointed out at retirement celebrations, in some cases what you hear are just words. 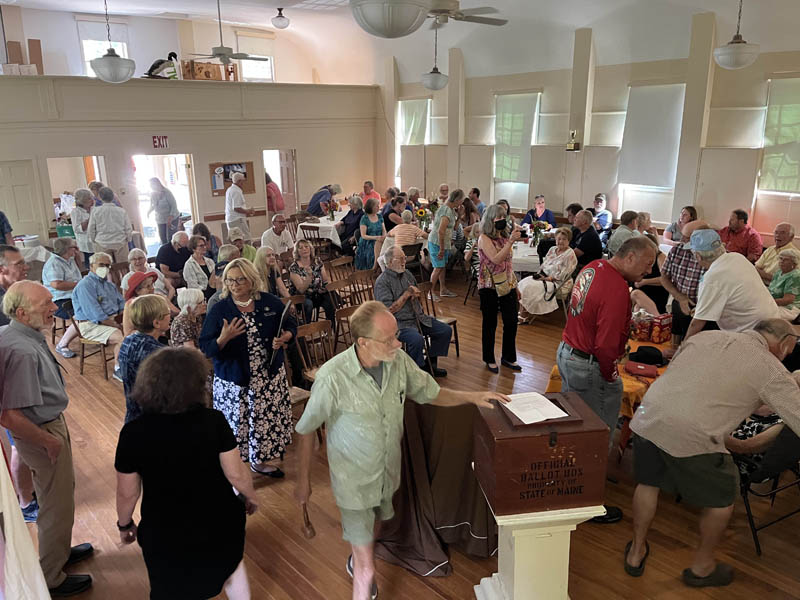 “What you heard here today is true,” Cooper said. “You will go a long way and a long time before you find someone that gave as much to the town as he has given. It has been my privilege to help celebrate his career with the town.”

As guest of honor, Richardson was given the last word. He stood from his chair and said he was humbled by the amount of people that showed up to his retirement.

“I love Westport Island and the people on the island, that is most of them,” Richardson said. “I wish you all well and happiness.”

Richardson received a standing ovation and an applause that lasted several minutes.

According to the 2021 annual report that was dedicated to him, Richardson’s service to the town includes 32 years as selectman, as well as tenures as harbormaster, member of the RSU 12 Board of Directors, conservation commission, shellfish commission, history committee, county budget advisory committee, Lincoln County Regional Planning Commission, and the Maine Municipal Association Executive Committee, for which he received the prestigious MMA Ethel Kelley Memorial Award.