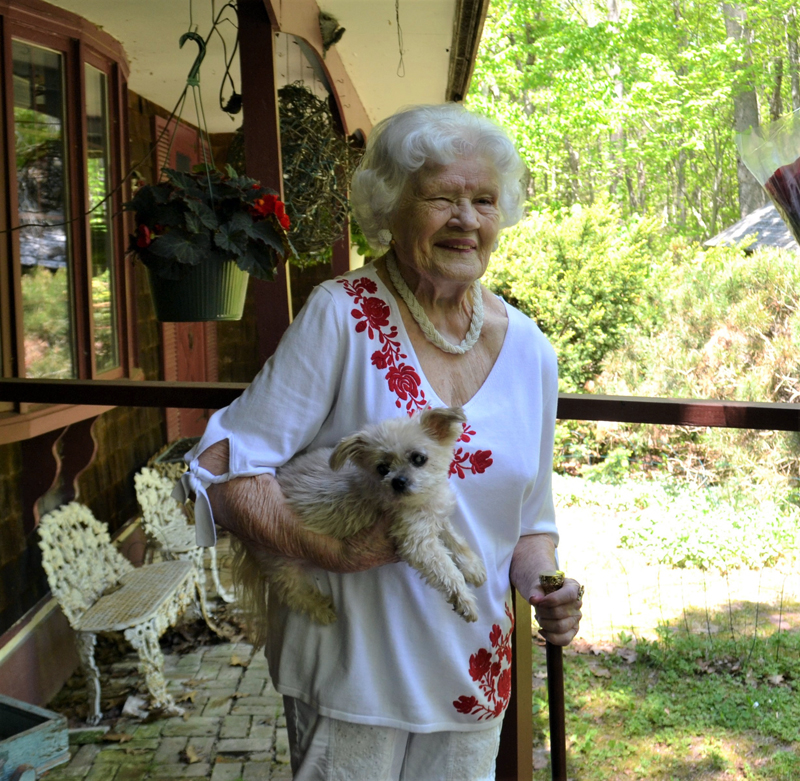 Bette Monfort holds the Boston Post Cane and her 10-year-old dog, Candy, at her home on Westport Island, Friday, May 21. The cane honors Monfort as the town’s eldest resident. (Charlotte Boynton photo)

Bette Monfort enthusiastically accepted Westport Island’s Boston Post Cane, honoring her as the town’s oldest resident, during a presentation at her home on Friday, May 21.

When the board of selectmen and other town officials arrived with the cane and a dozen red roses, she said, “I am 96 1/2. I will be 97 the first of October. I was hoping to live long enough to get the Boston Post Cane. I was getting tired of being a runner-up for the last few years. I have earned it; I have lived here for 50 years.”

She spoke with a smile while holding her dog, Candy. She called Candy “old, blind, and deaf.”

Bette and her late husband, Platt, bought the property where she still lives in 1970, moving to the island from New York. She said they purchased the property sight unseen and arrived in midwinter to 6-8 inches of snow. 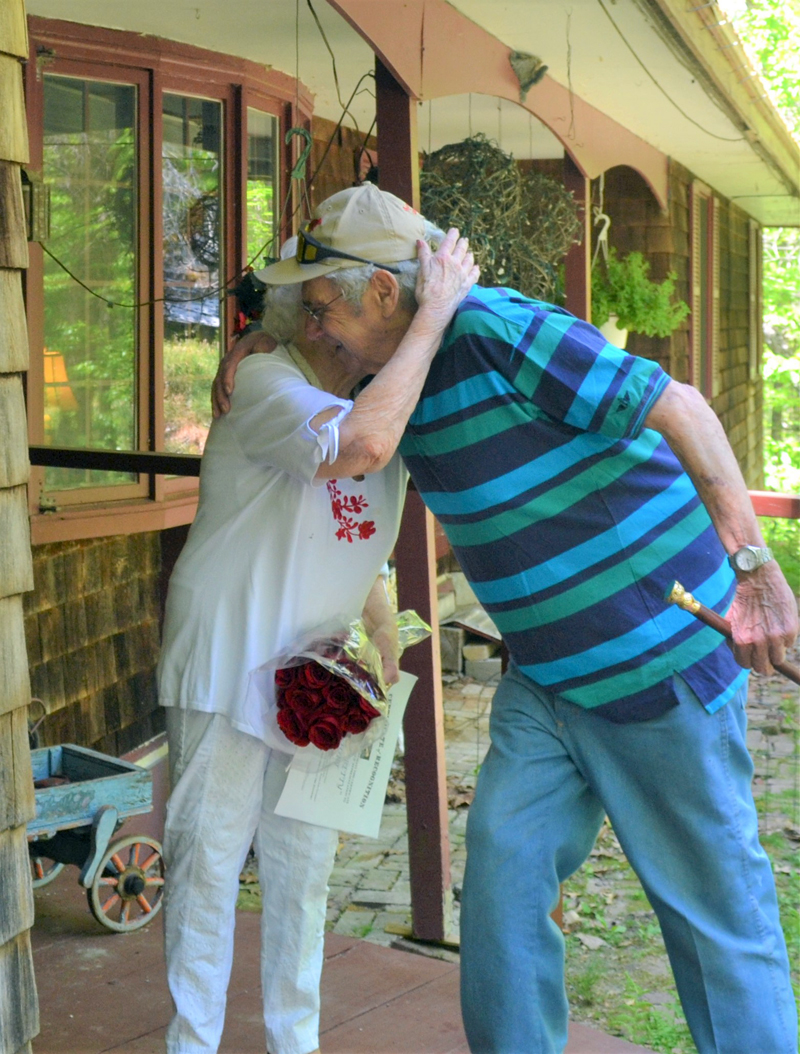 When they arrived, Platt was telling her how beautiful it was. “I told him, ‘I don’t care how beautiful it is, I am cold,’” Bette said. However, she came to love living on Westport Island and has enjoyed the many friends she has made over the years.

Bette and Platt married in 1946 and lived in New York for 25 years. They raised two children, Gary and Susan. Bette said Platt wanted to get out of New York and move to Maine. “So here we came,” she said.

After moving to Maine, Platt started a business, Monfort Associates, building lightweight canoes from aircraft material. “He was very well known in the boating trade for his inventions,” Bette said.

Platt died in 2005 and Bette ran the business for a few years after his death.

Bette said she is sad that she can no longer drive. For many years, she was a familiar sight in town driving her red 1999 Mercedes-Benz. She said it broke her heart to sell it. Rumor has it that she was known around town for breaking the speed limit, at times, in her little red sports car.

First Selectman George Richardson Jr. presented Bette with the cane and the roses.

Bette pointed out that the roses matched those on her outfit.

“I hope I will be able to hold onto this title for a while,” she said. She thanked the selectmen, Town Clerk Julie Casson and Deputy Town Clerk Gaye Wagner, and everyone in attendance. She gave Richardson a hug.

The publisher of the Boston Post, Edwin Grozier, gifted gold-headed ebony canes to hundreds of New England towns in 1909 with instructions to present the cane, with the newspaper’s compliments, to the eldest male resident of the town.

The Boston Post went out of business in 1957, but the cane tradition continues in many New England towns.

Westport Island revived the tradition of presenting the Boston Post Cane to its oldest resident in 2014, after purchasing a replica cane.

Bette is the youngest person to hold the honor since. The first recipient was Vera Cleaves, who was presented the cane on her 100th birthday in 2014 and kept it until her death in 2017.

The cane then passed to Elizabeth “Betty” Pierce, also on her 100th birthday. Pierce passed away in 2019, just before her 102nd birthday.