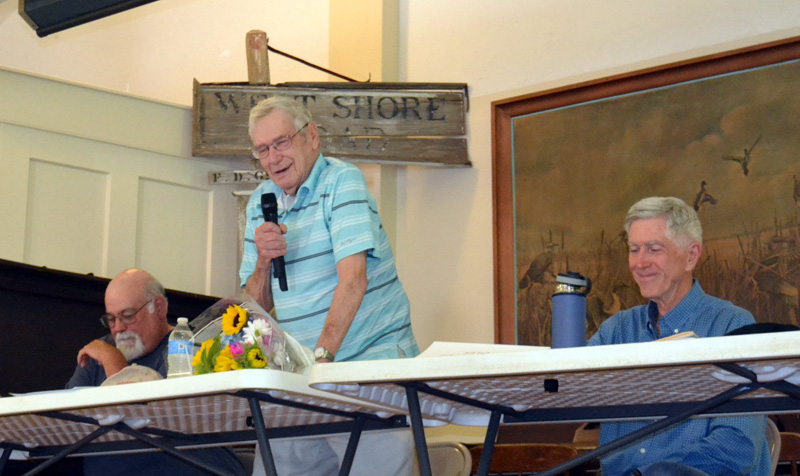 Westport Island First Selectman George Richardson thanks residents for their support for allowing him to serve a town he loves for so many years at the close of the town’s annual town meeting on Saturday, June 25. (Charlotte Boynton photo)

Westport Island residents had a busy annual town meeting on Saturday, June 25, during which they approved the 47 articles on the warrant, swore in town officials, and paid tribute to outgoing longtime First Selectman George Richardson Jr. with a standing ovation.

Although all the articles on the warrant were ultimately approved, there were a few that created questions and comments from the voters. Moderator Chris Cooper reminded the voters how lucky they are to enjoy that form of government, where minds can be changed through listening to what is being said by their fellow citizens.

An article requesting up to $60,000 for legal fees, which included $45,000, if needed, to cover cost of possible Baker Road litigation, created discussion. The Baker Road issue of complaints from residents with obstructions being placed on the town’s right of way has been on the select board’s desk for several years, and within the courts of Lincoln County never reaching a solution.

Westport Island resident E. Davies Allan, speaking in opposition of the article, suggested the town deal with the problem of the Baker Road by compromising, pointing out the issue had already cost the town a lot of money.

The selectmen said the town has tried comprising for several years and it was not working. Their legal advisor suggests the town consider legal litigation to resolve the problem.

Westport Island Fire Chief Hutchinson said the Baker Road is a hazard, and a safety issue.

“If there was a fire on the road a fire truck would have difficulty in getting to it,” Hutchinson said. 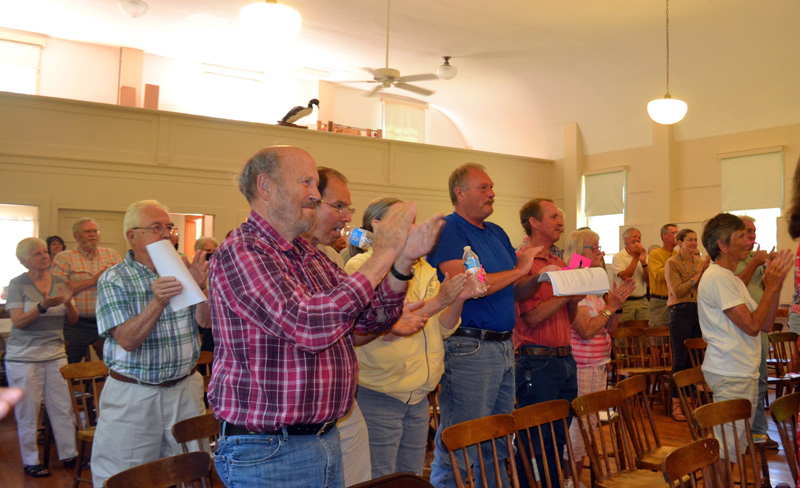 Road Commissioner Garry Gromwell said plowing the road is also a problem. “The road becomes narrower every time I go down it.” Cromwell said.

After further comments from citizens supporting the article and the selectmen, that something had to be done to correct the problem now, Allan stood up and said he withdrew his objection to the article. Cooper called for a vote and the article passed.

Allan also attempted to amend Article 7 for the harbormaster to receive $10 for every new mooring permit issued in addition to his stipend. Harbormaster Ted Christie said he appreciated Allan’s gesture to increase his pay, but it was not necessary.

Allan said he withdrew his amendment, the article passed as presented, authorizing the deposit of the mooring permit fees to be deposited to the capital reserve mooring account dedicated to paying the harbormaster’s annual stipend, costs associated with enforcement of the waterways and harbors ordinance, and administrative costs of the harbormaster and the harbor committee.

Article 6 was approved with no discussion, revising the waterways and harbor ordinance creating a schedule of mooring fees that establishes a system of annual renewal of mooring permits at a cost of $10 instead of a one-time application and payment of $10.  The collected fees will support the management and enforcement of the ordinance.

William Hopkins asked the select board for an explanation of Article 11, a request to increase the property tax levy limit set by L.D. 1. Municipal property tax levy increases are limited to a formula based on assessment growth, income, and inflation. The limit can be overridden by a majority vote at a town meeting or by a referendum vote. A secret ballot vote is required at a town meeting. 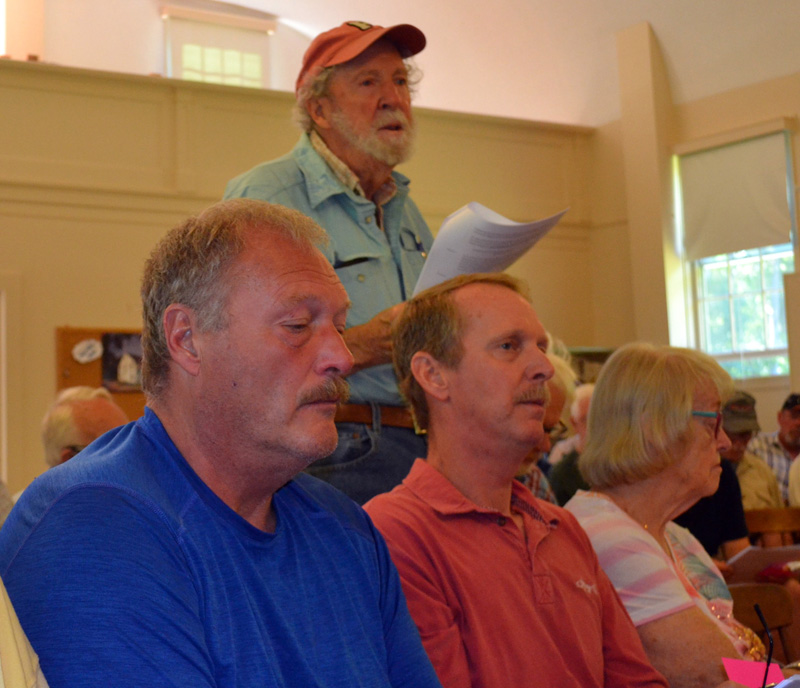 Westport Island resident E. Davies Allan stands and makes a motion to amend a warrant article at the town’s annual town meeting on Saturday, June 25. Seated in front of Allan is the family of retiring First Selectman George Richardson  his sons Chuck and Garry and wife Marcia. (Charlotte Boynton Photo)

Hopkins asked the select board for the total budget figures, Richardson referred the question to Deputy Town Clerk Gaye Wagner, who was at the computer with the figures in front of her.

Article 11 was approved to increase the tax levy limit of $1,254,314 with a vote of 51-2 with one blank ballot. The adoption of the article will allow the town, in the event the municipal budget approved results in a tax commitment that is greater than the property tax levy limit, to levy a tax greater than is allowed by the L.D. 1 levy.

Article 30 requested a change in the town’s website and email addresses from westportisland.us to westportisland.gov to increase web-based security which was recommended by the Maine Secretary of State’s office and the U.S. Homeland Security’s Cyber Security and Infrastructure Security Agency. The article also request to pay Burgess Technology Services up to $280 to provide the support for the conversion.

A Westport Island resident asked why this question required an article on the town meeting warrant.

“We really didn’t need to bring it to town meeting, we wanted to get the word out of the change, and decided a good way of doing that it was to have the question on the warrant,” Wagner said. The cost of the conversion may be reimbursable by a federal grant.

Article 36 addressing phase two of five-year road maintenance plan with an estimated cost of $500,000 passed with one question from a voter asking if there would be competitive bidding for the work. The answer given by road committee member James Cromwell was “definitely yes.” 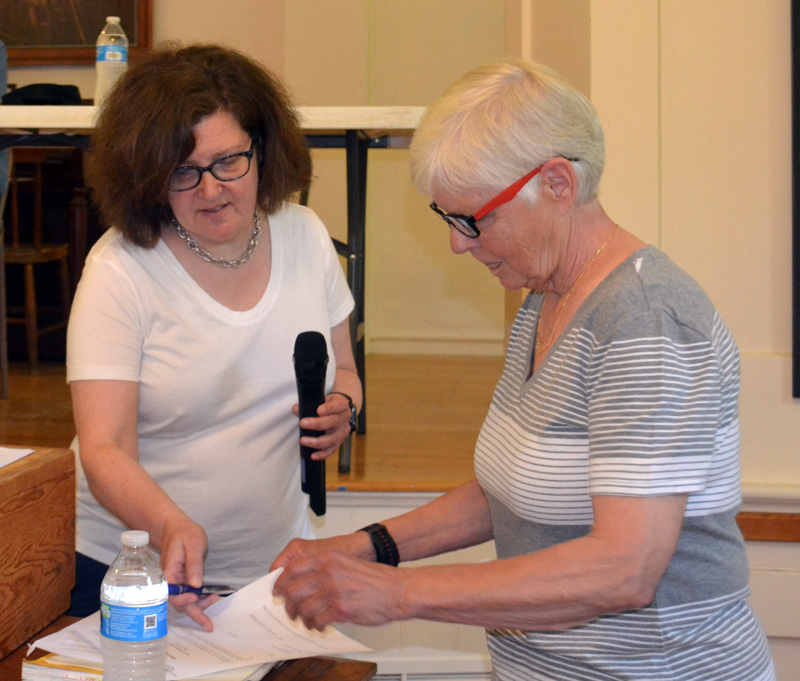 Residents also approved the appropriation of $31,674.66 from the Coronavirus Local Fiscal Recovery Funds, and interest from the federal government to fund one or more infrastructure improvement projects. 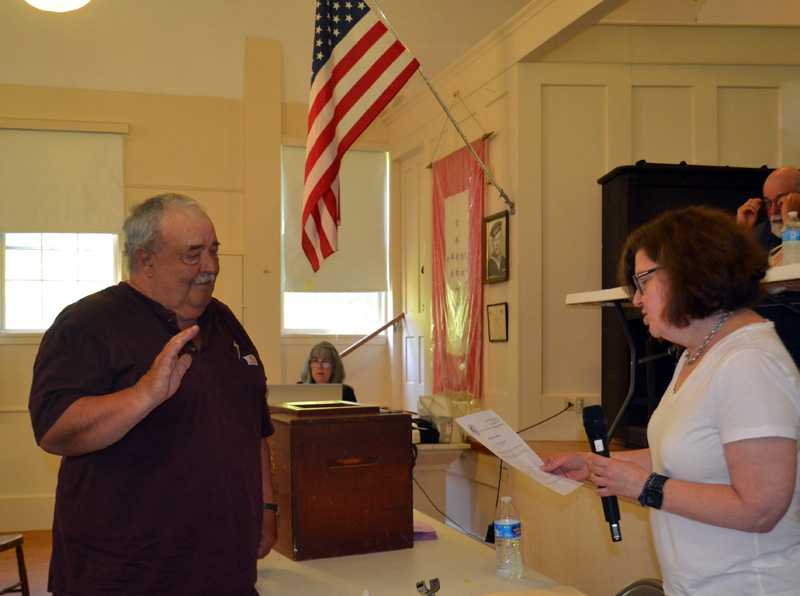 The Westport Volunteer Fire Department request of $62,000, of which $1,000 will be used for direct payments, and $61,000 for direct purchases and stipends for qualifying fire department volunteers was approved with no discussion. The voters also approved $6,197 for the blanket supplemental insurance provided through Maine Municipal Association, and $1,300 for workmen’s compensation and $1,000 to be raised and appropriated for training residents in approved emergency medical technician courses.

Before the motion was made to adjourn, the town office staff presented Richardson with gifts. Town Clerk Julie Casson expressed the town staff’s appreciation to Richardson for his leadership and support to them over the years.

An emotional Richardson stood up and thanked the voters for their support over the past years, receiving a standing ovation and a very strong applause from the citizens.

A motion was made to adjourn.

“Those in favor of the motion stand up and leave the building,” Cooper said. He also received a loud applause from the voters for his service as moderator of their town meeting.