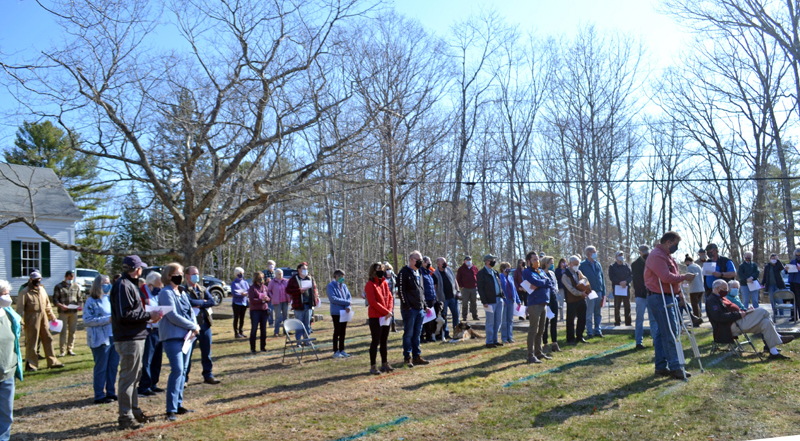 By a vote of 79-1 in a special town meeting on Saturday, April 10, Westport Island residents advanced a proposal that could expand high-speed internet access throughout the island.

The vote authorizes the Westport Island Broadband and Cable Committee to apply for a grant from the ConnectMaine Authority and makes town funds available to provide a 10% match.

The in-person special town meeting was on the green between two historic buildings, the 1794 town hall and the Westport Community Church.

The voters elected Chris Cooper, of Alna, to serve as moderator. Cooper  conducted the meeting in his unique manner, using one-liners to keep the voters engaged and focused on the issues under discussion.

Cooper started his work by reading the 173-word Article 2, the broadband proposal.

“I am going to read this article once. I am not going to get paid enough to read it twice,” he said, drawing laughter from voters.

Several residents went to a microphone to ask questions about the article, answered by broadband and cable committee members Ralph Jacobs and Jason Kates.

A resident of the Rum Cove subdivision asked if the initiative would make broadband available to the subdivision. Jacobs said it would.

Resident E. Davies Allan asked if the project would upgrade the DSL service available on the island. DSL, which stands for digital subscriber line, provides internet service by way of telephone lines.

Jacobs said the project would not impact DSL service, but DSL users could change providers if they choose.

Kates said 911 data was used to identify the 205-plus homes on the island that lack access to broadband service.

Resident Richard DeVries, an island representative to the RSU 12 Board of Directors, spoke in support of the article, pointing out the importance of broadband for students during the COVID-19 pandemic, as well as for people working from home.

Thomas Porter, a business owner on the island, said he recently tested the speed of his internet service and clocked it at 12 megabits per second. Spectrum would offer speeds up to 200 Mbps.

Jacobs said the project would not impact property taxes. The town will take the match from surplus and from funds on hand for broadband. The town will pay back the surplus with federal COVID-19 relief funds, if guidelines for the federal dollars allow.

The voters received their ballots when they checked in with the election clerks prior to the meeting. When it was time to vote on Article 2, Town Clerk Julie Casson and Deputy Town Clerk Gaye Wagner circulated a ballot box among the voters at the open-air meeting.

Cooper announced the results of the vote as 79 in favor and one opposed. “That one person should be long gone from the meeting,” he quipped.

Residents then voted to adjourn, with one voter in opposition. “That no vote is still here,” Cooper said with a chuckle.

Also in attendance was Cooper’s dog Fancy, who was very well behaved throughout the meeting.

The town conducted the meeting in accordance with public health guidelines. Masks were required and lines were spray painted on the grass to mark the appropriate distance between rows.

Casson said after the meeting that the town is considering having its 2021 annual town meeting outdoors as well. The annual meeting is scheduled for June 19.

At the selectmen’s meeting Monday, April 12, broadband and cable committee member Jeff Tarbox reported that fellow member Al Doman had submitted the ConnectMaine grant application and had already received questions. Jacobs is responding to the questions.