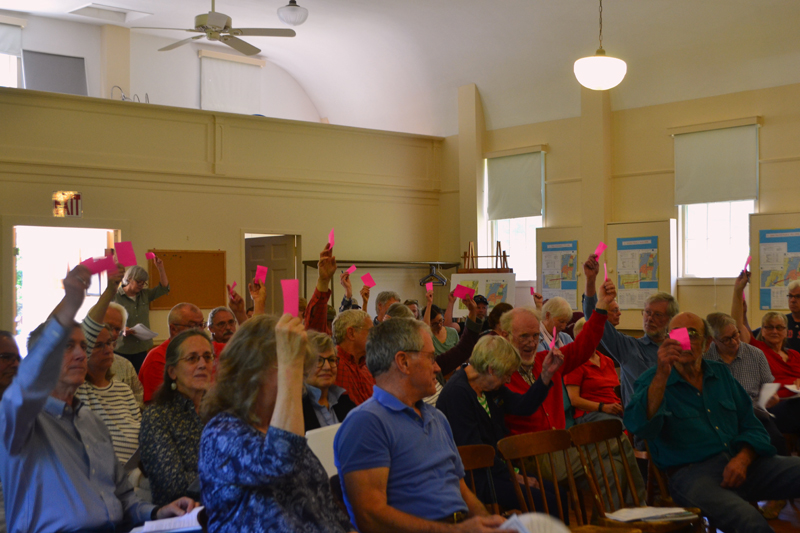 Fifty-nine voters participated in the meeting at the historic town hall. It was a meeting with residents speaking out on issues, a meeting with debate, recognition and appreciation of volunteers, amendments to articles (sometimes more than one), refreshments provided by the local fire department, humor, and, of course, the voters making decisions on what they felt best for their town.

Alna resident Chris Cooper moderated the meeting, keeping order and occasionally inserting his own commentary on an issue in his usual humorous manner, often bringing laughter to the meeting.

Voters approved two articles related to paving and maintenance of town roads after much debate and multiple amendments.

Article 34, regarding $465,000 for the first part of the long-term paving program, was amended twice before approval.

Phase one will include the paving of Doggett Road, Haskell Road, Lord Road, and North End Road, a total of 2.6 miles, according to the article. The work is estimated to cost $314,894, plus the cost of culvert replacements, ditching, and shoulder work, but the road committee and selectmen recommended raising $350,000 for paving and $115,000 for the preparatory work. Any funds remaining will be carried forward for phase two.

William Hopkins moved to amend the article to require a competitive bidding process for all roadwork. The amendment passed.

The approval of the amendment was followed by discussion on how much of each road would be paved.

James Cromwell, chair of the road committee, said only the portions of each road that are already paved will be repaved.

A second amendment, to say only the paved portions of the roads will be repaved and to remove “2.6 miles” from the article because several residents thought it inaccurate, also passed. Article 34 was put before the voters with the two amendments.

Just as Cooper was about to call for a vote on the article, First Selectman George Richardson Jr. asked for guidance from the voters on how to raise the funds necessary to cover the article, should the article pass.

Richardson offered the options of a two-year or three-year loan from First National Bank.

Several voters’ hands went up, at which point Cooper told the voters the issue was not up for discussion. A vote, he said, would not be binding. The selectmen were only asking for the voters’ advice.

Cooper asked the voters to raise their hands for the option they would prefer. The voters favored the three-year option.

An effort to amend another roadwork-related article failed. In Article 32, the road commissioner and selectmen had recommended $117,944.96 for paving “as recommended by the Road Commissioner.” The failed amendment would have changed the wording to require a competitive bidding process.

Article 7, to authorize the selectmen to enter into an agreement with the Westport Island History Committee to use the upstairs of the Wright House to display historical items this summer, pending a future decision about a long-term agreement to use the space, was amended to require that any agreement for five years or more would need another townwide vote.

Article 28, regarding a carry-forward to cover potential legal fees for Leslie Lilly and David Wollins, who prevailed in a lawsuit brought by the town regarding ownership of a section of Baker Road, passed after Richardson said the court had ruled the town would not be responsible for the legal fees. Lilly and Wollins have 30 days to appeal that decision.

Cooper quickly said, “You are pushing the limits of this article,” stopping any further comments on Baker Road from Allan.

After hearing other comments from Allan throughout portions of the meeting, Cooper said to Allan, “You’re a pest.” Allan replied, “I agree.”

Cooper said, “It is an asset to the town to have a certain number of pests at a town meeting, whether you know that or not. I thought I should tell you,” bringing laughter from the voters, including Allan.

Article 29, asking for $88,698 for Westport Island’s share of the Wiscasset Regional Transfer Station’s operating budget, brought Janet Thompson to her feet and to the table where the selectmen were seated to express concern about the transfer station’s decision to stop accepting #1 plastic as of July 1.

“This is a disaster,” she said. “Everything is going into the landfill.” She requested that the town do something about it.

Westport Island Conservation Commission Chair Richard Tucker said the town will work with the selectmen to find a local option for the collection of #1 plastic and invited Thompson to work with them on the issue.

Once voters approve the plan, it will go to the state for its approval, according to Mooney. The draft plan is 500 pages long and will be available on the town website, as the cost to print the document for every voter would be exorbitant.

Before moving to adjourn the meeting, Richardson thanked the voters for attending and for their support. Cooper was thanked for conducting the meeting.

After the motion to adjourn was made and seconded, Cooper didn’t ask those in favor to raise their hands. Instead, he said, “Those in favor of this motion, please stand, do an about-face, and walk out of the building.”

The meeting closed with laughter due to Cooper’s new way of adjourning the meeting.

(Correction: A previous version of this article online and on the front page of the June 27 edition incorrectly reported that Westport Island Road Commissioner Garry Cromwell had completed preparatory work for paving Doggett, Haskell, Lord, and North End roads. The preparatory work had not been completed. The Lincoln County News regrets the error.)