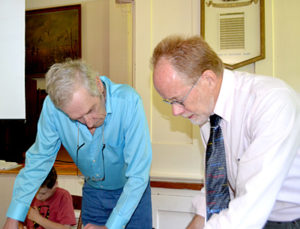 Moderator Chris Cooper, of Alna, told the residents he would conduct the meeting under the rules in the Maine Municipal Association’s moderator’s manual. He conducted the three-hour meeting with a firm hand, patience, and humor.

The voters approved the construction of a sand-and-salt shed and a $50,000 donation to the Kennebec Estuary Land Trust to help purchase 144 acres of land on Squam Creek for a preserve, but not without lengthy discussions on both articles.

The voters had two options on the construction of the sand-and-salt shed. Both articles were recommended by the selectmen, creating confusion for the voters. 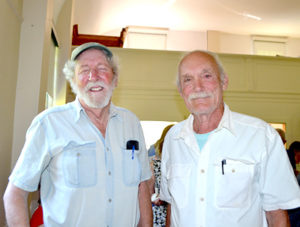 Westport Island residents approved the construction of a sand-and-salt shed at annual town meeting Saturday, June 25. E. Davies Allan (left) and William Hopkins disagreed on the issue, but discussed their differences during a break in the meeting. (Charlotte Boynton photo)

A representative from Pine Tree Engineering, Jonathan DeWick, gave an overhead presentation of the plans for the sand-and-salt shed. The design has been chosen by about 100 other municipalities, according to DeWick.

After the presentation, Westport Island resident and contractor E. Davies Allan said he felt so strongly that the town needs the facility, he would donate the approximately $30,000-$60,000 worth of equipment and site work for the facility.

During discussion of the article, resident William Hopkins made a motion to table the article to a future meeting until more information is provided.

Former Selectman Jack Swanton said, “We have been kicking this can around for 10 years; it is time to move on.”

Allan said he would withdraw his offer if voters tabled the article.

The motion to table the article failed, with only six votes in favor. After further discussion, the article passed with overwhelming support.

Article 6 asked the voters to borrow the entire $300,000, but since article 5 had been approved, article 6 was not necessary. First Selectman George Richardson said he would like to amend article 6 to authorize the selectmen to move forward $25,000 from a reserve account the voters approved at last year’s town meeting to spend on the sand-and-salt shed.

Cooper took a moment to think about the motion to amend the article before saying, “You look like a friendly crowd, so I will allow the amendment.”

The voters approved the article as amended, which increased the amount to $325,000 appropriated to build a sand-and-salt shed, the $300,000 approved in article 5 and the $25,000 moved forward from last year’s vote.

The voters approved funding a pledge of $50,000 to donate to the Kennebec Estuary Land Trust. Several residents spoke for and against the donation.

Ruth Nelson said she is not opposed to the acquisition of the land, but is opposed to the $50,000 donation. She said the land had been on the market for some time, and perhaps the owners of the property could reduce their price.

Nelson also asked for a secret-ballot vote on the article.

Some residents questioned why they had to vote on the article since more than 60 percent of the voters had approved pledging the money June 14. Cooper said the vote on June 14 did not fund the pledge.

Kennebec Estuary Land Trust board member and resident Dennis Dunbar told the voters the land trust is covering most of the cost of the property, which will be preserved for future generations of Westport Islanders and others to enjoy. He also said the owners had decreased the purchase price from $511,000 to $411,000 because it was going to be preserved.

Although a motion for a secret-ballot vote on the article had been made, there was no vote taken on the motion. Cooper apologized for the error and called for a vote.

Westport Island resident Newton Blakesley asked why a vote was necessary, as at a previous town meeting, the voters decided that if a resident asked for a secret ballot, there would be no vote necessary.

The motion to hold a secret-ballot vote on the article to fund the $50,000 pledge toward the purchase of the property failed, 38-32.

The article to fund the $50,000 pledge then passed by a show of hands, 45-20. The moderator asked the voters to hold their cards up until the clerks could count them.

The question of the secret-ballot vote came up again at the closing of the meeting. Just as Cooper was asking for a motion to adjourn, Blakesley said, “May I ask a question?”

Cooper said, “It is highly irregular, but go ahead.”

Blakesley asked what the town could do to allow a secret ballot without having to vote on it.

Cooper said the town should ask an attorney if it would be legal to do that, however, he said, “I would not advise the town to do that because one dissenter could ask for a secret ballot on every article on the warrant.

“But I really don’t care what you do, I more than likely won’t be asked back again anyway,” Cooper said with a chuckle. His words brought laughter from the residents.

Road Commissioner Garry Cromwell made a motion to amend article 29 to raise $25,000 for paving town roads in addition to his recommendation on the warrant to carry a balance of $65,500 forward and transfer $9,500 from a state highway account. The article passed as amended with little discussion. A total of $100,000 will be available for paving town roads.

Deputy Fire Chief Jason Abbott reported the activities of the fire department this past year to the voters, and reminded them of the importance of reporting an emergency immediately. “What happens in the first five minutes determines what happens in the next five hours,” Abbott said.

He also reminded the voters that the fire department will hold its annual chicken barbecue Saturday, July 9, at the town hall, beginning at 5:30 p.m.

As the meeting came to a close, First Selectman George Richardson asked for a moment of silence in memory of Carole Bodmer, the wife of Second Selectman Gerald Bodmer. Carole Bodmer passed away unexpectedly on Father’s Day, June 19.