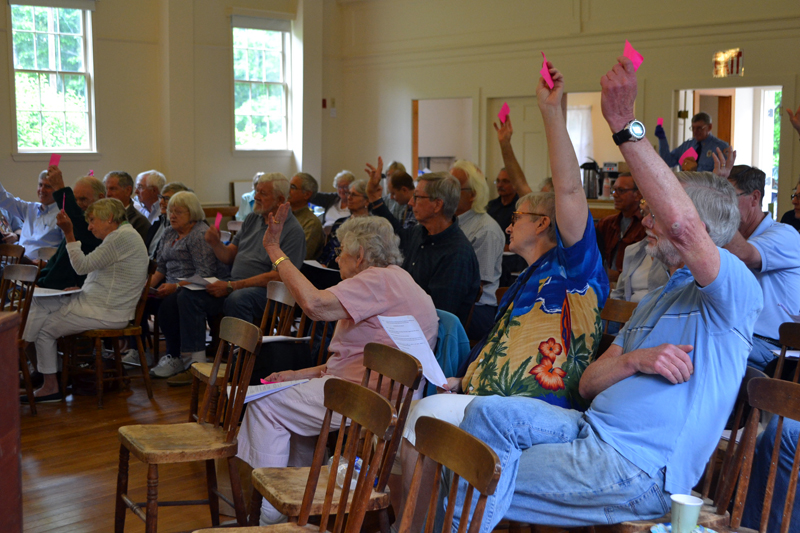 Westport Island will appeal a justice’s decision in a lawsuit against the town and will allow the painting of a mural on the foundation of the sand shed, voters decided at town meeting Saturday, June 23.

The meeting opened with the Pledge of Allegiance, led by Fire Chief Stacey Hutchison. Voters and town officials then took care of business and recognized the efforts of town employees and volunteers. A recess was taken to enjoy the fire department’s famous hot dogs, and the three-hour meeting was interspersed with humor from moderator Chris Cooper.

With 56 registered voters in attendance, the first article approved directed the town to move forward with an appeal to the Maine Supreme Judicial Court on the Baker Road lawsuit brought against the town by Leslie Lilly and David Wollins. There were only three votes in opposition.

The town’s attorney, William Dale, addressed the voters. Dale said the Maine Superior Court justice was wrong in ruling against the town on the ownership of a portion of road, claimed by the couple as their driveway and by the town as part of the town-owned Baker Road.

According to Dale, Baker Road was approved at town meeting in 1785, when Westport Island was part of Edgecomb, and the town has maintained the road over the years.

Dale told the voters he thinks the town has a 75 percent chance of winning an appeal.

Asked why the judge ruled in favor of the Colorado couple, Dale said, “The judge didn’t believe the road was mapped out in 1785, or the road commissioners who said the town had maintained the road over the years.”

Dale said Lilly and Wollins have asked the court for these legal fees, and the decision has not been made yet. He said there is no provision under the law for their request to be granted.

After close to a half-hour of discussion, the voters approved the article overwhelmingly.

Conservation committee Chair Richard Tucker spoke briefly on the town’s cleanup efforts. He said he believes visitors to the island are responsible for the litter on its roads. The litter includes a lot of Marlboro cigarettes and Budweiser beer cans, he said.

Cooper, of Alna, conducted the meeting with a strong hand on the gavel to keep the meeting on track, but he also interjected his quick wit and comments.

The voters made it very clear that they are very pleased with their fire department. They amended the department’s training budget from $1,000 to $2,000 and approved a $16,000 increase in the budget to give $1,000 annual stipends to firefighters who meet certain requirements, and to establish a capital reserve account.

Hutchison thanked retired Fire Chief Robert Mooney for his service to the town and the fire department. “He served during the lean years of the department and did a great job,” Hutchison said.

The voters agreed to allow Bailey Bartlett to paint murals on the west side of the sand and salt shed’s cement foundation. Bartlett told the voters she would maintain the paintings at no cost to the town.

Most of the articles were approved with little to no discussion. The only comment made on the article for the town officers’ salaries, with a 1.75 percent cost-of-living increase for a total of $82,955, was made by the moderator.

“This is the greatest bargain in municipal compensation,” Cooper said before asking for a vote.

The nonprofit Westport Island Helping Hands received authorization to move its food pantry into the basement of the town-owned Wright House. It will share costs for utilities and insurance with the town.

The volunteer-run charity was credited with providing 2,500 gallons of fuel oil to residents last winter and many other deeds of kindness.

Richardson expressed the town’s appreciation to all the volunteers who serve on town committees and to the residents present at the meeting.