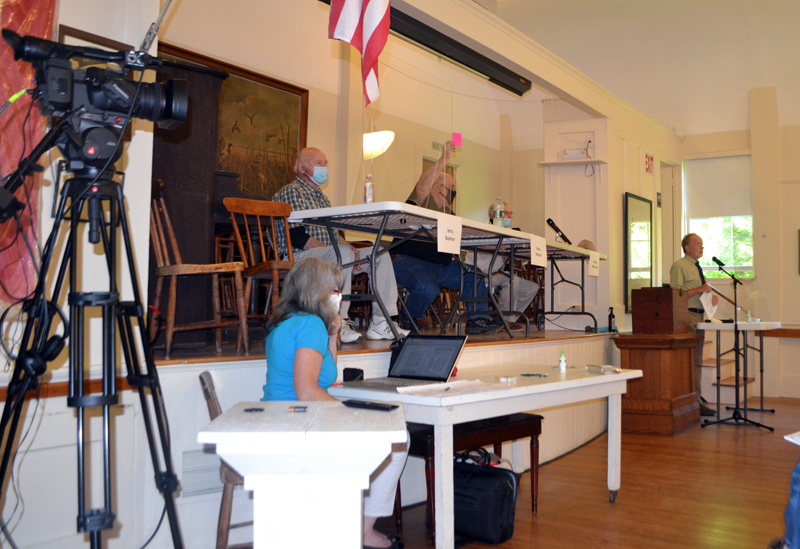 Westport Island Third Selectman Ross Norton raises his card in opposition to accepting a section of North End Road as a town way during annual town meeting at the historic town hall, Saturday, July 18. COVID-19 precautions at the meeting included face masks, Plexiglas barriers in front of the moderator and selectmen, and audiovisual equipment to connect voters at the town hall with those present in the community church next door. (Charlotte Boynton photo)

During the fourth vote on the question in 37 years, Westport Island voters accepted a section of North End Road as a town way during annual town meeting Saturday, July 18.

The setting of the meeting was unusual. Voters gathered in the historic town hall and the community church next door to allow for physical distancing. Audiovisual equipment connected the locations.

Voters approved all articles on the warrant with little discussion and no amendments. Chris Cooper, of Alna, moderated.

Most articles passed without discussion. Only four generated questions from voters before passing with little to no opposition.

Article 6, to accept the section of North End Road, repair it, and maintain it going forward, passed, but not without opposition from Third Selectman Ross Norton.

Norton said the section of road had never been a town road. He said it had previously been a county road, but the town had never accepted it as a town road.

“I have no problem with the town maintaining the portion of road,” Norton said after the meeting, but he opposed the language in the article. 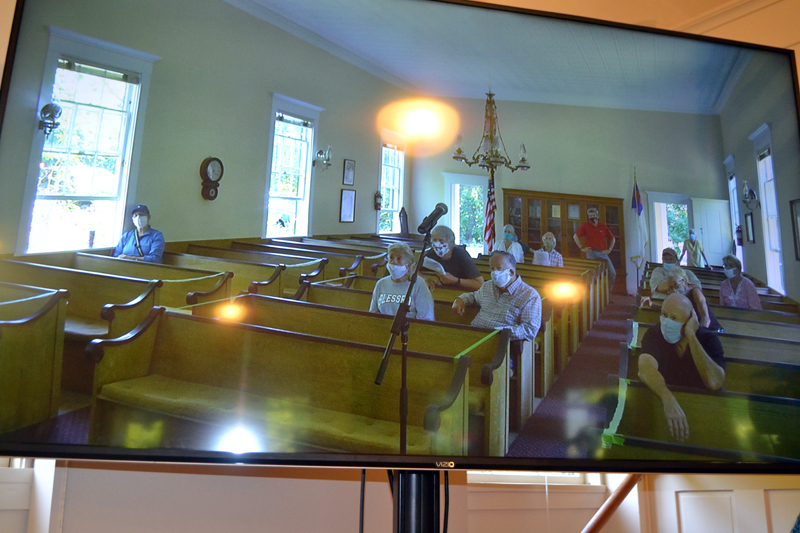 A screen at the historic town hall displays voters in the community church next door during Westport Island’s annual town meeting Saturday, July 18. In a unique approach to physical distancing, audiovisual equipment connected voters in the church with those in the town hall. (Charlotte Boynton photo)

“I did not approve the wording in the warrant article that said it was a town road,” Norton said.

Ralph and Joanna Jacobs, residents of the section of road, have sued the town over the issue.

First Selectman George Richardson Jr. told the voters that if they approved the article, the town would avoid expensive litigation, which it could lose and end up having to maintain the road. He said the cost of the litigation would far exceed the $37,000 the article proposed for reconstruction of the road.

Ralph and Joanna Jacobs had said they would drop the lawsuit if voters approved the article.

“It is up to you to decide,” Richardson told the voters.

The town’s attorney recommended the language of the warrant article. 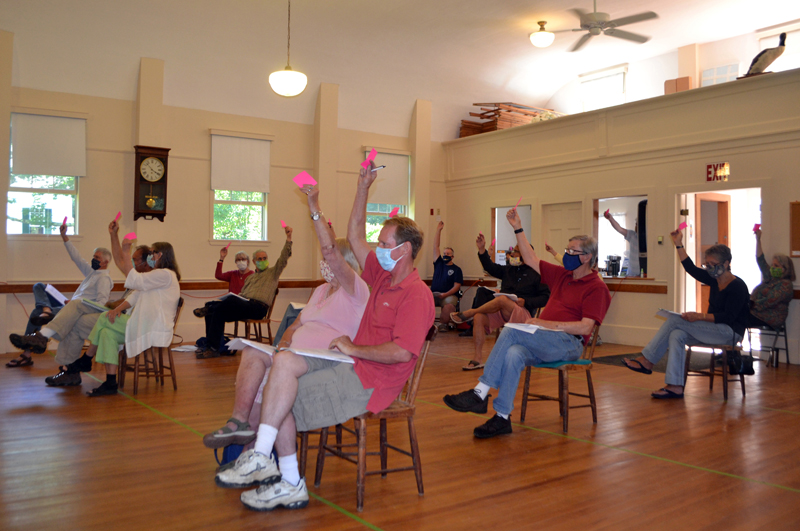 “I am going to listen to our attorney and vote for the article instead of subjecting the town to an expensive lawsuit we could lose,” Richardson said.

Second Selectman Gerald Bodmer told the voters he too was going to listen to the attorney and vote in favor of the article.

Ralph Jacobs spoke briefly on the history of the issue and asked voters to support the article.

Westport Island Fire Chief Stacey Hutchison spoke in favor of the article, saying a well-maintained road would allow emergency vehicles to respond to calls as quickly as possible.

After about 30 minutes of discussion, the article passed overwhelmingly. The Jacobses said after the meeting that they were pleased with the vote.

Ralph Jacobs, a member of the town’s broadband and cable committee, spoke in favor of Article 17, requesting $20,000 for expenses related to expanding broadband internet access on the island.

Ralph Jacobs said only half of the homes on the island have broadband access and the goal of the committee is to expand access throughout the island.

Article 34 requested $144,552 for the second of three annual payments for the first phase of a long-term paving plan, approved at last year’s town meeting.

Residents asked when phase two would begin. James Cromwell, chair of the roads committee, said, “After phase one is paid for next year, phase two should begin in 2022.”

Fifty-three voters attended. All wore face masks and observed physical distancing as they approved 47 articles in about 90 minutes.