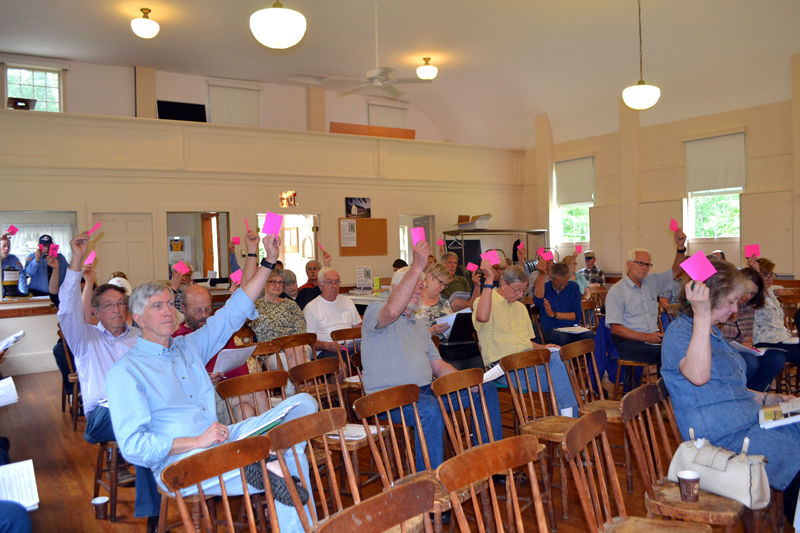 About 50 voters attended Westport Island’s annual town meeting Saturday, June 24. The voters not only took care of the 44 articles on the warrant, they learned the importance of dry hydrants on Westport Island, learned how and when they could change the amount to spend on a particular item, and appeared to have a good time doing so, with humor coming from both sides of the podium.

Chris Cooper, of Alna, moderated the meeting, using a hammer to keep order in lieu of a gavel. He didn’t hesitate to use the hammer when the discussion among voters veered away from the article at hand.

Cooper opened the meeting promptly at 9 a.m., telling the voters some in attendance were hoping the meeting would be over by 11 a.m. “That could be possible, that is, if all the troublemakers stayed home,” Cooper said to laughter.

The voters approved most articles with little to no discussion.

One of the articles that did spark discussion related to the negotiation of the renewal of the cable contract with Time Warner Cable, now Spectrum.

In Article 6, voters considered whether to spend $1,500 for legal fees related to the negotiations. Jason Kates moved to increase the amount to $5,000, but Cooper rejected the motion.

After further discussion, voters approved an amendment to remove the reference to legal fees, then approved the article to spend $1,500 for negotiations.

Article 7, to raise $77,209 for the first of two annual payments for the sand and salt shed, passed without discussion.

Cooper commented on the length of debate about spending $1,500 in comparison to the lack of comment on spending $77,000. “You just can never tell,” he said with a chuckle.

The voters also approved using $17,000 from the paving reserve account to pave the sand and salt shed, as well as an additional $5,000 for engineering oversight of the construction.

Voters amended Article 26 to provide an additional $3,500 in legal fees for the cable contract negotiations. Before the amendment, the article read “To see what sum the town will raise and appropriate for a legal fund to be used on the approval of the selectmen.” The selectmen had recommended $1,500. 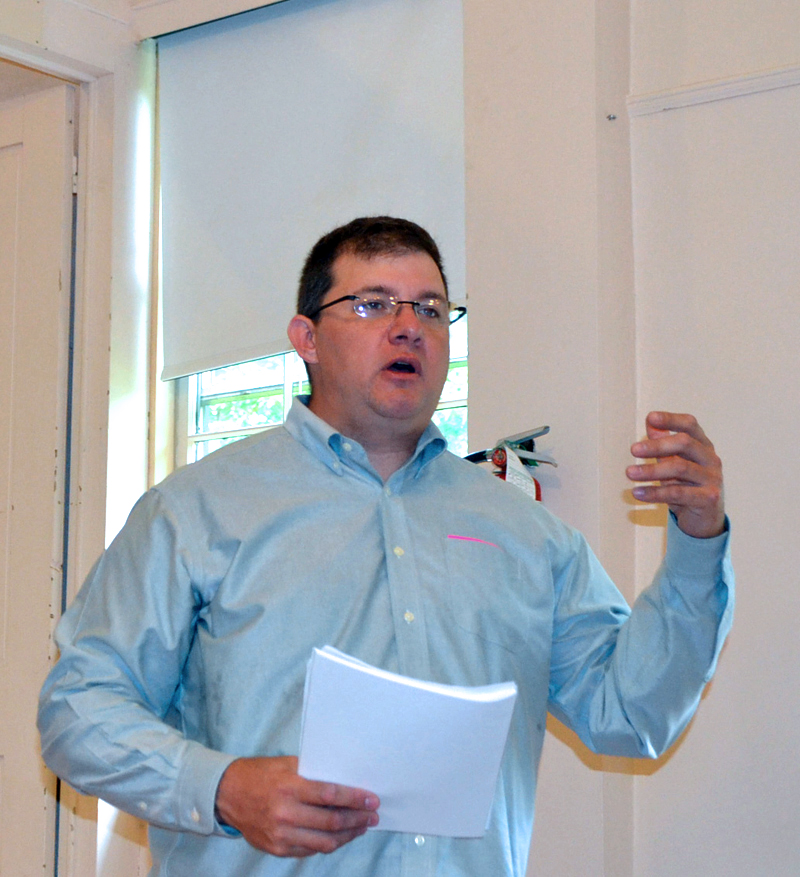 Cooper said that in Article 6, the article included an amount. In Article 26, the amount of money was not written in the body of the article, it was a recommendation of the selectmen. When it is a recommendation, it can be amended either up or down, according to Cooper.

The article was approved as amended.

Resident Ruth Nelson commented on Article 5, to raise $5,870 for the first of 10 annual payments on a $50,000 loan. The town borrowed the money to help the Kennebec Estuary Land Trust purchase a preserve on Squam Creek.

Nelson did not object to the article, but said that in addition to the donation toward the purchase, the land has come off the tax rolls. She suggested that the owners of the land should make a contribution to the town in lieu of taxes.

The funds for winter road maintenance come from excise taxes on vehicles, and voters questioned the amount of excise tax the town brings in with only about 700 year-round residents.

The moderator, again adding some humor, told the residents to keep on buying those high-end new cars to keep that excise tax coming in.

A resident asked who to contact about maintenance needs on a town road.

“Call the road commissioner and be nice,” Cooper said. “If he doesn’t respond to you, you keep calling him, and ride him like a tired donkey.”

The resident said, “I’m good at that.” The comments brought laughter from the voters. 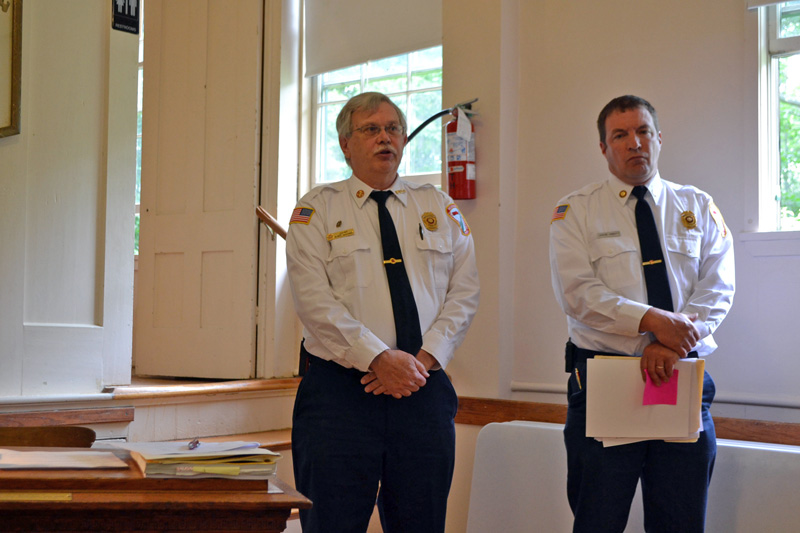 Fire Chief Robert Mooney and Deputy Fire Chief Jason Abbott told voters the department appreciates the support it receives from the town, and the volunteer service of its members.

According to Mooney and Abbott, the department is growing in members, as well as in equipment and training. They said the water sources on the island are an issue for the department, and asked anyone who has a pond on their property to consider allowing the department to install a dry hydrant. Abbott said the department would cover the approximately $2,000 cost.

The fire department will host its annual chicken barbecue at the historic town hall at 5:30 p.m. July 8. One of the highlights, besides the food, is the opportunity to “dunk the chief.”

Voters approved $5,000 for the operation of the historic town hall and $2,000 for the building’s capital expenses account.

“The town meeting is the finest government that exists anywhere on earth,” Cooper said at the meeting’s close, and voters responded with applause.