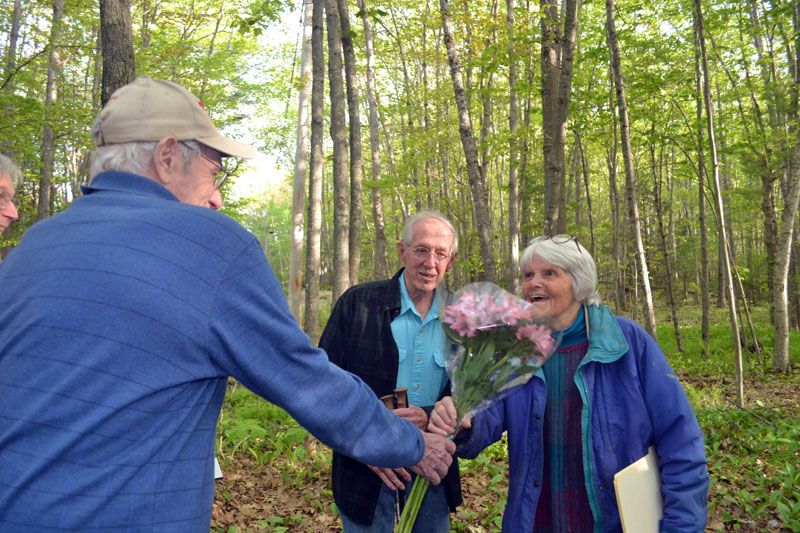 Westport Island First Selectman George Richardson presents flowers to Barbara Thompson at the 50th anniversary of the establishment of Clough Point Preserve, on Monday, May 23. Thompson helped raise funds for the town to purchase the Clough Point property in 1971. (Charlotte Boynton photo)

Westport Island residents gathered at Clough Point Preserve on Monday, May 23 to celebrate the preserve’s 50th anniversary by the unveiling of a plaque to commemorate the occasion.

The celebration included recognition to Valmar and Barbara “Bobsy” Thompson, whose hard work raised the funds to purchase the property over 50 years ago while they lived on Westport Island’s Ferry Road. They now live in Edgecomb.

Valmar Thompson told the group gathered they had often wondered how the preserve had made out over the years and was very pleased to receive an invitation to the anniversary.

The Thompsons were given the honor of unveiling the 50th anniversary plaque. 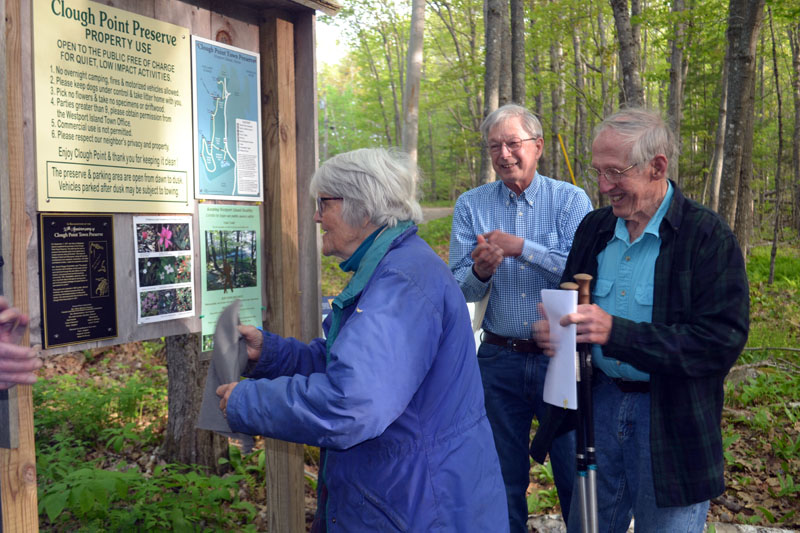 “Thanks to Barbara and Valmar Thompson, who led the newly formed Clough Point Association and spearheaded the fundraising effort,” Dunbar said.

Based on the fundraising ledger kept by Valmar Thompson, the majority of the contributions were between $1 and $25. Residents of Wiscasset, at a special town meeting, voted to contribute $2,700, and a donation from Central Maine Power Co. of $5,000 pushed the fund campaign over the top, according to Dunbar.

According to a newspaper article from March 24, 1971, the voters of Westport approved an article on their town meeting warrant to purchase 1,200 feet of shore front property on Clough Point for a price of $54,000. The article passed with a vote of 54 in favor and 6 opposed.

At the same town meeting, Barbara Thompson, speaking for the conservation commission, requested the voters to allow the commission to apply for federal assistance to purchase the land, the town had already raised $27,000, and the town would receive matching funds. The article to allow the selectmen to accept federal assistance and private funds to purchase the property was approve

First Selectman George Richardson presented Barbara Thompson flowers on behalf of the town and thanked the couple for their service.

“Do I have to share them (the flowers) with Valmar?” Barbara Thompson jokingly asked.

After the celebration, the Thompsons were taken on a tour of the town, including a visit to Ferry Road to see their old home and the Wright Landing Boat Launch faculty.