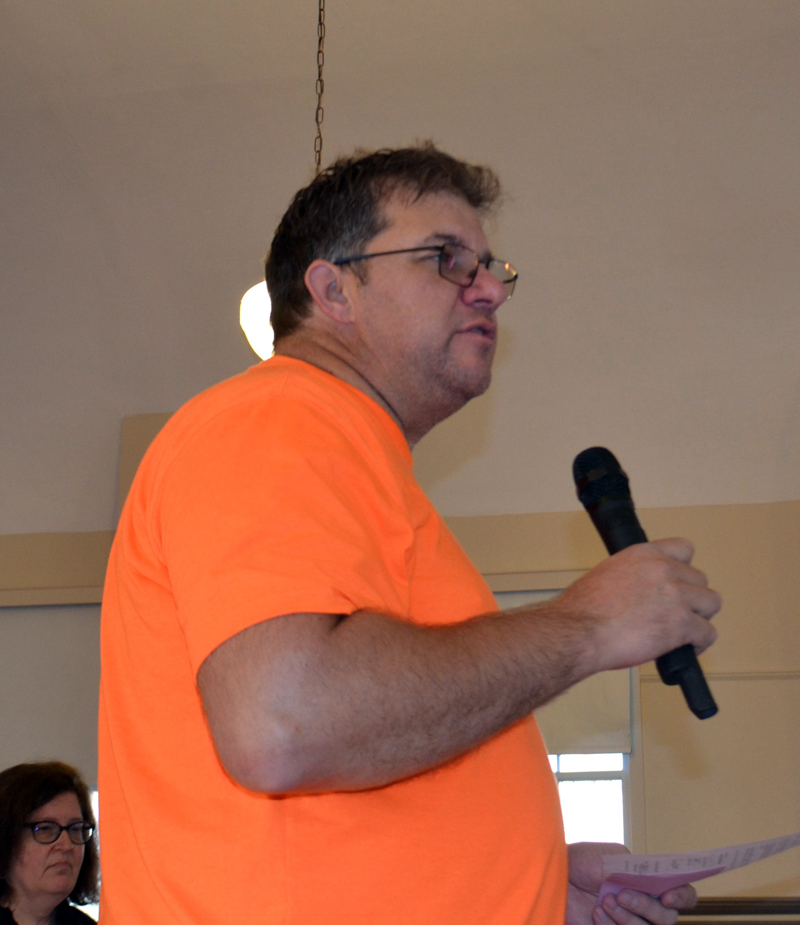 Westport Island Broadband and Cable Committee Chair Jason Kates addresses questions regarding the broadband agreement with Spectrum/Charter Communications to expand service on the island up to 205 homes during a special town meeting, Nov. 13. (Charlotte Boynton photo)

Moderator Chris Cooper, elected to serve as moderator at the Westport special town meeting, Saturday, Nov. 13, described the meeting in three words, “expeditious and unanimous,” when a motion to adjourn was made in just over 30 minutes of it being called to order.

Westport Island residents are known for expressing their feelings strongly on an issue, and often agree to disagree at an open town meeting. The meeting to approve the broadband internet contract with Spectrum/Charter Communications to expand the service to an additional 205 homes on the island and the use of a portion of the American Rescue Plan Act funds had no opposition from the 38 voters attending the special meeting.

Cooper asked voters to approve the reading of Article 2, in an effort to expedite the meeting. He reminded voters, it would take only one vote for the request to fail. He received unanimous support in waiving the reading of the article.

The five articles on the warrant received no opposition votes, only questions asked by Westport Island resident Paul Bonyun for clarification, which were answered by Broadband and Cable Committee Chairman Jason Kates.

Bonyun’s questions included what the difference in speed would be, cost to customers, and cost to the town.

Kates said the increase in speed would depend on what the customer has now; it could be 10 times better than is provided currently, the cost can vary between service with a monthly cost, and the only cost to the town is the $62,651 in matching funds that is being decided in Article 2.

Following the explanation of expanded broadband service, voters approved the following articles with no discussion and no votes in opposition:

Article 2 asked voters for authorization to do the following relating to the town broadband band contract with Charter/Spectrum: Use $62,651 from the broadband grant match account as the town’s share to expand broadband network to 205 homes; to enter into an agreement with Charter Communications; authorize selectmen to repay $42,834 from the ARPA funds to the unappropriated surplus to the extent permitted by ARPA; appropriate $5,000 from the unappropriated surplus to disburse to pay any necessary legal and technical assistance related to the broadband project; and to authorize selectmen to execute any other documents necessary to accomplish the project and to disburse funds from the broadband match account without additional action of the town meeting, this authority to remain in force from year to year until rescinded by a town meeting.

Article 3 asked voters approved to appropriate $680 from the ARPA funds for improvements to the municipal agent’s service counter to promote public safety and access to town officials and members of the public. 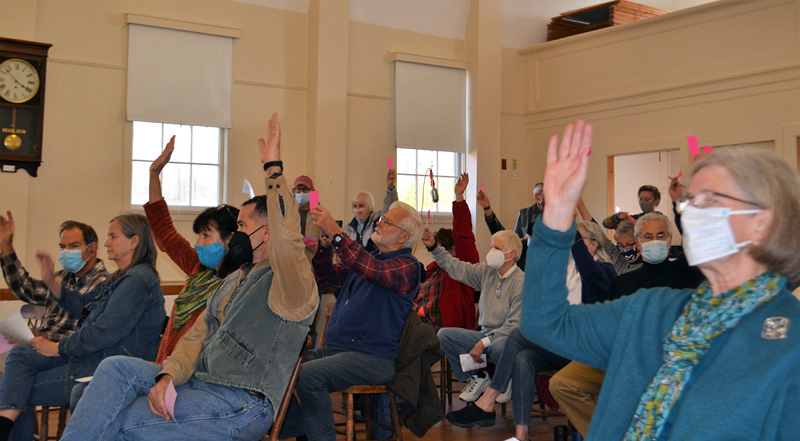 Article 4 asked voters to appropriate $2,000 from the ARPA funds for improvements to the hallway service counter, and equipment at the town office to promote public safety.

Article 5, a motion to adjourn was made, and seconded; before a vote was taken, resident Jack Swanton requested to make a comment. Cooper asked if he wanted his comments to be included in the record of the meeting. Swanton said it did not make a difference,

Swanton took the opportunity to thank the members of the Broadband Committee to bring the opportunity to Westport Island. He said, “They have worked very hard, and deserve our appreciation. It has been 20 years coming, I admit I got burnt out, but they carried on, and I thank you.”

In an email Selectman Jeff Tarbox said the Broadband Committee wants to recognize the work of Allan Doman who took the primary responsibility for developing the list of unserved properties that became the basis for the successful grant application with ConnectMaine last April.

Doman is a summer resident, one of four committee members who already have the Charter/Spectrum broadband service; his services were devoted to those without the service, according to Tarbox.