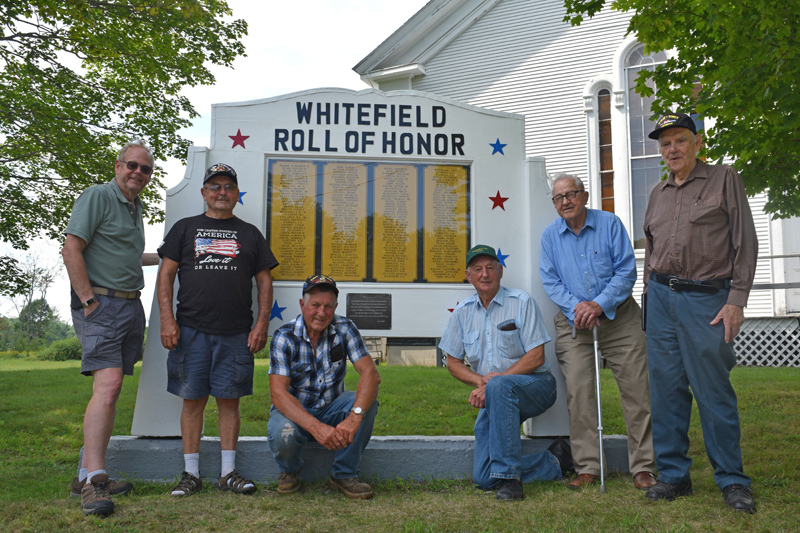 The Whitefield Roll of Honor, a monument to veterans of World War I and World War II, looks brand new after the local senior men’s group completed repairs in early August.

Townspeople built the roll of honor in the mid-1940s to honor all Whitefield veterans to the end of World War II, according to Phil Russell, a member of the senior men’s group. There are 168 names on the roll of honor.

The ownership of the roll of honor is not clear, according to Libby Harmon, an archivist with the Whitefield Historical Society.

It is in the village of Kings Mills, on the lawn of the Sheepscot Valley Community Church at the intersection of Route 194 and Townhouse Road.

“I was at school over there and watched them put this up,” Russell said, pointing to the former Kings Mill School, which is now an apartment building.

The senior men’s group originated in the ’90s. The group gathers weekly at Sheepscot General to drink coffee, talk, and build camaraderie.

A few of the men have family members on the roll of honor, making the upkeep of the monument important to them. One of the members of the group, 93-year-old WWII veteran Albert Boynton, is on the list.

The senior men’s group previously repaired the roll of honor in 2000. At that time, a plaque was installed.

“The Kings Mills Memorial, with its replica of the hand-lettered Roll of Honor of Whitefield men and women who served in World Wars I and II, was restored by the Whitefield Senior Men in grateful recognition of all townspeople, native or newcomer, who bear the burden of war in defense of the United States of America and its vision of liberty and justice for all,” the plaque reads. The date on the plaque is July 4, 2000.

“We took it on the one time to do it, and this year it looked pretty ragged, so we decided we ought to do it again,” Russell said. The men worked on the repairs off and on from mid-July to Aug. 2.

The memorial was completely stripped of its paint and decorations and sanded down. Sherwin-Williams in Augusta donated paint for the project.

The frame for the roll of honor was painted white and the stars lining it were changed from black paint to blue and red. The plywood lettering that read “Whitefield Roll of Honor” was replaced with aluminum cutouts.

New flashing was installed around the edge of the monument to keep water from seeping between the two panels of wood that make up the monument.

A sheet of glass that protected the list of veterans’ names was changed out for a strong, clear plastic.

Most of the materials were donated, with some paid for by Bob Gilman, a member of the group. Russell is thinking of starting a collection to reimburse him.

“He deserves a lot of credit, as well as Keith Sanborn,” Russell said.

“There are a lot of people in the senior men’s group, but it’s a small project and there really wasn’t a lot of room around (the memorial) for a whole group of people. I just asked for volunteers,” Russell said.

Four of the men from the group did most of the physical labor: Sandy Waters, Gilman, Sanborn, and Russell.