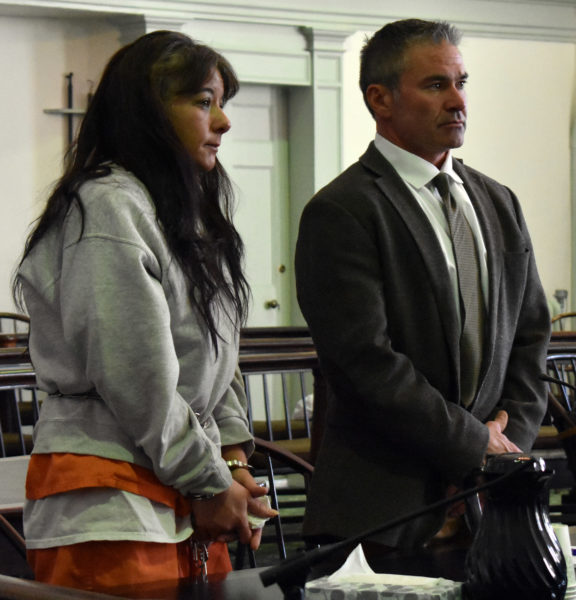 Shawna L. Gatto stands at the defense table with her attorney, Philip S. Cohen, during a hearing at the Lincoln County Courthouse in Wiscasset on Friday, Dec. 15. Gatto faces a charge of murder in connection with the death of her fiance’s 4-year-old granddaughter Friday, Dec. 8. (J.W. Oliver photo)

Among her injuries, Kendall Chick sustained “significant blunt-force trauma to the head” in addition to the blunt-force injury to the abdomen the Maine Chief Medical Examiner’s Office has identified as the cause of death, according to an affidavit by Maine State Police Detective Jonathan Heimbach.

Shawna Lyn Gatto, 43, of Wiscasset, faces a charge of murder in connection with Chick’s death. Chick lived with her grandfather, Stephen Hood, 53, and Gatto, Hood’s fiancee and Chick’s primary caregiver, at 19 Crickets Lane in Wiscasset.

The Maine Department of Health and Human Services placed Chick in the home in January 2017, according to Heimbach’s affidavit. The affidavit does not give a reason for the placement or identify Chick’s parents.

Gatto denied causing the injuries, according to the affidavit. She made her initial appearance at the Lincoln County Courthouse in Wiscasset the morning of Friday, Dec. 15.

Hood called 911 at 4:30 p.m., Friday, Dec. 8, according to the affidavit. He told a dispatcher Chick was unresponsive and he was attempting CPR.

The Wiscasset Ambulance Service arrived about six minutes after Hood placed the call. Chick was not breathing, did not have a pulse, and was pale and cold to the touch, according to the affidavit. An ambulance crew transported her to Mid Coast Hospital in Brunswick, where she was pronounced dead at 5:43 p.m.

Hood, Gatto, and Gatto’s biological grandchildren, ages 4 and 9 months, were present at the time of the call, according to the affidavit.

On Sunday, Dec. 10, Maine Chief Medical Examiner Dr. Mark Flomenbaum conducted an autopsy. The autopsy revealed that Chick died from a blunt-force injury to the abdomen, which caused “lacerations of her pancreas and mesocolon and gastrocolonic membranes,” resulting in death within one to 12 hours, according to the affidavit.

“Further revealed were multiple contusions and lacerations of varying ages to the head, neck, and all four extremities,” Heimbach said in the affidavit. “Further, microscopic examination of the thymus gland revealed chronic physiological stress in addition to the recent injuries stated above.” Flomenbaum ruled the manner of death to be homicide.

Both Flomenbaum and ambulance personnel said Chick had injuries “from which bleeding would be expected,” Heimbach said. “Emergency medical personnel specifically reported a laceration on (Chick’s) chin appeared to be fresh but did not have blood present.”

With a search warrant, Maine State Police Evidence Recovery Team members found blood stains on Chick’s bed, on the bathtub, on paper towels in a plastic bag in the same bathroom, on a towel in a laundry hamper in the kitchen, and near a round dent in a wall of Chick’s bedroom, “which appears consistent with the size of (Chick’s) head,” Heimbach said. Each item tested “presumptive positive” for blood, as did a sponge in the bathtub.

“In sum, there is physical evidence present indicative of trauma and subsequent cleanup of what has tested presumptive positive for blood,” Heimbach said.

During an interview with another detective, Gatto said she had been home alone with the three children all day Friday, with the exception of a couple of brief visits from her 19-year-old son, and had been the only person alone with Chick. She said Chick had not sustained any injuries that day.

She told the detective Chick had thrown up and “messed herself,” so she put her in the bathtub to clean her up. She said Chick was fine when she left to get her a drink in the kitchen, a few feet away, and she returned to find her unresponsive. 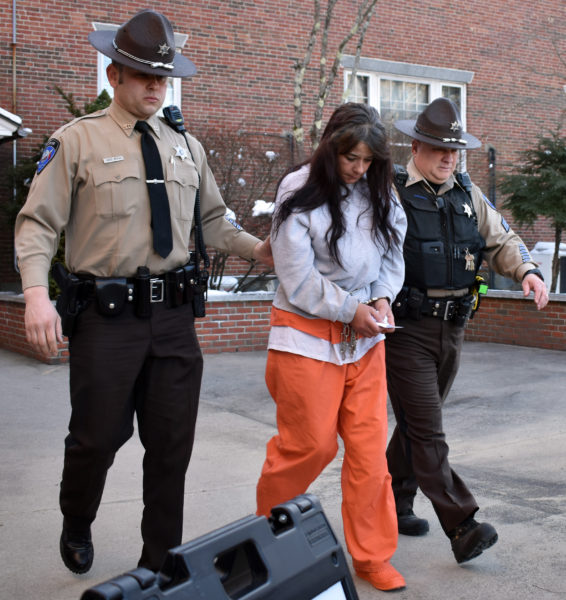 Gatto “denied causing the injuries” to Chick, Heimbach said. She also said neither Hood nor her 4-year-old grandson would have harmed Chick.

Hood told police he arrived home from his job at Bath Iron Works at 3:30 p.m. He worked in the bedroom and went outside around dusk. He did not see Chick until Gatto told him she was unresponsive.

Gatto’s account of the incident is “contradicted by both the physical evidence and the medical findings” of Flomenbaum, Heimbach said.

In the conclusion of the affidavit, Heimbach said he “has probable cause to believe (Chick) died as the result of the injuries inflicted by (Gatto) either knowingly or by conduct manifesting a depraved indifference to the value of human life.”

Detectives arrested Gatto at home just before 6 p.m., Thursday, Dec. 14, according to a press release from Maine Department of Public Safety spokesman Stephen McCausland. She is being held without bail at Two Bridges Regional Jail in Wiscasset.

During the five-minute court hearing Friday morning, the sides agreed that Gatto would continue to be held without bail until the defense requests a hearing on the matter.

Gatto appeared in a jail-issue sweatshirt over an orange jumpsuit, with her hands in shackles. She did not speak during the hearing except in response to a question from Maine Superior Court Justice William R. Stokes.

Stokes explained the charge and read the formal complaint against Gatto. “Do you understand the charge?” he said.

Waldoboro attorney Philip S. Cohen is representing Gatto. He is requesting the appointment of a co-counsel, Camden attorney Jeremy Pratt.

Outside the courthouse, Cohen said he would comment in the future after he has more time to review the case.

The murder would be the first in Lincoln County since a double homicide-suicide in Boothbay Harbor in July 2015.

In Maine, murder carries a maximum penalty of life in prison without the possibility of parole.

In addition to the Maine State Police, the Maine Chief Medical Examiner’s Office, and the Maine Attorney General’s Office, the Lincoln County Sheriff’s Office and the Wiscasset Police Department have been involved in the investigation.