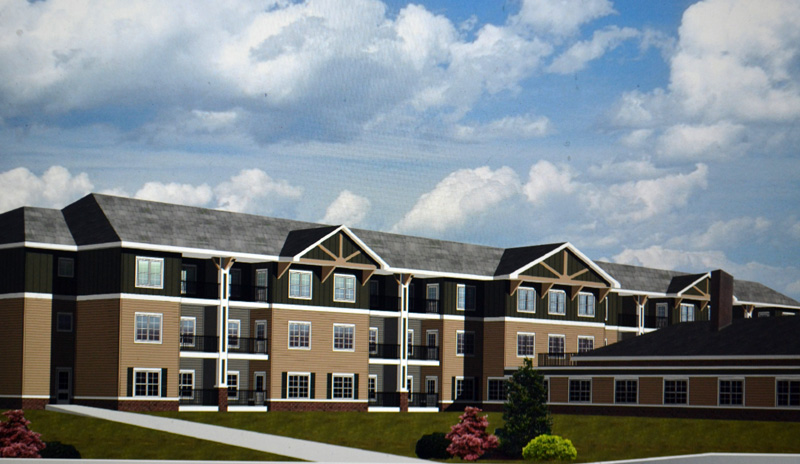 A rendering of the senior living facility proposed for the former Wiscasset Primary School. The Wiscasset Planning Board approved the application at its meeting on Monday, Sept. 12, with the condition that a sewer issue is resolved before it moves forward. (Courtesy image)

After a public hearing, the Wiscasset Planning Board approved an application to redevelop the Wiscasset Primary School at 146 Gardiner Road into a senior housing facility operated by Optimus Senior Living on Monday, Sept. 12.

The project, first announced in November 2021, will consist of approximately 100 living units, which will be a combination of independent living, assisted living, and memory care units, in a 96,000-square-foot facility, according to a press release from the town.

At a special town meeting on Dec. 7, Wiscasset voters approved an article to designate a tax increment financing district for the property.

At the planning board’s Sept. 12 meeting, Eric Dube, of Trillium Engineering, outlined the plans, which includes the construction of a three-story building as well as the repurposing of the existing buildings at the former primary school as much as possible. The proposed site will have three parking lots looping around the complete site.

Planning Board Member Peter McRae asked if it had been determined the current pumping station supporting the site would be capable of supporting the proposed facility.

Optimus Senior Living owner Fred Mielke said that while this has not been determined yet, he has had discussions with Robert Lalli, superintendent of the town’s sewer system. Mielke added that the pumping station supporting the site is at 90% capacity, and may need to be replaced to support the proposed project.

Planning board member Al Cohen, acting as chairman of the board in Karl Olson’s absence, asked if Mielke would be willing to take care of the cost of new pumping station. Mielke said he would be willing to give $100,000-200,000 for the replacement and is even willing to pay early to give the town plenty of time for it to be done because the facility would not be using it until 2024.

After closing the public hearing, Cohen made a motion to approve the application to allow the project to move forward with the condition that the sewer issue must be resolved. The motion passed with no opposition.

Wiscasset closed the school in 2015 and it has been unoccupied since. JSJ Holdings LLC purchased the building in January 2017.

According to a press release from the town, the JSJ Holdings reached a memorandum of understanding with Wiscasset Senior Living LLC to develop the property into senior housing in November.

In other business, the planning board scheduled a public hearing for its next meeting regarding an application from Wiscasset Napa Auto Parts owner Vernon Brewer. Brewer is proposing to build a 40-foot-by-90-foot addition to the existing store at 693 Bath Road to be used as a warehouse.

According to the application, the plan is to begin construction this fall with completion by the spring.

The Wiscasset Planning Board will next meet at 7 p.m. on Monday, Sept. 26.