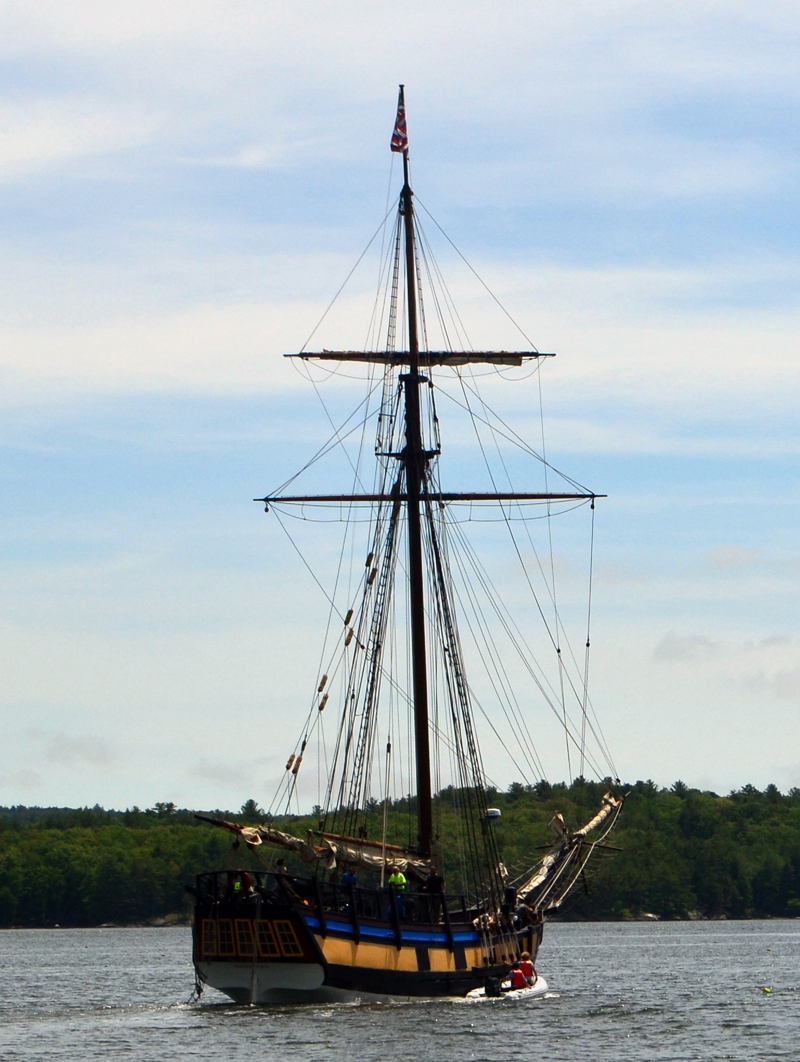 Several people gathered at the Wiscasset waterfront on Wednesday, June 19 to bid farewell to the Providence and its crew. The Providence, built in 1976, is a replica of a Continental Navy sloop once commanded by John Paul Jones. The vessel has been docked at Wiscasset Harbor for repairs since September 2018.

The reproduction of the Providence was built during America’s bicentennial celebration in 1976. It has appeared at several tall ship celebrations and in movies, including two of the “Pirates of the Caribbean” films.

During a severe winter storm in February 2015, while in storage at Newport Shipyard in Rhode Island, the sloop was badly damaged. In 2017, the sloop was purchased by the Tall Ship Providence Foundation. The foundation set out to restore the ship to its former glory and make it the centerpiece of a new maritime museum in Alexandria, Va.

The Wiscasset Board of Selectmen voted in July 2018 to allow the vessel to tie up at a town dock for repairs.

The proclamation recognized Wiscasset for providing warm hospitality and the finest woodworkers and carpenters, as well as generous support for both the ship and the restoration crew.

Sassin said the foundation is grateful for the support of the Wiscasset community.

“While we are looking forward to getting underway, and bringing the ship to Alexandria, we will always consider Wiscasset our second port,” she said.

Wiscasset Selectman Katharine Martin-Savage presented a “certificate of farewell” on behalf of the town.

“To the crew of the Providence, as they set sail from Wiscasset Harbor, on this 19th day of June, 2019, the town of Wiscasset thanks you for your visit to our town and wishes you fair winds and following seas,” Martin-Savage read.

The Providence crew members pulled up the ship’s anchors and headed out of Wiscasset Harbor to applause from the folks at the pier and to the music of Mike Waters, of Dresden, who gave a salute on his British cavalry bugle, playing “To the Color” and other appropriate tunes.

The Providence made a brief stop in Newport, R.I. for a private event before proceeding to Alexandria.

According to Diane West, director of programs and communications at the Tall Ship Providence Foundation, the vessel will receive a special welcome when it arrives in Alexandria late Monday, July 1.

The Providence is expected to arrive just before midnight. The arms of the Woodrow Wilson Memorial Bridge will be raised and the Providence will sail into its new port through a water arch provided by local fireboats.

The vessel will be illuminated with spotlights and outlined with white lights. “It will be a gorgeous sight for the Alexandrians who gather to watch,” West said in an email.

The Providence is expected to open to the public for tours July 9, according to Sassin.