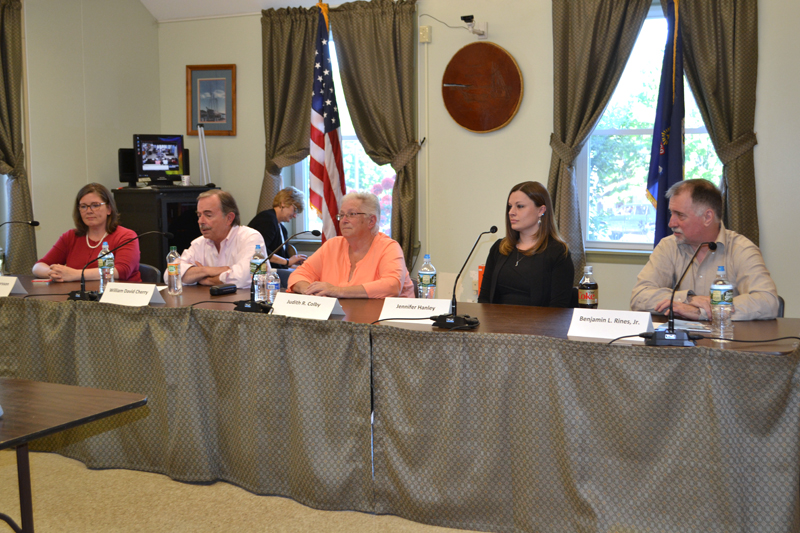 The candidates for the Wiscasset Board of Selectmen participate in a forum at the municipal building Thursday, May 31. From left: Kim Andersson, David Cherry, Judy Colby, Jennifer Hanley, and Benjamin Rines Jr. (Charlotte Boynton photo)

The five candidates for three seats on the Wiscasset Board of Selectmen fielded questions about the Maine Department of Transportation’s downtown project, the future of Wiscasset Middle High School, and several other town issues during a forum at the municipal building Thursday, May 31.

The Lincoln County News hosted the forum and J.W. Oliver, editor of the newspaper, was the moderator.  About 30 people attended the forum, which was also broadcast live via the town’s YouTube channel.

The need for economic development, the need to have a stable tax rate, and the need for a town planner were among the issues the candidates discussed the most.

The candidates also fielded questions from Oliver and from the public about the role of the selectmen in the DOT project and how to address the concerns of downtown businesses; the most important issue in the town; the position of town planner; a proposal to outsource ambulance service; whether they would support the privatization of the Wiscasset Community Center; what, if anything, the selectmen can do to encourage the removal of nuclear waste from the Maine Yankee site; and whether they would support sending students to other high schools due to low enrollment in grades nine through 12.

Regarding the DOT project, the candidates agreed that the project is moving forward and the selectmen should work with the DOT to make the transition as easy as possible, and perhaps schedule a meeting with Gov. Paul LePage to discuss lingering concerns about the project.

Colby said the most important issue before the town is the need for economic development.

Andersson agreed, naming the most important issues as economic development and the tax burden.

Candidate David Cherry also agreed and said an economic development officer – a renaming of the position of town planner – would help.

Rines said the selectmen should work to stabilize the tax rate.

Andersson, Cherry, Colby, and Hanley said they would support restoring the planner’s position, because it is critical to facilitate economic growth. Rines said that in his opinion, the town manager should be able to handle the work of a planner.

The question of whether to outsource ambulance service received mixed views. The town has solicited a proposal from the Damariscotta-based nonprofit Central Lincoln County Ambulance Service Inc. to serve Wiscasset.

However, all candidates said they support the Wiscasset Ambulance Service budget on the warrant for the annual town meeting by referendum Tuesday, June 12.

Rines said it is the selectmen’s responsibility to look for potential cost savings, and outsourcing the ambulance service could provide savings.

Colby said further research should be done before any decisions are made, and when the time comes for a  decision to be made, it should be made by the voters. Hanley said she supports the Wiscasset Ambulance Service.

An audience member’s suggestion about privatization of the community center was not popular with the candidates, although they all agreed that the center should be closer to self-sustaining.

Andersson said the Wiscasset Parks and Recreation Department, which operates the community center, provides activities for children who do not have another place to go for recreation, and sponsors most of the town’s events, like the Halloween parade, the Fourth of July festivities, and the annual Christmas tree-lighting.

The candidates said there is not much the selectmen can do to bring about the removal of the spent fuel from the Maine Yankee site.

As to the low population of Wiscasset students in grades nine through 12 and the possibility of sending high school students elsewhere, the candidates brought some mixed positions on the issue.

Andersson said that if the town wants economic growth and wants to have more young people move to town and buy homes, one thing new young homeowners look for is a good school system, and in her opinion, the town has a good system and should keep its high school.

Rines, a graduate of Wiscasset High School, said that before making a decision to close the high school, he would want public input from the townspeople.

She said it would save the town money, but agreed that more research on the issue should be done before it is brought to the voters. Cherry agreed that voters would need more information before making that decision.

The candidates were asked what they would propose to bring younger people to Wiscasset. Rines suggested, to laughter from the group, “Justin Bieber.” Rines went on to say that attracting young people has been a question for the past 50 years, and he doesn’t believe there is an answer.

Andersson said, “We have to sell our town. We need to tell people that it is a wonderful, safe place to live and to raise children.”

Cherry said, “We need to offer them jobs, cultural and recreational opportunities.”

Colby said, “Maine is a place that people come to retire to.” Colby also said the town needs economic development, a place that will offer a good education, jobs, and to get back to family values.

Hanley said she was not certain what would bring young people to Wiscasset.

Of how the candidates would work to stabilize taxes, Andersson said the selectmen should work with the Wiscasset School Committee to keep the school portion of the tax rate down.

Rines said the selectmen need to keep a close eye on the budget. Cherry said the town should come up with a plan and stick to it. Hanley suggested developing a program that would help people pay their taxes by doing work for the town. Colby focused on economic development. “We need more businesses to improve our tax base,” she said.

A recording of the forum is available at https://bit.ly/2LnbF81.

Kim Andersson believes Wiscasset’s best years are yet to come if everyone works together to make it happen.

“We need to connect the dots and bring people together,” she said at the candidates forum. “Our volunteers that serve on the various committees are the town’s greatest asset.”

Andersson sits on the Wiscasset Budget Committee. She feels that the town needs to focus on increasing its revenue, not cutting services. She served three years as a member of the RSU 12 Board of Directors and is a regular at most meetings of the selectmen, the school committee, and the advisory committee on the downtown project. She often speaks at meetings to voice her opinion on issues.

Andersson and her husband, Mikael Andersson, have two children and have lived in Wiscasset since 2005. She is a teacher at Wiscasset Middle High School, and her husband is the chef at Lincoln Academy.

David Cherry said Rines is the only candidate who is a native of Wiscasset. “You were born and raised here and you decided to stay here. We chose to live here,” he said to Rines.

Cherry said he and his partner traveled from California looking for a place to call home about 15 years ago. When they arrived in Wiscasset, they found the people so friendly that they decided to make it their home.

Cherry established the Miss Kitty’s Cakes business on Route 1 in Wiscasset and is an assistant librarian at Wiscasset Public Library.

Cherry has a master’s degree in international affairs from Columbia University and previously served as a selectman for one two-year term.

Although Judy Colby is not a native of Wiscasset, her husband, Carroll, is. He is a 1981 graduate of Wiscasset High School. Colby recently retired from the Wiscasset School Department as a bus driver. She has a degree in accounting and has worked as a substitute teacher.

Colby is completing her third term as a selectman, and has served as chair for the past two years. She believes a selectman represents all taxpayers, and should make decisions based on what is best for all residents.

She, along with Andersson, would like to see communications between the school committee and the selectmen improve. The school budget has the biggest impact on the town’s mil rate, and the two groups should work together, Colby said.

Colby said she takes her role as a selectman very seriously and would like to continue her work.

“Wiscasset is a wonderful town,” Colby said. “It has everything a person would ever want in a town. It has excellent services, a beautiful harbor, good schools, and, most importantly, wonderful, caring people.”

Jennifer Hanley is a young business owner in Wiscasset and a legal assistant at a law firm in Damariscotta. She said she is seeking to get her foot in the door of town politics with the goal of making a difference and bringing new ideas to the town that are beneficial for everyone.

She said she does not have experience in town government, but everyone has to start somewhere and she is ready to learn. She has lived in Wiscasset for 15 years. She is a mother of two daughters and three foster children. She manages her own cleaning business during the summer, with 65 clients and 18 employees.

“I like to stay busy and learn new things, and meet new people, ” Hanley said. “I have never had experience with any job I have ever had. You learn as you go because you want to. I would love the opportunity to be a selectman to make a difference in Wiscasset. I also believe that change is possible, and change is sometimes good.”

Benjamin Rines Jr. began serving as a Wiscasset selectman in 1976, with Lawrence Gordon and the late George Flanders. Rines also served two terms in the State Legislature from 1996-2000.

He retired from Bath Iron Works after 33 years as welder, is a 1971 graduate of Wiscasset High School, and attended his 47th alumni banquet Saturday, June 2.

Rines said he is confident that Wiscasset has a bright future, but the townspeople must work together. The town must work to stabilize taxes to allow people to afford to live there.

“The selectmen must continue to keep a close eye on the budget, and look for savings where ever they can be found,” Rines said.

“Being a selectman is a challenge, but is something that I have always enjoyed,” he said.