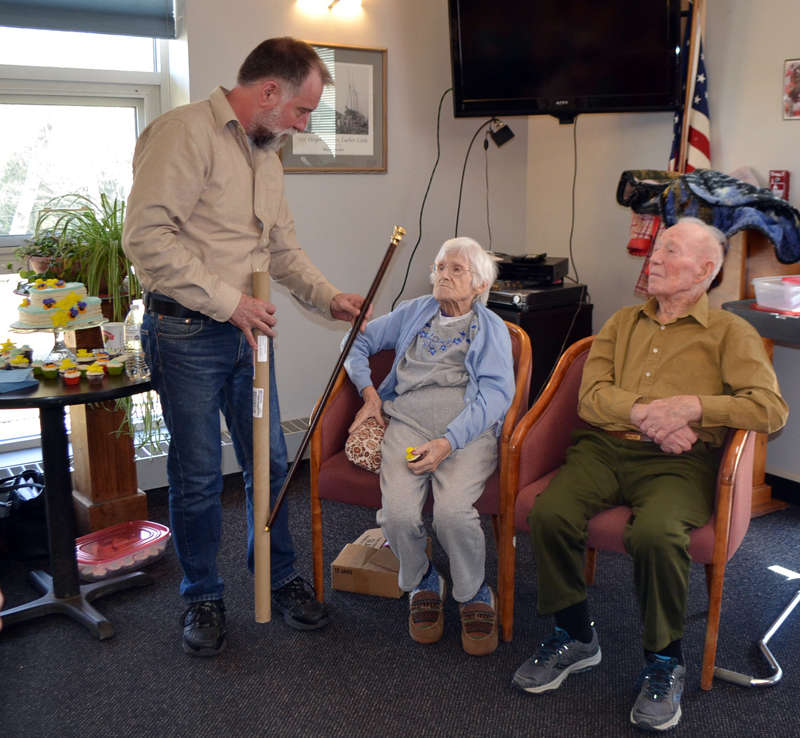 Wiscasset Selectman Benjamin Rines, Jr. (standing), presents the Boston Post Cane to Ruth Applin, who celebrated her 100th birthday Easter Sunday, during an open house at the Wiscasset Community Center. Seated next to Ruth is her 99 year old brother Arthur Jones, who is also the recipient of the Boston Post Cane in the town of Nobleboro. (Charlotte Boynton photo)

Residents of Wiscasset and surrounding towns turned out in force to celebrate the 100th birthday of Ruth Applin on Saturday, April 15.

A resident of Wiscasset for about 95 years, Applin still lives in the Churchill Street house where she grew up, got married, and raised her five children.

Applin’s family hosted an open house at the Wiscasset Community Center to honor her. Five generations of family members and many other people of all ages attended the celebration.

The state of Maine, the town of Wiscasset, and the American Legion Auxiliary honored Applin with presentations during the celebration.

She sat quietly throughout the afternoon, greeting old friends and meeting new ones with a smile and sometimes a hug.

When state Rep. Jeff Hanley presented Applin with a flag that flew over the State House, she placed her hand on the flag and said, “It is beautiful.”

Wiscasset American Legion Auxiliary Secretary Diane Munsey presented a 70-year membership certificate and a 100-year pin, denoting the upcoming 100th anniversary of the American Legion in 2018, along with a card signed by members of the auxiliary’s third district, which consists of Knox, Lincoln, and Sagadahoc counties.

Wiscasset Selectman Benjamin Rines, Jr., who said he has known Applin all of his life, presented her the town’s Boston Post Cane. In presenting the cane, Rines said, “Unless there is someone here that can prove they are older than this lady, I will present this cane.” 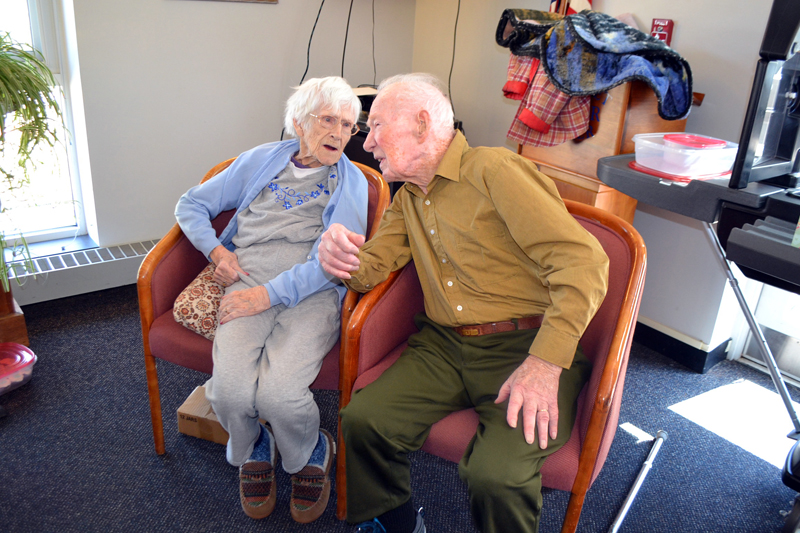 Hearing none, he said, “On behalf of the selectmen, the town of Wiscasset, and its inhabitants, I present you the Boston Post Cane.” She took the cane and kept it by her side during the two-hour event.

Ron Leeman, of Forgotten Recipes, gave Applin a case of assorted jams, which she accepted with a big smile.

Ruth was joined by her brother, Arthur Jones, 99, at the front of the room. Jones holds Nobleboro’s Boston Post Cane. He celebrated his 99th birthday April 3.

According to family members, Ruth moved to Wiscasset when she was 5 years old to live with her aunt and uncle, Harriet and John Jackson. She was the third generation of her family to graduate from Wiscasset Academy, the predecessor to Wiscasset Middle High School, after her grandmother, Mary Sears Jackson, and her mother, Ruth Merle Jones. Applin graduated in 1935 and has never missed a Wiscasset High School alumni banquet. She plans to attend the 2017 alumni banquet next month.

Ruth married Robert Applin on Dec. 26, 1940, at her home on Churchill Street. They spent their honeymoon in Belfast. The couple met in the late 1930s. Robert joined the U.S. Navy prior to the beginning of World War II. While he was home on furlough in 1940, the couple decided to get married. He remained in the military until the war ended.

Ruth became a widow March 8, 1983. After the death of her husband of 43 years, she continued to serve veterans of all wars through volunteer work, and until recently, supported the auxiliary craft shows by donating a variety of handmade crafts for sale to support auxiliary programs. 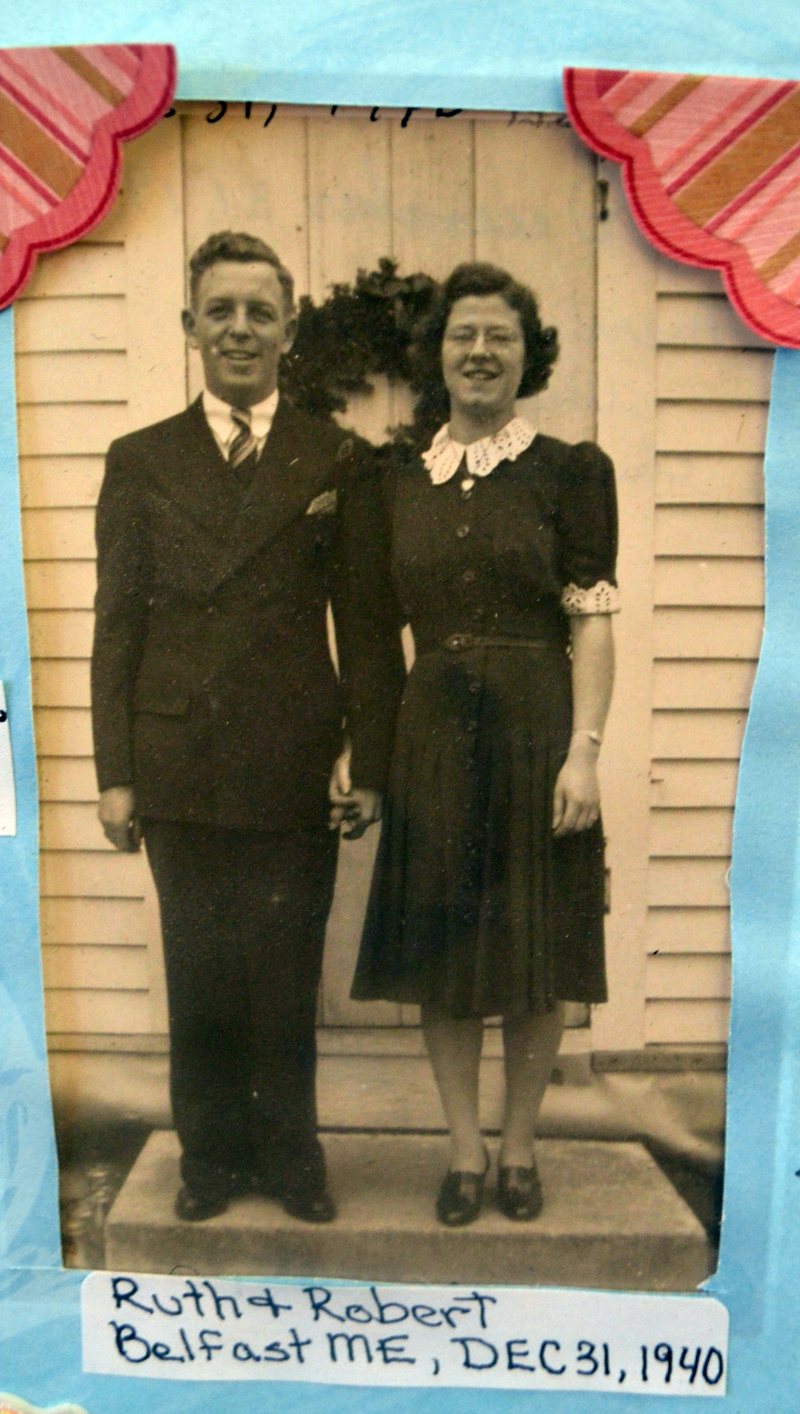 A photo of Ruth Applin and her husband, Robert, on Dec. 31, 1940, during their honeymoon in Belfast. The photo was one of many of Applin’s life on display during her 100th birthday celebration.

Every Memorial Day and Veterans Day, Applin attends the veterans service at the town’s veterans monument, regardless of the weather. When she could no longer drive herself to the event, her children started bringing her.

Applin has served as grand marshal of Wiscasset’s Fourth of July parade twice, and has received recognition from the American Legion for her service to the community.

The open house was attended by some who have known Applin for many years, such as Austin Lincoln, 91, of Edgecomb, who said he has known Ruth “forever.” Others said they did not know her personally, but had heard about her and wanted to come and share the time with a woman who has lived for 100 years.

The room was full of items documenting the history of Ruth’s life: photos of her early years, her graduation, her honeymoon, and her children when they were young, and several newspaper articles about her many good deeds through the years.

Ruth is a longtime member of Wiscasset’s First Congregational Church. On Easter Sunday, April 16, the anniversary of her birth 100 years ago, she began her day by attending the Easter morning service at her church.