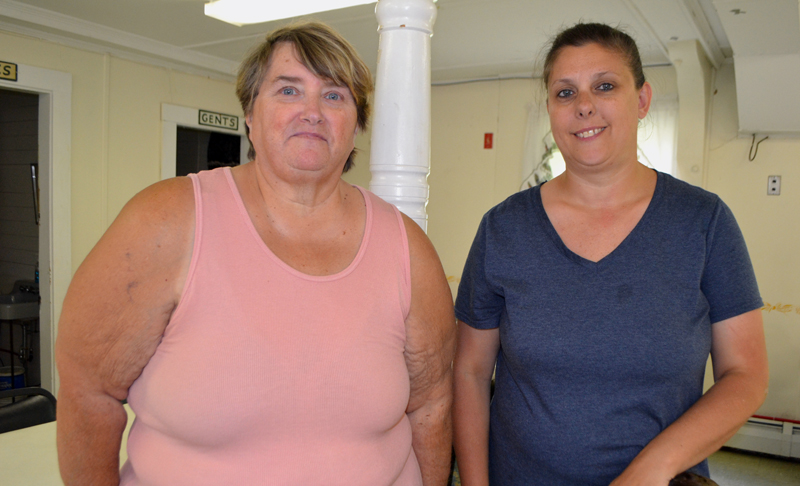 Lisa Marr (right) will coordinate a Toys for Tots campaign in Lincoln County this year, with Sharon Morton as her assistant. (Charlotte Boynton photo)

After several years without a Toys for Tots campaign in Lincoln County, two members of Wiscasset’s Huntoon Hill Grange will take on the challenge this year.

Lisa Marr will serve as coordinator and Sharon Morton as her assistant. Lincoln County residents have had to go through the Knox County campaign in recent years.

The Lincoln County campaign will be one of 817 in the U.S. this year, according to retired U.S. Marine Corps Lt. Col. David Cooper, vice president, operations, of the Marine Toys for Tots Foundation.

Toys for Tots began in 1947, when a major in the U.S. Marine Corps Reserve, inspired by his wife, collected and distributed 5,000 toys to less fortunate children in Los Angeles.

The community engagement was such a success in LA, the commandant of the Marine Corps ordered a national campaign the next year. The campaign has continued every year since.

The Marine Toys for Tots Foundation, a 501(c)(3) public charity established in 1991, helps run and support the program.

The Marine Corps has authorized civilian organizations and volunteers to coordinate campaigns since 1996. All civilian coordinators must apply annually to lead a campaign and undergo a background check before approval by the foundation.

Marr recently learned that she had cleared her background check. She will attend training in Leesburg, Va. in September.

The annual training covers the mechanics of a campaign: how to handle funds, make purchases, submit receipts, and more.

“The goal of our program is, through the gift of a new toy, to help bring the joy of Christmas and send a message of hope to America’s less fortunate children,” Cooper said in an email.

Marr got involved in the Toys for Tots program last year by volunteering with the Knox County campaign. She noticed that the low-income families that benefit from the program had to travel to Rockland to pick up their children’s gifts.

“It was difficult for many of them,” she said. After thoughtful consideration and discussions with her husband and Morton, she decided to become a coordinator.

The collection boxes for new toys will go out Oct. 1. Marr asks anyone who wants to have a collection box to call her at 350-5623.

If anyone wishes to donate new toys in the meantime, they should call Marr to arrange a time to deliver them to the Huntoon Hill Grange.

The Grange has served the Wiscasset community since 1902. For many years, it has had a weekly bingo on Monday evening as its fundraiser, with the doors open at 4 p.m. and the bingo beginning at 6 p.m.

Lisa Marr’s husband, Russell Marr, is the current president of the Huntoon Hill Grange and a strong supporter of the Toys for Tots campaign.

Lisa Marr is asking the public for help in the way of fundraising suggestions and other support. Her goal is to have a successful campaign to benefit the children of Lincoln County.

“With the help of the community, we can make this a great year for the children of Lincoln County,” she said.

Each campaign determines the eligibility criteria for families to receive toys for a child or children. Campaigns work with local social service agencies to make this determination, which is based on financial need.

Applicants can register with local social service and support agencies to develop a list of families requesting support.

Service members who meet criteria may qualify. To lessen the appearance of favoritism, it is suggested that service members register and accept gifts in the same manner as other recipients.

“The Marine Corps, specifically Marine Corps Reserve, mobilizes annually to help those children who might otherwise not have toys at Christmas,” Cooper said. “I am confident (Marr) is up to the challenge of providing that message of hope to the families in Lincoln County!”