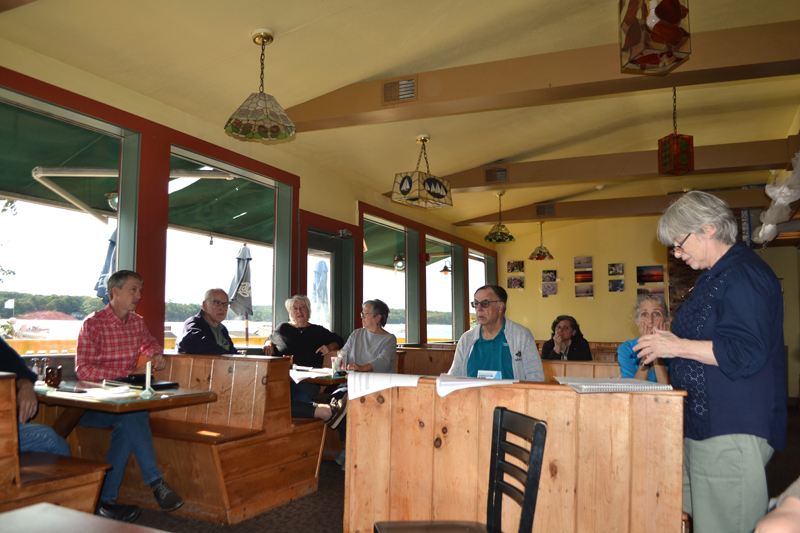 The Wiscasset Village Working Group meets at Sarah’s Cafe on Friday, Sept. 21. The group will promote the town and its businesses during and after the ongoing construction downtown. (Charlotte Boynton photo)

A new group has formed to promote downtown Wiscasset during and after the Maine Department of Transportation’s construction project.

Barnes presented a potential logo for signs to promote the town and its businesses. The tag line on the logo was “Wiscasset: old charm, new vibe.”

Some members of the group said the illustration and tag line do not adequately capture what Wiscasset offers, such as its history, its beauty, its proximity to the river, the walkability of its downtown, or the types of businesses it has.

Group member Robert Bond, a new homeowner and resident of Wiscasset, was asked to create different logos and photos.

The group has reached out to other businesses and residents to offer feedback on the tag line before its next meeting.

The group discussed plans for a Facebook page and the use of other social media to promote the town, as well as public events and business promotions.

The DOT construction project began in June. Work is expected to continue until October 2019.

The project will eliminate parking on Main Street, against the wishes of many business owners.

The Wiscasset Village Working Group’s mission is to promote the businesses during and after construction and to inform the public about what businesses are doing to survive through the construction.

The group plans to make a decision on its logo and tag line at its next meeting.