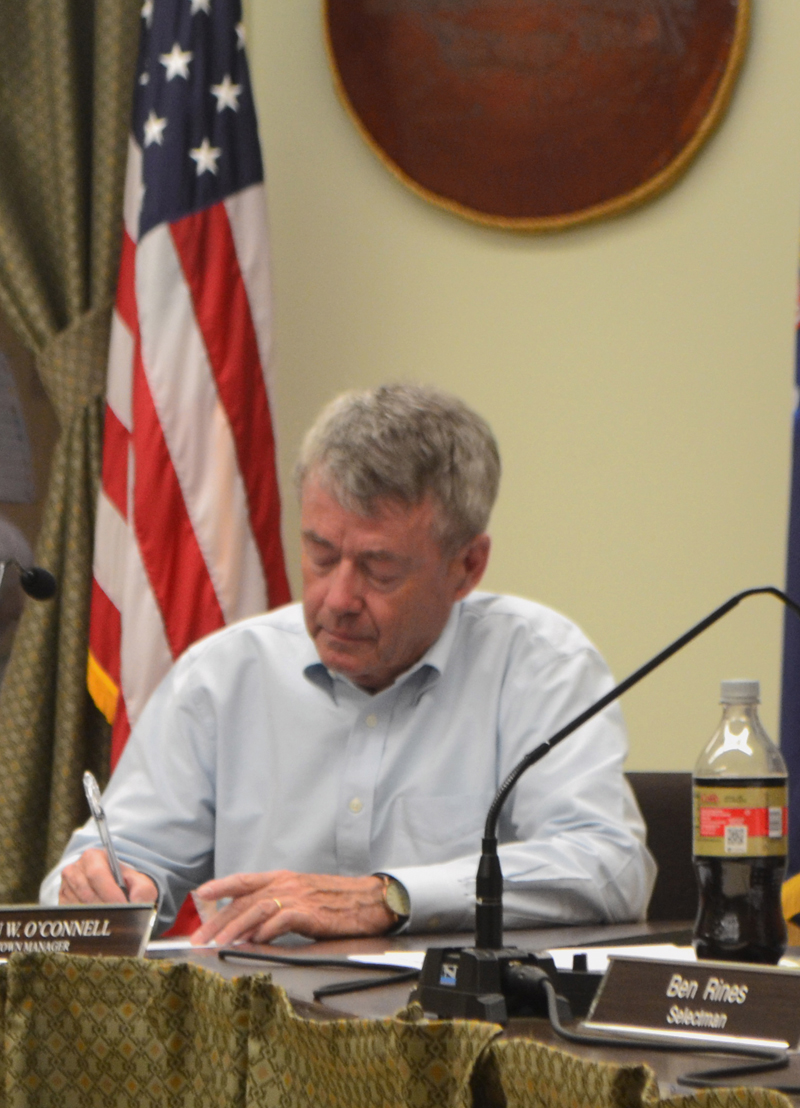 A motion to hire O’Connell on a one-year contract with an option to extend the contract for another year carried 5-0. O’Connell accepted the position and thanked the selectmen for their support.

The vote followed a closed-door session.

Tuesday’s meeting was the last for Selectman Robert “Bob” Blagden, and his departure did not go unnoticed. Selectman Katharine Martin-Savage asked that the meeting be dedicated to him, calling him a true gentleman and a wonderful friend.

“I expect you will be back with us again,” Rines said with a chuckle.

A 30% increase in sewer fees will take effect July 1, after action by the selectmen May 21 and June 4.

The selectmen awarded the contract for cleanup of the ash pools at Mason Station to Ransom Consulting Inc. for $455,000.

The contract price is $55,000 over the $400,000 in U.S. Environmental Protection Agency grants the town received for the work.

O’Connell said there are other grants the town can apply for and Ransom representatives have committed to helping the town obtain other grants. 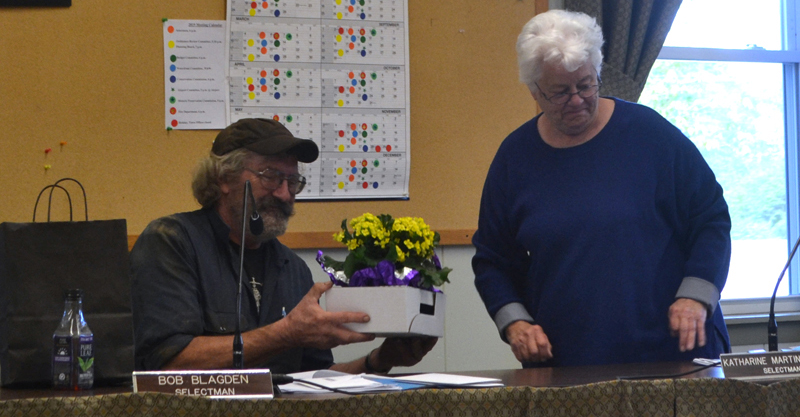 Outgoing Wiscasset Selectman Robert Blagden accepts a gift of flowers from Selectman Katharine Martin-Savage in appreciation of his service to the town. (Charlotte Boynton photo)

Wiscasset Code Enforcement Officer Bruce Mullins sent a letter to Albert and Starr Pinkham, of 49 Old Dresden Road, regarding several violations on their property, including the presence of several unregistered vehicles.

The Pinkhams do not have an automobile graveyard or junkyard permit, according to Mullins.

Mullins told the Pinkhams to have their property in compliance by May 17, or he would refer the issue to the selectmen. Mullins said the Pinkhams have several violations dating back to Dec. 1, 1990.

On May 5, Starr Pinkham sent a letter requesting an extension, saying her husband was sick.

After a lengthy discussion, the selectmen voted 3-1-1 to turn the issue over to their attorney to do whatever is necessary to ensure compliance and to have Mullins contact the Maine Department of Environmental Protection.

The selectmen appointed Phil DiVece to the historic preservation commission for a three-year term.

The selectmen gave Town Treasurer Vernice Boyce direction regarding tax-acquired properties. Some will go to bid and others need further research.

Selectman Kim Andersson updated the board on the Fourth of July celebration. This year’s theme is Yankee Doodle.