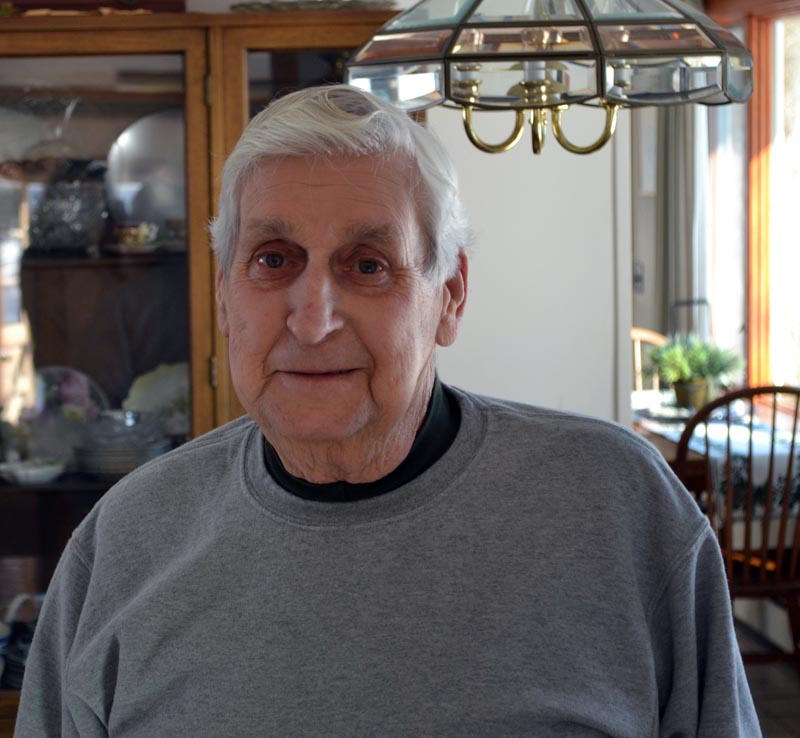 The pews at the Wiscasset First Congregational Church were filled nearly to capacity on Saturday, May 7 for the memorial service honoring the late Lawrence “Larry” Gordon, a dedicated public servant who passed away, April 7.

The service included remembrances from his two granddaughters, Lindsey Gordon and Kayla Gordon, a eulogy from his son Matt Gordon, fire department honors by the Wiscasset Fire Department, a Mason service by Lincoln Lodge No. 3 AF & AM, a message from the Rev. Amy Lignitz Harken, and music by organist Joel Pierce.

Those who knew Gordon have said he was a man that did not measure a person’s character by their social standing or their financial ability. He was always willing to be a friend or mentor to anyone he met, a characteristic that has been reflected many times by his friends, fellow selectmen, former town officials, and family members.

Gordon’s youngest granddaughter, Lindsey, honored him by reading a letter she wrote to him.

“Dear Bampa, There are a lot of good men left in this world,” Lindsey Gordon said. “But on April 7, 2022, this world lost a great one, because we lost you. Without you here, now the rain seems to fall a bit heavier, and the stormy days feel a little colder, now the sunsets mean something to me they never did before, because in them I see you.”

In her letter, Lindsey Gordon went on to say she wished he could have been to her college graduation last week, seen her say “I do” at her wedding someday, and that her children would have the opportunity to experience his love firsthand and know the man that impacted her life growing up.

“I am forever grateful,” Lindsey Gordon said, “for the memories. Playing with the Lincoln Logs on the back deck in the summer and sledding on the back hill in the winter. Taking my sister and me out for breakfast every ‘late start Wednesday’ before school, and ordering the ‘geezer special’ every time.

“Well, Bampa, as my quarter supply trickled thin, so did your time here on Earth with us,” Lindsey Gordon said. “I’ve brought you one back empty, waiting for the day we can fill it together.”

Kayla Gordon, Larry’s oldest granddaughter, described her grandfather as a man dedicated to his family, his friends, and the community with a spirit that will stay alive in the hearts of many.

“Future generations will grow up hearing the stories we all got to live through and your legacy will live on,” Kayla Gordon said.

She reminded those present at the memorial service of just how lucky the town of Wiscasset was to have a leader and a forward thinker at the helm during the 27 years her grandfather served on the select board and how he continued to serve the town for years beyond his time as selectman.

“There won’t be a day that does by that we won’t miss you, or look back on fond memories,” Kayla Gordon said. “The hardest part of getting older is having to find the courage to live without the ones you love the most and letting them go when their time comes. The greatest gift and the biggest heartbreak were believing you’d live forever, but how lucky are we to have loved and be loved by you.”

The eulogy was given by Gordon’s son, Matt, who said he did not know if it was possible for him to do his father justice in giving the eulogy, but he would give it his best.

Matt Gordon said his father had a modest upbringing in the rural town of Strong. As a son of mill workers, hard work was instilled in Gordon at a young age, as he was given many chores to help the family maintain the farm and homestead. He had an older brother and two younger sisters.

Apparently as teenagers, Gordon and his brother occasionally made mischief. According to Matt Gordon, his dad told him a story about how he and his brother would take joy rides in the family vehicle around the farm and neighboring roads, without the knowledge of their parents. They would hatch a plan to mark the dirt in the driveway so they would know where to return the car back to the exact location. 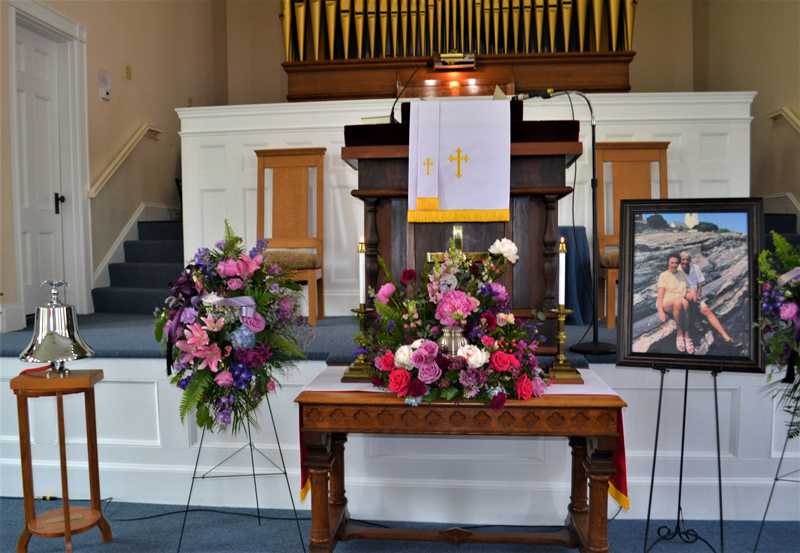 The altar at Wiscasset First Congregational Church during the memorial service for Lawrence “Larry” Gordon on Saturday, May 7. (Charlotte Boynton photo)

It worked until one day they got the car stuck on a stone wall.

“Needless to say Grandpa’s belt had a second use that day,” Matt Gordon said.

In high school Gordon began dating Norma, later to become his bride on August 5, 1961. The couple moved to Wiscasset, and Gordon began work in an accounting field in Brunswick, before quickly transitioning into his own business.

According to Matt Gordon, other people and the newspapers have done a good job remembering and recapping many of his father’s accomplishments over his years of service.

“I’d just like to convey the amount of dedication and time he spent serving our community,” Matt Gordon said. “The portions of Wiscasset and its infrastructure that he touched and help cultivate were endless, from the fire department, ambulance service, treatment plant community center, the list goes on … right down to helping Mom water the flowers around town in our old (Wiscasset Fire Department’s) brush truck. Dad didn’t know it, but Mom said she would say a silent prayer before each trip that the sputtering truck would make it back to the station.”

Shortly after Gordon was elected selectman for the first time, over 40 years ago, he came home and asked Norma if she would accept an appointment for couple of years on a new town committee called the beautification committee.

“Sure,” Norma Gordon said. “He helped me so much. I am not sure if he knew it or not, but we made him an honorary member of the committee.”

“For me, Dad was a rock,” Matt Gordon said. “A steady presence, the glue that kept things together. From my T-ball days, throughout all my school years, and until the present day, he has always been supportive and engaged in my life.”

“I will go so far to say that Dad’s devotion to Wiscasset will never be matched,” Matt Gordon said. “We can, however, try to carry on his legacy even to a small degree by serving our communities, loving our families, and keeping his memory alive. So when you all have a moment to yourselves. Take a minute and think back to a fond time, or event you shared with Dad and smile. Just know that he was just as happy to be there with you as well.”

Gordon was honored by the Wiscasset Fire Department by the ringing of the bell with three rings. A bell ringing three times represents the end of the emergency and the return to quarters.

A Masonic service was conducted by members of the Lincoln Lodge No. 3 AF & AM.