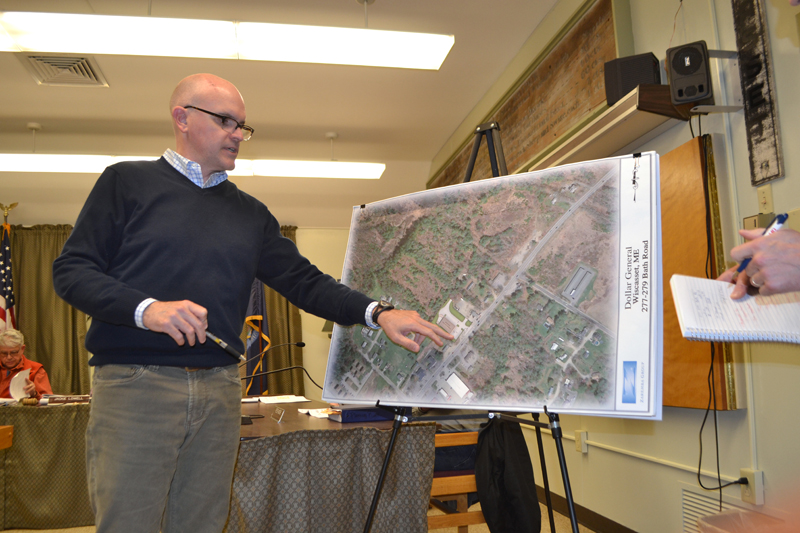 Matt Casey, of Zaremba Program Development LLC, presents plans for a Dollar General store at 277-279 Bath Road during a public hearing at the town office Monday, March 11. The board approved the project. (Charlotte Boynton photo)

After a 23-minute public hearing and further discussion, the Wiscasset Planning Board approved an application to demolish the former Huber’s Market and build a Dollar General store in its place Monday, March 11.

The board approved the application on the condition that the developer acquire all necessary federal and state permits.

According to Matt Casey, of Zaremba Program Development LLC, and Nobis Group engineer Chris Nadeau, the project has permits from the U.S. Army Corps of Engineers and the Maine Department of Environmental Protection. They are waiting for another DEP permit, for a storm drain; and for the Maine Department of Transportation to approve a driveway plan.

According to Casey, construction will begin in June with completion expected by late September or early October.

The 9,100-square-foot store will sit on a 1.4-acre property on Route 1, with 34 parking spaces. The building will be set back 75 feet from the state right of way and will share a driveway with Ship’s Chow Hall.

The lights in the parking lot and the sign in front of the building will turn on a half-hour before the store opens and turn off a half-hour after it closes, according to Casey.

The store will be open seven days a week from 8 a.m. to 10 p.m., though the hours may change after a few months. The store will employ eight to 12 people, more during the holidays. 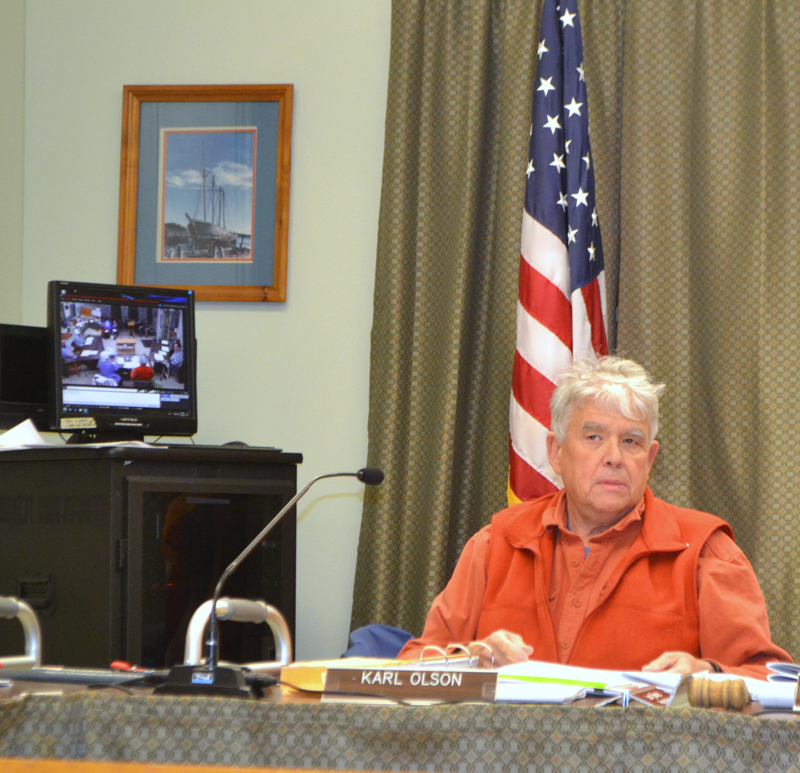 Karl Olson chairs a meeting of the Wiscasset Planning Board on Monday, March 11. The board elected Olson to replace Ray Soule, who recently resigned. (Charlotte Boynton photo)

After reviewing the plan, the planning board asked if the developer could make the access way 36 feet wide. “We can’t force you to do that, but we would appreciate it,” board Chair Karl Olson said.

Casey and Nadeau agreed to increase the width.

The planning board also approved a waiver regarding the slope of the driveway.

Nadeau said some trees on the site may be taken down before construction starts.

After the board voted to accept the application as complete, board member Al Cohen made the motion to approve the project with conditions. The motion passed, 6-1, with Putnam opposed. Board members in favor were Cohen, Jackie Lowell, Peter McRae, Lester Morse, Olson, and Deb Pooler.

“It is not the right kind of business for the town,” Putnam said after the meeting. “It will not offer good jobs, only two or three full-time positions.”

He said there is already a dollar store in Wiscasset – Family Dollar – and questioned the need for another one. Although opposing the project, he said the new store will improve the town’s tax base.

Dollar General is a convenience store, but not everything in the store is $1. The store’s inventory is about 40 percent groceries, according to Casey. Other merchandise includes over-the-counter medications, household items, paper goods, snacks, health and beauty products, greeting cards, and beverages.

Dollar General Corp. has about 20 stores in Maine and, according to its website, more than 15,000 in the U.S.

At the beginning of the meeting, the board elected Olson as its new chair. Olson replaces longtime member and Chair Ray Soule, who recently resigned. The board elected Putnam vice chair.

Cohen recognized Soule for his many years of service on the planning board.