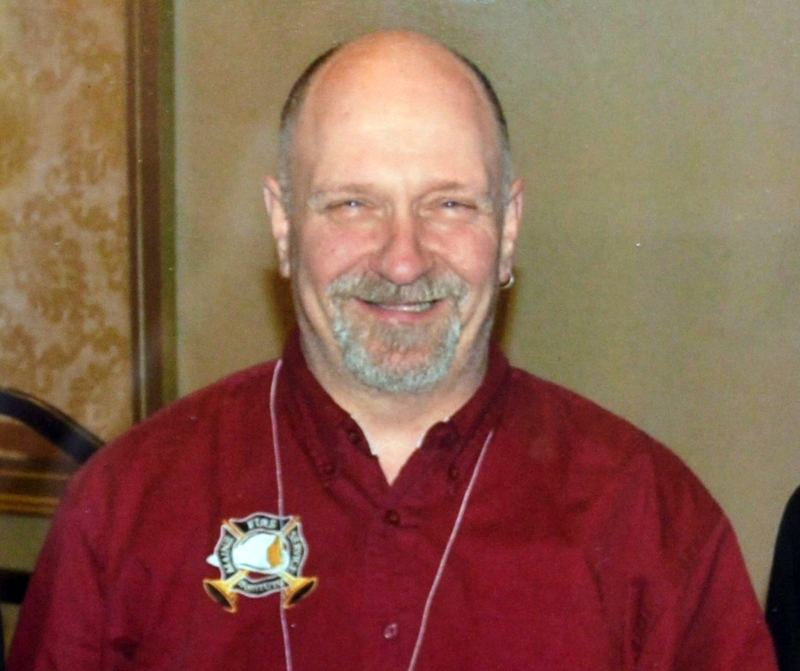 Peter Rines passed away on Sept. 8, at the age of 59. This photo was on display at his celebration of life, held at the Wiscasset Fire Department on Sunday, Sept. 19. (Charlotte Boynton photo)

Traditions dating back to over 150 years were bestowed on the late Peter Rines on Sunday, Sept. 19, at the Wiscasset Fire Department, during the celebration of his life, including the aerial ladders cross, bagpipes, and the ringing of the bell. Eulogies and the Fireman’s Prayer were recited, as well.

Well over 100 people attended the service, including fire chiefs and firemen from many local departments, Masons, family and friends. They gathered to say good bye to a man who dedicated his life to his community and to his state.

In 1998, Peter became a fire service instructor with the Maine Fire Service Institute, traveling throughout the state helping departments certify their firefighters. In 2000, Pete was elected to serve two terms in the Maine House of Representatives, representing the towns of Wiscasset, Alna, Whitefield, Somerville, Hibberts Gore, Randolph and Pittston.

Two ladder trucks form a cross over U.S. Route 1 in Wiscasset on Sunday, Sept. 19, during the celebration of life to honor the late Peter Rines. The crossed ladders is a symbol of a bridge to a deceased fireman’s next life. (Charlotte Boynton photo)

Peter also tipped his hand in carpentry. The podium used at the celebration of his life was built by him.

The service was opened by the music of bagpiper David McLean, and a welcome from Wiscasset Fire Chief Rod Bickford.

Graves credited Peter with raising the bar for the Maine Fire Service in 2001 by playing a major role in the first Maine State Fire Officer Academy. As a result the quality of fire training was elevated around the state of Maine. 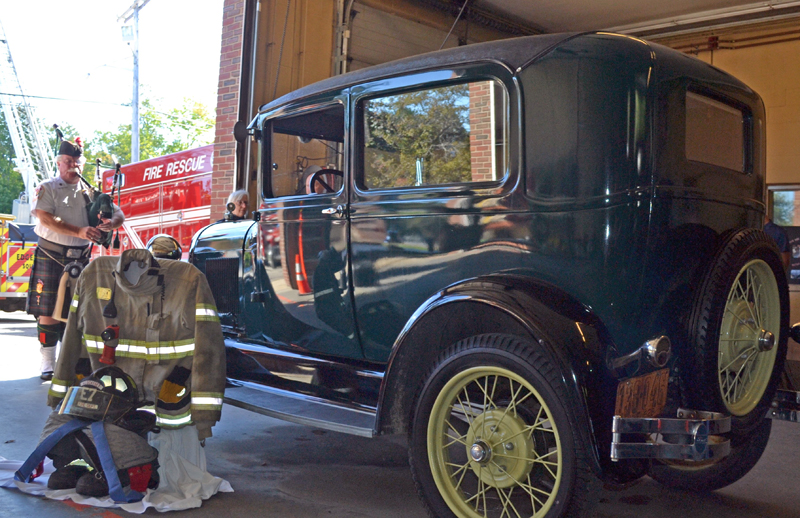 The turnout gear of the late Peter Rines was displayed next to his antique car during the celebration of his life, held at the Wiscasset fire station, while David McLean played “Amazing Grace” on the bagpipe. (Charlotte Boynton photo)

“Peter was a huge part of so many people’s lives and the impact he had was far reaching, as will be felt for many years to come. It is fair to say that Peter Rines, in his professional capacity touched the lives of tens of thousands of Maine fire chiefs, fire officers and firefighters” Graves said. “He was a staple in fire service training for as far back as anyone can remember.”

“He will forever be memorialized in our hallways at MFSI for all the hard work and contributions to Maine fire service training, We will miss him dearly,” Graves said.

Heinig said Peter was her boss for the last nine years, and he became more of a friend than a boss.

“I want everyone to remember Peter’s integrity, reliability, his light-hearted manner, and constant upbeat demeanor,” Heinig said. “So be like Peter, have fun, find joy in everything, love one another, and be kind.” 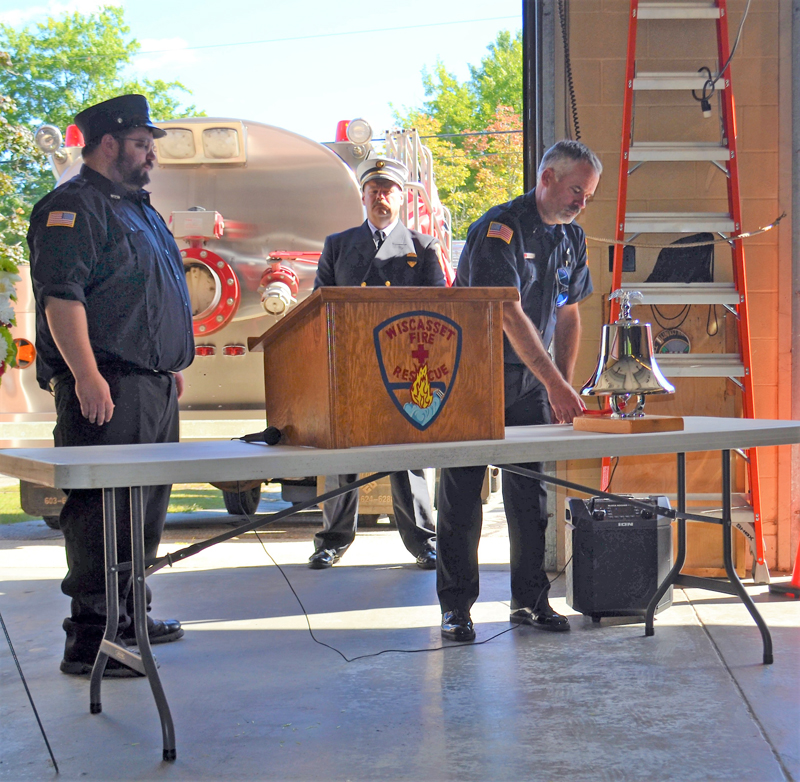 Willis said Peter led by his service, “He was a service leader, and the services he provided will long be remembered in by the fire services.”

Following the eulogies, the ringing of the bell ceremony was held, a memorial service or funeral tradition in fire departments for over 200 years. It was conducted by Firemen Dan Averill and Matt Gordon. The ringing of the bell with three single rings, three times, symbolizes a fireman’s last call.

The Fireman’s Prayer was read by Chief Bickford: “When I am called to duty God; Wherever flames may rage; Give me the strength to save some life; Whatever be its age; Help me embrace a little child; Before it is too late; Or save an older person from the horror or fate; Enable me to be alert and hear the weakest shout; and quickly and efficiently to put the fire out; I want to fill by calling and to give the best in me; To guard my every neighbor and protect their property; and if according to your will I have to lose my life: Please bless with your protecting hand; My family from peril and strife.”