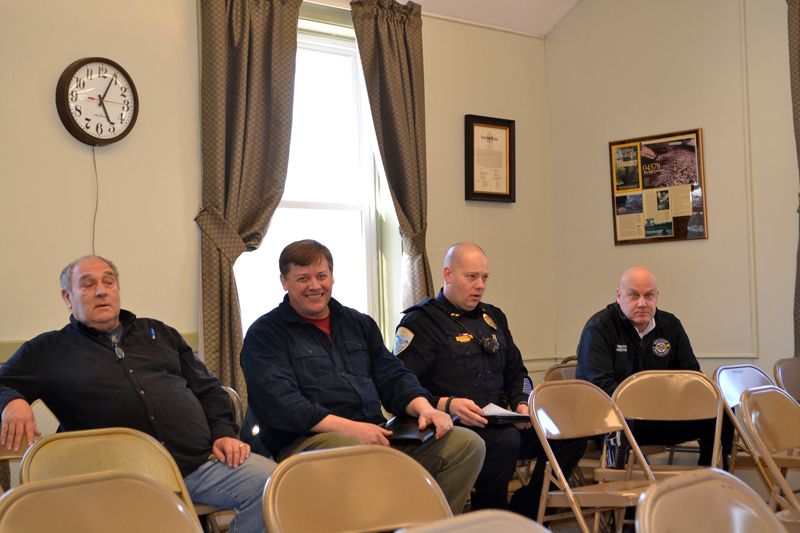 The Wiscasset Board of Selectmen, on Monday, March 26, reversed its decision to ask voters whether they want to eliminate the Wiscasset Ambulance Service and Wiscasset Police Department.

During a March 15 budget workshop, Selectman Jefferson Slack made a motion to place the questions on the warrant. Selectman Benjamin Rines Jr. seconded the motion and the board approved it 5-0.

At the March 26 meeting, board Chair Judy Colby made a motion not to place the questions on the warrant. Rines seconded the motion and the motion carried, 4-1, with Slack in opposition.

The vote followed a lengthy discussion on the proposed articles.

Rines said he is in favor of researching the cost of going with a private ambulance service and eliminating the police department in the future when the board has alternatives to offer the voters and the cost to provide those services, which currently the board doesn’t have.

Colby said she had voted previously to put the articles on the warrant, but she would never vote to eliminate the police department.

Selectman Robert Blagden said the savings from going with a private ambulance service would be beneficial to the town, and asked the town manager to arrange a meeting with a representative of Central Lincoln County Ambulance Service Inc. as soon as possible.

At the town’s request, CLC Ambulance has submitted a proposal to provide ambulance service in Wiscasset.

Wiscasset Budget Committee member Kim Andersson criticized the vote. “This does not feel right, to do this after the director has left,” Andersson said.

After a brief discussion, the selectmen made no changes to the parks budget of $815,000, which had already been reduced by $93,000 at their previous meeting. The 2018-2019 revenues for Parks and Recreation are estimated to be $450,000. The proposed budget shows a decrease of 1 percent.

The selectmen made some cuts and additions to their capital improvement plan for the voters to decide.

Currently the selectmen plan to take $1 million from the reserve account to fund capital improvements and to lower taxes.

After discussing the condition of the driveway going into the Wiscasset Community Center, the selectmen added $20,000 to repaving cost on the Capital Improvement plan.

The selectmen will hold a public hearing on the upcoming referendum regarding the town’s lawsuit against the Maine Department of Transportation at the Wiscasset Community Center at 6 p.m., Tuesday, April 3.

On April 17, voters will consider the following question: “Do you wish to continue with the lawsuit filed by the town of Wiscasset against the Maine Department of Transportation regarding the Wiscasset Downtown Project?”