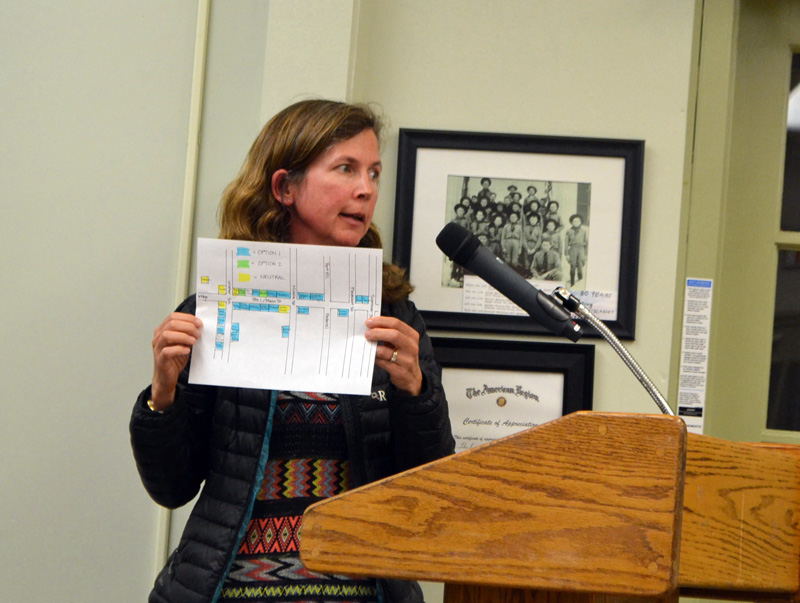 The votes followed comments from several business owners and residents concerned about their businesses and the future of downtown.

Resident Seaver Leslie, a member of the project’s local advisory committee and of the group Citizens for Sensible Solutions, told the selectmen the removal of storefront parking will have a severe impact on small businesses.

Sen. Dana Dow and Rep. Jeff Hanley have submitted a bill to the Legislature to instruct Bernhardt to cease moving forward with Option 2 because of the threat it poses to Wiscasset’s economic vitality.

Erika Soule, owner of Rock Paper Scissors, said, “I have had my shop in the downtown for 17 years. I truly believe that MDOT’s plan to remove parking will kill my business. It is disheartening to know that the town in which I grew up and have decided to invest my life in doesn’t care if my business lives or dies.”

Keith Oehmig, owner of the Wiscasset Bay Gallery, told the selectmen he has been a Wiscasset business owner for 32 years.

“Our customer base is largely too old to walk all the way from a parking lot on Railroad Avenue up the hill to Main Street,” Oehmig said. “Many businesses in downtown Wiscasset are planning to leave Wiscasset if we lose our parking on Main Street … Unfortunately, I don’t think the village of Wiscasset can survive in any healthy form without a prosperous downtown.”

Bruce Marcus, who operates an antique shop and bookstore on Water Street, said he thinks the removal of on-street parking could cause a downward spiral in the local economy.

Wiscasset resident William Sutter urged the selectmen to stand up for the citizens of Wiscasset against the traffic project. “You need to look out for the interests of Wiscasset,” he said.

Selectman Katharine Martin-Savage said, “MDOT’s job is to move traffic. Our job is to take care of our citizens.”

Selectman Benjamin Rines Jr. made a motion to oppose the removal of any parking spaces in Wiscasset. After a brief discussion, Chair Judy Colby called for the vote. The motion carried 3-2, with Colby and Jefferson Slack in opposition.

Rines also moved to schedule the meeting with LePage and Bernhardt. That motion carried 5-0.

Wiscasset Town Manager Marian Anderson pointed out the number of letters the selectmen have received from at least 10 business owners expressing their concerns about Option 2’s potential impact on their businesses.

The selectmen urged members of the public to attend the DOT informational meeting at Wiscasset Elementary School from 6-8 p.m., Thursday, Oct. 5.

In other business, the selectmen appointed Preston Dunning to the budget committee and Marian Anderson as deputy code enforcement officer and alternate plumbing inspector.

The selectmen approved an application from the Wiscasset Speedway for a special amusement permit following a public hearing on the application.