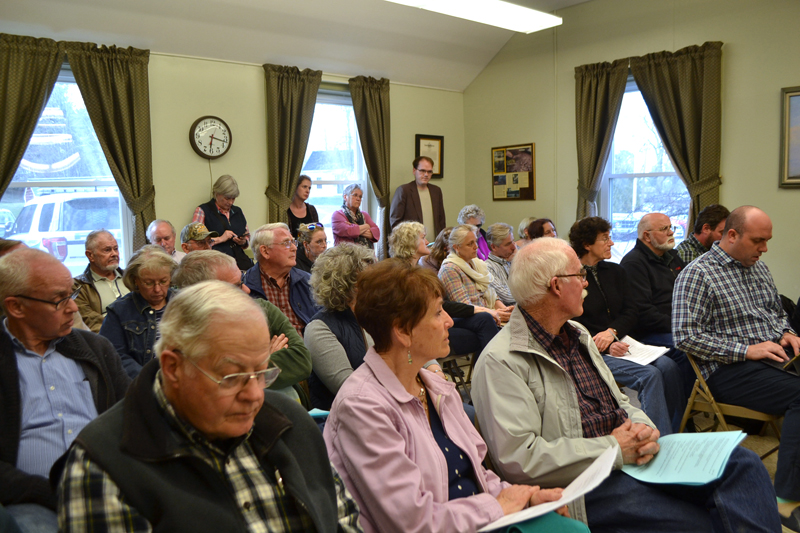 There was standing room only at the Wiscasset Board of Selectmen’s meeting Tuesday, April 24, the first meeting after the vote to stop the town’s lawsuit against the Maine Department of Transportation. (Charlotte Boynton photo)

The Wiscasset Board of Selectmen voted to dismiss the town’s lawsuit against the Maine Department of Transportation without prejudice Tuesday, April 24.

The selectmen had a full house and a full agenda for their meeting, with standing room only in the meeting room at the municipal building.

Selectman Benjamin Rines Jr. made the motion to dismiss the lawsuit against the DOT without prejudice.

Selectman Katharine Martin-Savage suggested that the board wait until the town receives a decision from the Maine Business and Consumer Court regarding the town’s motion for a preliminary injunction that would require the DOT to abide by the town’s historic preservation ordinance before it moves forward with the Option 2 traffic project.

Rines said the voters made it very clear in their vote April 17 that they did not want the town to continue with the lawsuit.

Selectman Robert Blagden asked what the process would be to dismiss the lawsuit.

Board Chair Judy Colby read an email from one of the town’s attorneys,  John Shumadine, outlining the process.

During discussion of the motion, two members of the public expressed their opinions.

Former Selectman David Cherry said the voters were clear on what they wanted and the board should vote to dismiss the suit.

Wiscasset resident William Maloney agreed with Martin-Savage that the board should wait until the decision from the court comes down.

After a brief discussion, the selectmen voted 4-1 in favor of the motion to dismiss without prejudice. Martin-Savage voted in opposition.

The selectmen agreed to Rines’ suggestion.

Colby said a meeting with the governor would give the town an opportunity to let the Governor know how residents feel about the DOT’s plans.

Town Manager Marian Anderson asked the selectmen whether the town should revive the public advisory committee meetings with the DOT in an effort to keep lines of communication open. The selectmen agreed.

The town manager told the selectmen she would meet later in the week with representatives of the Federal Aviation Administration regarding stalled progress in efforts to obtain an aviation easement from Chewonki Campground.

According to Anderson, the town has 30 days to submit a corrective action plan or the airport will be placed in noncompliance.

A letter from the FAA to the town informed the town that, until there is an easement, it will not receive FAA funds.

The easement would allow the cutting and pruning of several trees at the campground to keep the airport’s flight path clear of obstructions.

Wiscasset School Committee Chair Michael Dunn presented the 2018-2019 school budget to the selectmen and requested and received the OK to hold the budget meeting in the Wiscasset Middle High School gym at 6 p.m. May 16.

The selectmen approved a new business license for Megan Olcot to operate an ice cream shop and bakery at 49 Water St., and approved pier vendor permits for Frank Sprague, of Sprague’s Lobster, and Ronald Leeman, of Forgotten Recipes.

The town manager reported on letters received by the town over the past week, including a letter from attorney David Soule informing the town that an escrow account established by Ralph H. Doering III, with a $75,000 deposit to pay for the town’s legal fees in the lawsuit against the DOT, had been closed due to the vote April 17.

The town manager reported on a letter to two of the town’s attorneys, Peter Murray and Shumadine, from another of Doering’s attorneys, Robert Hark, advising the town that dismissal of the lawsuit with prejudice could cause long-term adverse effects.

Finally, Anderson reviewed a letter to Hark from Nathaniel Rosenblatt, an attorney for the DOT. Rosenblatt said the DOT “plans to proceed with the work that has been put out to bid. That work includes, in the Railroad Avenue area, 58 parking spaces (two of which are for buses) and a loading/unloading zone. That work also includes repaving and striping 12 existing parking spaces on Creamery Wharf.”

The selectmen made the following appointments: Phil Di Vece to the conservation commission, Steve Williams to the airport committee as a non-voting member, and Lynn Pelletier to the Cooper DePerri Scholarship Committee.

After a public hearing, the selectmen approved a liquor license for the Sea Basket Restaurant, which is under new ownership. It is now owned by Louis Rylant.