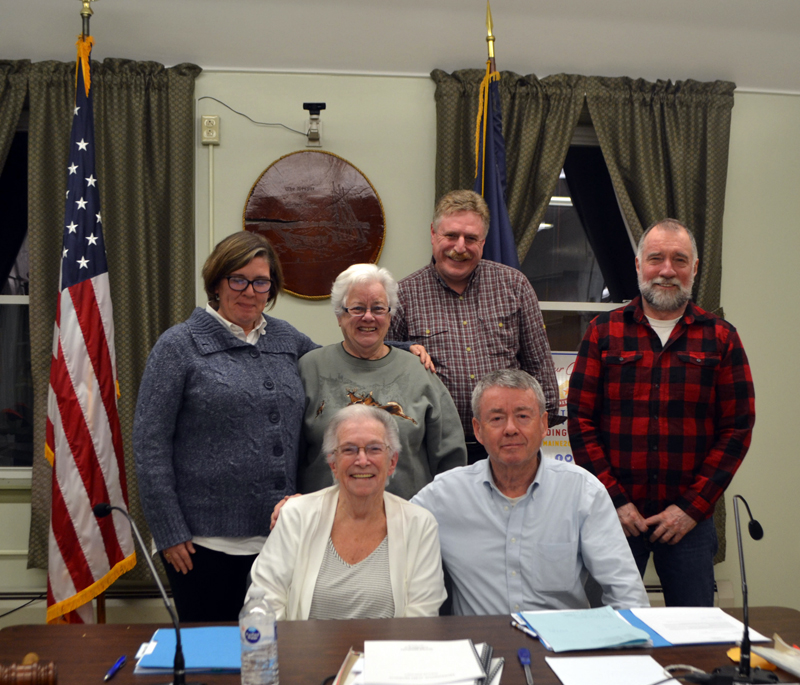 The Wiscasset Board of Selectmen poses for a photo with Town Manager John O’Connell after his announcement of his resignation Tuesday, Feb. 4. Front from left: Chair Judy Colby and O’Connell. Back from left: Selectmen Kim Andersson, Katharine Martin-Savage, Jefferson Slack, and Benjamin Rines Jr. (Charlotte Boynton photo)

The Wiscasset Board of Selectmen accepted his resignation with regret Tuesday, Feb. 4.

O’Connell offered to continue as town manager until the first week of June, in order to prepare for the annual town meeting by referendum June 9.

“I have appreciated the strong support of the board for the past 12 months and have found the job to be both interesting and challenging,” O’Connell said in his resignation letter. “During that time I think it is safe to say that I have learned a lot about the town and its inhabitants.

“I am pleased that Wiscasset is experiencing a number of positive developments and wish the town a prosperous future, but I have a number of family and other commitments, including vice president of Boothbay Harbor Waterfront Preservation, that need my overdue attention.”

Selectman Benjamin Rines told O’Connell: “We are so much better off by having you serve as town manager.”

Board Chair Judy Colby told O’Connell she has enjoyed working with him.

O’Connell has a long history of public service, including time as a county administrator, county commissioner, and selectman in Boothbay Harbor.

The selectmen voted to terminate a lease with Don Falvey for property at the municipal airport.

The vote followed a report from Rick Tetrev, manager of the airport, who told the selectmen he had discussed the issue with a Federal Aviation Administration compliance officer.

According to Tetrev, the compliance officer directed the town to terminate the lease immediately.

In 2005, Falvey LLC entered into an agreement with the town to lease approximately 105,608 square feet of undeveloped land for the purpose of building aircraft hangers.

O’Connell will notify Falvey of the termination. The vote was 4-0-1, with Selectman Kim Andersson abstaining.

The selectmen voted to place articles on the warrant for town meeting that will determine whether the town “opts in” to allow medical and recreational marijuana businesses.

O’Connell told the selectmen that Kathleen and Thomas Bryant are suing the town for granting a fireworks license to Big Al’s Fireworks Outlet.

Thomas Bryant attempted to explain the suit, but the selectmen declined to discuss the issue.

The town received three bids for auditing services. The selectmen directed O’Connell to select the most qualified bidder.